$10 ARe Celebration Bash with Natasha Blackthorne's White Lace and Promises!!

Hello and Welcome!!  Today we are celebrating the fact that White Lace and Promises is going live on Amazon!!  WHAHOOOOOOOOO!!  Congrads Natasha!!!  She is so excited!!  And to celebrate, she is offering one lucky commenter a $10 ARe Gift card!!!  Let's take a look at the book: 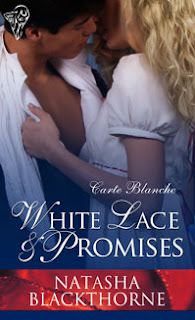 Shocked and hurt by Grey's distance, Beth wonders whether he truly returns the burning love she feels for him. Beth demands that Grey prove he can truly change once and for all or else she will not start a family with him. But will the dark, sensual secrets she yet keeps repel this arrogant, self-controlled gentleman she has married.

You can take a look at my review here: http://closeencounterswiththenightkind.blogspot.com/2012/01/white-lace-and-promises-by-natasha.html
You can get your own copy here:  http://www.total-e-bound.com/product.asp?strParents&CAT_ID&P_ID=1476
Now for the fun stuff!!  Just fill out the rafflecopter and good luck!!  Natasha will be at my good friend Queen Tutt's blog tomorrow!!  Stop by and check her out there: http://queentuttsworldofescapism.com/
__

I haven't Grey's Lady but I haven't read it yet I hope to do that very soon because it looks like an awesome read!

Thank you for such a long excerpt! Can't wait to read this book!
MJB
msjb65 AT gmail DOT com

"White Lace & Promises" Book Two in the Carte Blanche Series sounds like such a GREAT read that I have to get Book One, "Grey's Lady". Thank you Natasha for the wonderful giveaway for a $10 GC to All Romance E-Books.

I've been interested in trying out one of Natasha's books for awhile now, but just haven't gotten around to it. If I win the gift card, I will be able to get some of these wonderful looking books!

Great excerpt! Gratulations and thank you for the giveaway. :)