Giveaway and Review of C791 by Eve Langlais 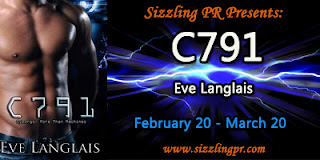 Hello CEWTNK!!  Today I have a tantilizing cy-borg story to tell you about.  I thought it was absolutely yummy!!  But I'll tell you more on my opinion later!!  Let's first take a look at the book details: 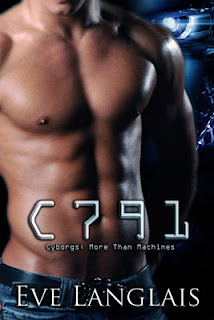 Machines aren’t supposed to feel, but this cyborg can’t help falling in love.
Assigned as a specimen collector for a captured cyborg, Chloe is intrigued by the machine disguised as a man. Kidnapped during his daring escape, he takes her on an erotic adventure and shows her that despite the chip in his brain, his humanity is not completely lost.
Formerly known as unit X109GI, Joe is on a quest to discover his origin. While he doesn’t find the answers he’s looking for, he does discover that affection and lust aren’t just for humans. But when it comes to a battle between logic and love, which side will the cybernetic organism--once a man--choose?
Evaluating his feelings will have to wait though, because the military isn’t done with Joe. When they threaten the one thing he wants above all else, he’ll discover something shocking that will rock the new cyborg nation—and fuel a desire for vengeance.
Excerpt (Adult Content Ahead):
The sight of Chloe and Seth so at ease with each other, and worse, touching each other set something off inside Joe, a combination of irrational anger sprinkled with a covetousness he’d not experienced but had heard of. Jealousy.
Whatever the name for the emotion, he found himself unable to halt it as he ripped Seth away from Chloe’s side and sent his fist into the grinning face. He maintained enough control to not beat his friend to a pulp — barely — but he couldn’t stop himself from slinging Chloe over his shoulder and stomping off to their room.
“What the heck was that about?” she exclaimed as she dangled down his back.
“You seem to have forgotten who you belong to.”
She didn’t say anything for a moment. “Are you jealous?”
“No.” Yes!
“It’s normal to feel that way. It just never occurred to me you would.”
“I don’t. Jealousy is a human emotion. I am a cyborg. We are above such petty wastes of our time.”
“Really. Well then, someone should probably explain that to Seth’s face,” she drawled.
“This is not entertaining. You were practically inviting him to take ownership of your body.”
“I was not,” she exclaimed, and a small rational part of him knew she spoke truly, but he’d lost the ability to decipher logic from madness where she was concerned.
Arriving at their room, he tossed her onto the bed and quickly tore at his clothes.
“What are you doing?” she asked, her eyes wide, but not with trepidation if the protruding nipples through her shirt were any indication.
“Showing you who owns your body.”
“Me.”
“Wrong answer,” he growled. “I do. And it seems I must show you.”
He fell on her, and despite her previous defiant answer, she welcomed him with open arms and a fierce kiss. Her legs spread wide to accommodate his body, but while he’d denuded his frame, she remained dressed. Their hands met at the closing to her pants, their impatient battle to remove them more of a fumbling parody. When he finally managed to strip them from her, he was ready to sink himself into her. He retained enough wits though to realize she required preparation for his penetration. With sex bots, that never proved a concern as they arrived to service pre-lubed. Human females however, according to his studies, required stimulation to achieve the same state. He slid a hand between her thighs and, to his relief, found her already soaking wet. It pleased him, on a level he did not understand, that Chloe achieved this state around him without means of manipulation.
He wasted no more time. He propped himself above her and thrust into her sex. Oh, the exquisite, unexplainable feel of her channel clamping tightly around his cock. He would never tire of it. Never tire of her. But did she feel the same about him? He had to know.
“Tell me who you belong to.”
Her eyes opened part way, her lids heavy with arousal. “Why do you care?”
He rammed into her hard. She gasped.
A growl left him. “Do not toy with me. You are my female. Not Seth’s. Not anyone else’s. Say you belong to me.” He almost roared the words, desperate to hear her say it.
For a moment defiance flashed in her gaze. “And if I don’t?”
My Review:

This was my first encounter with a cy-borg type book and I must say I loved it and it will most certainly not be my last!  Joe, our main cy-borg in this fast-paced short, was literally sex on a stick.  He didn't know it, but every other female around him did.  We start out with a little glimpse into how Joe came into being.  We get to know him before he was freed from the military's command and what it was like for him before he became his own master.  The cy-borgs were literally slaves and created from a combination of real man and machine.  Cy-borgs aren't supposed to feel any emotions.  But that all changes when a little female technician is assigned to take samples from Joe after he is captured.  Chloe literally makes him hesitate in his non-feelings theory.

To Chloe, this cy-borg is just another job.  Albeit a dangerous and absolutely terrifying job, but the way women were treated in a military base, it wasn't much better.  The only reason she was here was for the money they were offering her.  There was no way she could turn that down.  But something happens to Chloe the more time she spends with the prisoner, and she can't help but wonder who was the monster and  who was the injured party?  Surely something that expresses so much emotion and looks so absolutely sinful, can't really be the homicidal killer they claim him to be.   Or can he?

Bottom line...This was an excellent read.  Fresh story line, fast-moving, absolutely great sex scenes, and really heart-felt emotions.  You can connect with the characters, even if they are only supposed to be half human.  You feel their pain and marvel in the unique ways they are able to triumph over the military..lol.  Halfway through the story I am wondering if I am a traitor because I want the cy-borgs to win.  Shouldn't I  empathize with the humans?  Great book Eve!!  I seriously can't wait til the next one!

So how can you score a copy?  Easy!!  Just fill out the rafflecopter below!!  Good Luck!!

I think the only cyborg book I have read is Wired For Sex: ADAM. I don't think it's even published anymore. Can't wait to read C791. Sounds fantastic.

This book looks so good. A sexier version of one of Linnea Sinclair's heroes, maybe?

actually i have not read a cyborg type romance before but this one looks awesome. i love the cover, it's beautiful and the excerpt wa HOT. i look forward to reading the rest of the book and seeing what happens next.

I really enjoyed Kissing Steel by Laurann Dohner. This is book 2 in her Cyborg series.

Honestly I have none :/
I've not yet read any Cyborg books, but plan to chance that real soon ;)

I've never read a cyborg romance novel - but I'm VERY interested in reading this one! HOT, hot excerpt!! I've got it on my wishlist now :D

Thank you so much for the giveaway chance!

I have never read a cyborg book so I'm super excited about C791.

I've never read a cyborg book so I can't say....yet...with all the reviews of C791, this book sounds like a great read!

Great blurb and excerpt and review. I haven't read about cyborgs either, but I love Eve's books a whole lot. She a great author.
Please count me in as well..*S*
thank you!

I guess I'm kind of clueless because I didn't know of any cyborg romances. I just remember Data from Star Trek TNG and he didn't have any romances.

This does sound really good and I'd like to give it a try. The excerpt was so amusing. Thanks for sharing your review!

Shoot! I did read a cyborg-type story a few years back, but I can't for the life of me remember the name or author! I got it from Ellora's Cave and it was one of those Naughty Nooner shorts. Does this sound familiar to anyone out there??
I loved the excerpt and would love, love, love to win this book!!
MJB
msmjb65 AT gmail DOT com

I am a big fan of Eve Langlais & just off the top of my head I bought & enjoyed her "Alien Mate" Series, "Pack" Series, "Freakn' Shifters" Series, & her stand alone book "Scared Of Spiders", but I know there are more, just can't remember them without looking.

As for Cyborg-type Romance Novels that I have read...I also had to search my mind for that one & came up witha couple...but they may not appeal to everyone's interest...I thoroughy enjoyed them though, VERY SMOKIN' HOT!!

"Soothe The Burn" by T. A. Chase (Amber Allure) M/M Sci-Fi/Futuristic, Action, Adventure, Suspense, Thriller;…taken from the Author’s Blurb; “Can a man made of metal and a man struggling to control the fire inside his soul find common ground? Or will their love burn to ashes before they ever have a chance to discover it?”

"More than a Man" by Emily Ryan-Davis & Elise Logan, Paranormal Futuristic Romance; where a Bride can buy the man of their dreams by genetically engineering the perfect husband at Manporium……I Bet We ALL Wish This One Could Be TRUE!!!! LOL

Ok that's 4 I can think of off the top of my head. Thanks again for the Great Review of Eve's new book, it definitely sounds like an Exceellent read.

I would appreciate an opportunity to be included in the giveaway, Thank You.

To be honest, I don't have any cyborg book related book. So if I win this will be my first.

I have not read a cyborg type romance before, so this one was my first story about cyborg, of course if i win^^
From review, this one look interesting. can't wait to read it:)

I loved the cyborg series by Laurann Dohner. Thanks for the chance.

I don't think I've read one before. I used to like the very short lived program with Yancey Butler called Mann and machine. Boy, am I dating myself by typing that.

I've never read a cyborg type book before. This one sounds awesome!

Never read a cyborg book before but there's a first time for everything and this does sound good.

I have not read a cyborg book before but I would like to read this one. Thanks for the giveaway.

I've never read a cyborg book. I know them from Star Trek but that's my only experience with them.

I read this book ages n ages ago. All i remember was that it made me cry buckets (always a sign of a great bk): Silver Metal Lover by Tanith Lee.