Sneak Peek and Review of The Triaxen By: Ciara Lake 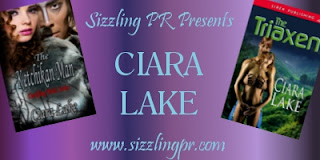 Hello and welcome to this stop on Ciara's Tour!!  I've had a ton of fun with The Triaxen and wanted to share my review with you!!  But first, let's check out the book details: 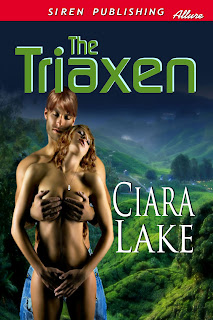 Krevan was one alpha male Triaxen, who had been alone for way to long.  Even though to him, it hadn't been long enough.  Betrayed repetitively by his former wife and sentenced to harsh punishment, Krevan had gone through severe changes.  Gone was the once gentle doctor he used to be and in his place had grown a full blooded predator with a major attitude and loads of anger.  Not a good combination to go along with all those enhanced abilities of his.  He had finally managed to sell the other house on his property and went to pick up the new owner at the spacestation.  Krevan hoped this would be a short trip and he could be back at his home before the rains started.  He was unprepared for the vision that presented herself as his new neighbor.  He had assumed that Ancelin was a male, not the vision of beauty that now stood before him.

Ancelin was running away.  The pain and nightmares followed her where ever she wandered on Earth, and her hope was that a fresh start would bring back some normalcy to her life.  Maybe, even a little happiness.  She was the sole survivor of  the massacre that killed her family and the one who happen to discover their bodies.  Those images haunted her non-stop.  Even though she was blown away by the beautiful God-like man who had introduced himself as Kraven.  Was she really going to live next door to him?

I enjoyed the many concepts in this book.  I love the idea of space travel and being able to pack up and leave Earth behind for one of the hundreds of other colonized planets.  That would be so exciting.  For Ancelin and Krevan, it was not.  Both came to this planet to escape the pain of the past.  Both needed each other to heal the hurts.  Throw that in with some smoking hot sex scenes and extremely volatile weather, and you have the premise for one amazing story!!  But Ancelin is far from forgetting about her past.  The evil that slaughtered her family has followed her to this new home.  Will the peace she has finally found remain constant?  Would Krevan be enough against all the men that were being sent to find her?  Awesome questions that you can only answer by reading this book!!  It was an adventure that I truly enjoyed!!