TAKE A TRIP WITH LEANORE 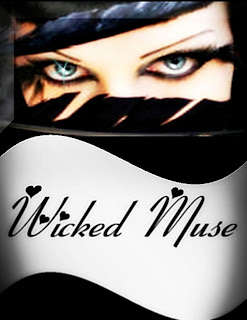 March 22 and 23 this amazing book is yours for free on Amazon!!! 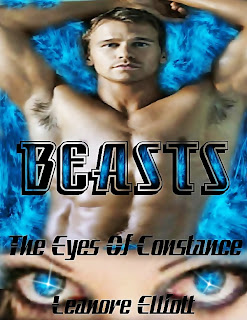 DISCOVER THE BEASTS
These hungry beasts will take you to another world, a world full of beastly pleasures…
EXCERPT:
Breaking the breathless, sensual plundering of her mouth, Jack flipped her around, moving her up against the dresser
'I always wanted him—to want me like this. To look at me, really look at me with passion in his eyes, like he was gonna…'
His head rose and his eyes burned at her.
'Yeah, like that. Just burn a hole right through me—burn one in me!'
Their extraordinary rippling reflections were there in the mirror. Constance panted hard and it was as if a living flame leapt beneath her skin. Jack lifted her hips and bent her over, the mirror above the dresser casting his forceful sensuous movements. He eased two fingers into her and she gasped at the wonderful intrusion.
He watched her face in the mirror while he thrust them in and out. "I want you to see all the ways you will burn for me," he purred at her. With abandon, she spread her legs wider in order to get more, as Jack plunged deeper in side of her. "You will be filled all the way up with me."
Constance stared into his gold flecking eyes and thrust herself down onto his fingers with a greedy delight. A powerful rush of pure flame hit her insides and it felt like she would melt right down to the floor.
Just Click here:  http://tinyurl.com/TEOC-beasts 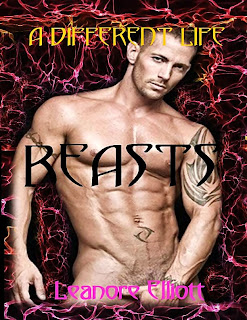 DISCOVER A BEASTLY DESIRE
Alex has forgotten everything—Damon will use any means to make her remember…
EXPLICIT EXCERPT:
"So, you get off on tormenting someone?" she retorted.
"Oh yes, but only you." His eyes burned brightly. “To see your face flushed with passion and need?” He dipped his tongue into her again to emphasize his point and raised his head to look at her. “To make you seep with a warm, wet tide of wanting.”
Alex turned her face away as his words caused another flush to run along her skin. "So, while we were together, you would tie me up and force yourself on me, right?"
His glowing eyes narrowed. "Oh no, you would always beg for it first."
"You're delusional." She let out a bitter laugh.
As though they were just casually conversing, he tweaked her nipples and flicked them with his fingers. "Yes, I suppose I am." He smiled with amusement. “I’ve not had a clear, sane thought since I met you.”
With his caresses, her nipples tingled with pleasure and something lowered from above them. It grew closer, as she stared at the ceiling.
"It's your proof," he answered her silent question.
A full-length mirror, hung suspended on cables and it stopped just above them.
She gaped at the fantastic contraption. "You are definitely a twisted man."
He gave no response as he went on with his sensual seduction of her body. His warm fingers rubbed her labia in circles while his hot mouth latched on to her nipple and he took it into his mouth. He plunged his fingers in and out of her with rhythmic strokes. "You are so wet," he purred at her.
Alex panted and squirmed in her bonds, gasping for air. She closed her eyes and tossed her head back and forth. 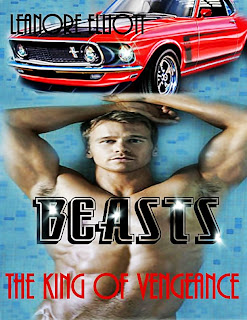 Beasts of Vengeance ~ Hot, Sexy and Suspenseful...
Two cops looking for a beastly killer...and they find a love made of vengeance.
EXPLICIT EXCERPT:
Her wistful-eyed gaze rose over his hard stomach and smooth chest as she released a fluttery breath. Wow, all hard and…built.
He lay her back, lowered those magnificent lips, and kissed her.
Valentine experienced more adrenaline rushes and her body tightened with an unaccustomed need as his warm, silken skin slid along hers. She raised her hands and wove them through his dark hair, tugging his head closer.
Slipping his fingers into her lace panties, he began stroking her. He caressed her with a splendidly sensuous rhythm.
Hot moisture seeped from her with his sliding fingers as her breathing sped up. Her body jerked and quivered with his sensual movements.
Kissing her, he reached under, lifted her up and ripped her panties away.
Valentine knew now what a wildfire truly felt like as her skin burned, while he slid his hard, smooth body along hers.
"This will be the hard part." With one hand, he took her wrists and pinned them to the bed above her head. “Do you want me, Marla Rose?"
Valentine knew she wanted this more than anything—ever. Panting hard, a powerful need surged through her as she nodded her head.
"Open up for me.”
Spreading her thighs wide, the sensual act of offering herself to him caused a sweeping weakness to tremor through her legs…

Oh me oh my! Those covers are enough to make a gal tremble :)