Hello CEWTNK!!  Today I have author Cassandra Carr with me and we are going to delve into her mind and see what makes her tick and how she got started writing!  But first, lets take a look at her books: 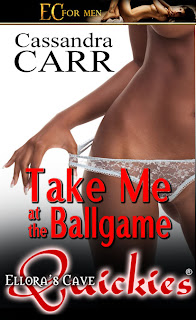 Blurb: Sports writer JT Lovejoy has a chance that’s too good for a middle-aged, divorced guy to pass up—no-strings sex with a hot young intern. Of course, there might never be a bed involved, since they keep meeting in the press box. Not that JT’s complaining. How can he when a beautiful woman offers herself with no commitment? If he’s smart, he won’t. And JT is a smart man. 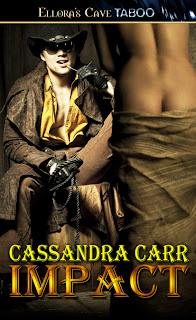 
How old were you when you first realized you wanted to write?
Write in general or write as a living? I’ll answer it as the latter. I was thirty-five. I had already been through the hellishness of Corporate America for fifteen years and after losing my job at a dot com and being unable to find other full-time work I decided to try my hand at writing.
Lol..I definitely meant write for a living.  Most authors have an unusual story or way that they come up with their ideas for books…Do you have one?
I wouldn’t say it’s unusual. But because I’m a pantser, my stories can start with as little as a one-sentence outline. I know there aren’t too many writers who can work off so little.
I think the way authors are inspired for a story is always fascinating.  What was your biggest influence that steered you towards writing?
My mom, who’s also a writer (Cynthia Racette). I was writing fanfic just to blow off steam and she encouraged me to fictionalize my story and submit it to publishers.


Bull-riding is a sport?  ..LOL...soo kidding! Are sex scenes difficult for you to word?
For me, no, but one thing you have to watch out for is repeating pet phrases within one book or from one book to the next. I actually have a two-page document with tons and tons of phrases I’ve come up with and if I use one in the book I’m currently writing I highlight it so I don’t use it again.


Repetition is something to avoid but that is an interesting way to combat it! Do you see yourself writing in another genre?
I’d love to write male/male, but for now I’m sticking to m/f and ménages. They’re working for me!


Romance is romance, no matter how many people are involved!  I think its always a good idea to expand into all parts! Has your family been supportive?
Well, I mentioned that my mother encouraged me to pursue publication. Both of my parents are really proud of me even though they’re not crazy about specifically what I write. My hubs is very supportive, my 3yo daughter not so much. ;-) My mother-in-law watches my daughter two days a week so I can work, but I wouldn’t say she approves of what I do. She’s a Catholic Italian mother who goes to church every day.

LOL…that’s because your taking away mommy and me time with writing J .Are any of your characters reflective of you?

I think a lot of my heroines have something of me in them. And my heroes oftentimes have my sense of humor. I wish I could actually say some of the outrageous things that fly out of their mouths!
What do you like to do when you're not writing?
I read. I think it’s imperative for writers to read. I also watch a lot of hockey and hang out on Twitter (Cassandra_carr).


Definitely from someone else’s work and that is absolutely one of my favorite books!  Yes Elizabeth was way before her time J Do you have any unusual habits that revolve around writing?
Not really. Man, I’m the most boring interview ever…I just kind of sit down and go. I don’t have a ton of time to do rituals or anything considering I only have part-time childcare.

LOL..Unicorn works!! What were some of your biggest challenges at the beginning of your career?
I had success very, very quickly. I sold the second book I’d ever written and the first got strong interest from NY publishers, though it was eventually rejected and is still unpublished. I think I took it for granted that I would be successful and didn’t work on my craft enough.

How do you feel about reader comments?
I love reader comments, even negative ones. I may agree, I may not, but a reader is entitled to their opinion. And hey, writers exist on these little islands inside our heads, all alone. There’s a lot of room for self-doubt, and getting a fan letter can literally make an author’s entire week. So go write to the authors you love!


Do you have any advice for new authors?
Don’t submit the first book until it’s REALLY ready, and after you submit it, write another one. Very few people sell their first book.


Where are your books available?
Everywhere! Actually, it depends on the book because I currently have three different publishers. For all the buy links for my books you can check out http://www.booksbycassandracarr.com/books.htm.
What can we expect from you in the future?
*takes deep breath* Well, I released my sixth book yesterday, Cold As Ice. It’s book 2 in the Buffalo Intimidators hockey ménage series. In April or May the second book in my Buckin’ Bull Riders series, Collision, will release. I’ve got some anthologies and short stories coming up too, but so far no release dates. I’m currently writing book 3 of the bull riders series, and then will be writing the first of a 5-book series aimed at NY publishers. In a few months I’ll be writing book 3 of the Buffalo Intimidators series for a projected release date of late summer/early fall. *gasps for air*


Thank you so much for stopping by Cassandra!!  I look forward to reading your work!!

Great interview. Both books sound awesome, especially Impact. I am not much of a sports fan. Now if you wrote a story in a restaurant or grocery store or bakery- anything food related ;-) Congrats on your 6th book!

Thanks for the great interview! I can't wait to read Impact. It sounds like a really hot read.