Nowhere Arizona: Gateway to the Sun 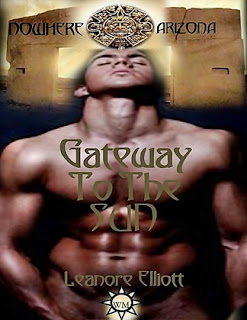 So after reading the first Nowhere Arizona, I was convinced that a sequel was unnecessary and wouldn't compare to the majestic naughtiness of the first.  And as usual, Leanore totally proved me wrong with this smashing second part of the Sun Gods.  We were briefly introduced to Taylor in the first book.  He was a major player in Maddy's old world, in fact you might say it was her if she were a male.  Taylor was a little obsessed with Maddy and continuously stalked her and asked her out.  He disgusted Maddy and she turned down his offers and sneered at his advances.  She could never quite put a finger on it but she loathed him.  In the second book, Taylor comes back to his old live after he regains consciousness inside a room.  He has been in a terrible car accident and has no memory of his life.  And what better way to start over than with the hot woman who is waiting by his bed when he wakes up?

Maddy's story continues as she struggles with recreating a version of herself.  She can never go back to how she was before Dev, but she has to find a middle version of herself in order to be in both worlds.  She loves Dev more than life itself, but how can she live with him and be with him if she never knows if she is going to see him again once he disappears?

Rick had loved Phoebe all of his life.  He was shocked to learn of Maddy's existence and the fact that she was his.  He continuously struggled with the reality that she was dead.  This version of his reality was worse than when she was just unattainable.   At least then he could hold on to a small sliver of hope of maybe bumping into her and being with her once more. The shadow box that Maddy brought to him after Phoebe's passing has him at odds with himself.  Part of him is dying to open it where the other part of him is terrified to.  But once he gets the courage to turn the key, an unexpected surprise lights up the room that will change his life forever.

Leanore has woven these 3 tales together beautifully.  Not only is it a fantastic read, but it also has several amazingly hot sex scenes in it.  Maddy is so lucky and she still remains my favorite character.  Her struggles within this book are so relateable.  How hard is it being in love with a man that disappears and reappears with the sun?  LOL..  I would be frustrated beyond belief!  But if I had Dev to look forward to, or most especially The Brave, I think I would continue to fight!!  His brand of charm and thrill is right up my alley!  So my question is this:  Will there be a return to Nowhere Arizona?  I truly hope so!!!

can't wait to add this to my TBR list!

I have Nowhere Arizona in my cue and really need to move it up. Thank you for your awesome review today and pushing me over the fence about this read :)

Wow that looks really good. Off to amazon to take a look there. :)

Sounds like one hell of a ride. Think I'll check the first book out to figure out what's going on, LOL.