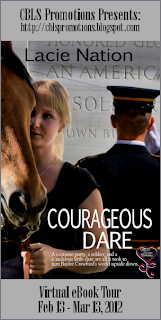 Hello and welcome to this stop on Lacie's tour!!  I was lucky enough to be able to snag a quick interview with her and a sneak peek into her book.  Let's get to know Lacie a little better:


How old were you when you first realized you wanted to write? Probably around 16, I’ve always written as way to deal with certain aspects of my life.

Well that’s interesting..Most authors have an unusual story or way that they come up with their ideas for books…Do you have one? Well, Courageous Dare came to me while I was making dinner one night. I pictured the “dare” and decided to incorporate things that people are going through in our day and age…war.

Lol..I bet you weren’t making mac-n-cheese!!  What was your biggest influence that steered you towards writing?

Because of the fact that it helps so much with dealing with things that I’ve gone through. I’m most often able to write what I want to say better than I can say it.

I have to ask, what are the hardest scenes for you to write? Oh, there is no competition there, I cannot stand to write filler scenes. LOL…I can write the drama and sex scenes all day, but when it comes time to write the filler stuff it sometimes want to toss the computer off the balcony.
LOL…now that is a different answer!!  Are sex scenes difficult for you to word? No, not really. I try to keep it sensual.
Do you see yourself writing in another genre? I’d love to write paranormal I think it would be amazing to create my own world with my own rules.

I love paranormal.  Has your family been supportive? Yes, they support every single word I type and have stood behind me throughout this whole process.
That’s awesome!  Are any of your characters reflective of you? Not so much in this book, but in my first novel the heroine’s life and struggles were very much my own. I did put a lot of little bits and pieces of my family in Courageous Dare though.

What do you like to do when you're not writing? I’m a competitive shooter. My family and I all compete together and it is a blast.
Wow…Now that is an interesting past time J Who is your favorite book heroine? If I’m speaking of my books it would have to be Lilly Banks from So Beautifully Broken because she is so strong, but it’s a hidden kind of strong. If I’m speaking of other peoples books it would have to Helen from Starcrossed. I absolutely love that book.
I have that book but haven’t gotten to read it yet!  It looked awesome.  Do you have any unusual habits that revolve around writing? I have to be alone because the BF has a ‘Lacie’s writing’ radar. I also watch movies that I’ve seen over and over again. I will replay the movie until I finish what I’m working on. I’m pretty sure my blue ray player whimpers every time walk toward it.
LOL..A good movie deserves more than one time!!  What is you favorite mystical creature? Vampires, everything about them is sexy and mysterious.
Yes..definitely sexy!! What were some of your biggest challenges at the beginning of your career? Learning that just because I got published doesn’t mean it’s an instant seller. LOL…it takes a while to get your name out there and create a fan base.
LOL..Leaping a hurdle to come to another one!  How do you feel about reader comments? I love them. I know I can’t please everyone, and sometimes people say things just to be mean, but hearing someone say that my words make a difference to them, or helped them in some way…that’s the reason I work so hard at what I do. I absolutely love reading their thoughts.

Do you have any advice for new authors? Don’t stop. No matter what happens just keep writing your words.
I think that is the best advice!  Where are your books available? You can go to my website www.lacienation.weebly.com and there are links to all my books at all the sites.

What can we expect from you in the future? I’m working on a book called The Weeping Willow Tree. It’s early on, but I’m thrilled with how it’s going so far.

Where can we reach you and become informed of updates? My website www.lacienation.weebly.com
My Blog: www.soulshakinromance.blogspot.com
Twitter: @lacie_nation
Facebook: https://www.facebook.com/AuthorLacieNation
Thanks so much for stopping by today!!  I enjoyed having you!  Now let’s take a look at the book details: 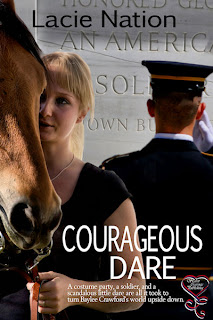 Baylee Crawford thought she had her whole life figured out, right up until she accepts a scandalous little dare involving a mysterious man that makes her throw caution to the wind. When she falls completely in love with her mystery man, how will she cope when she has to say goodbye to him as he leaves for war? When a tragedy threatens to tear her world apart, Baylee is left feeling lost and has no idea how to help her family in the midst of this loss. Follow Baylee and Nash through a tale of love, passion, longing, war, and tragedy.

Teeth hitting, tongues warring, and their breath mingling together, desperate and needy, she couldn’t stop it.
“I need to feel you,” he begged against her lips.
She could have cried from the desperation thick in his voice. Wrapping her legs around his waist and pulling his hips into her, she clung to his body in every way she could. In less than four hours he’d be gone. She molded her body to his, keeping every sliver of skin she could connected to him. Wrapping her arms around his neck, she broke the kiss, and hid her face in the crook of his neck. She breathed him in, sun, mint, and the tiniest hint of cigarette smoke. She always hated the smell of smoke, but on him, mixed with the smell of mint and a scent inherently him, it was mouth watering.
Their bodies moved together as one. Her hands roamed over his back, memorizing every muscle and curve of him. His forehead rested against hers, and she noticed moisture on his cheek, although she didn’t know if it came from her eyes or his.
Baylee pushed on his chest. When he moved back, she moved as well, shifting them, him sitting and her perched in his lap. With her legs around his waist, she writhed against him. She wanted to look into his eyes, fearing if she did, she’d never stop crying. His head rested on her shoulder as she whispered soft words of love in his ear.
When she had an orgasm, it rocked her soul, right down to the very core of her. Her body shook against his. She pulled back slightly, she wanted to see his face when she brought him to bliss. When she looked at him, she couldn’t stop the sob from leaving her. His eyes, bright all the time, shimmered. His chin quivered, but the look of absolute terror there in the depths of his gaze broke her.
“Nash…” She couldn’t say anything else, couldn’t speak past the emotion lodged in her throat.
“Baylee, please tell me you know how much I love you…please.”
She put her hands on both sides of his face, using her left thumb to wipe away the tear slipping from his eye.
“I know, Nash, I know it with everything inside. You love me.”
They still moved together, still worshiped the other’s body until his pace became erratic. When he came, he gripped her hips too tightly. She didn’t give a word of complaint. She held onto him, running her fingers through his hair, trying to hold him together with all the strength she had.
“I love you, baby girl. Don’t ever forget.”
“I love you too.”
Nash carried her to the shower where she washed his body, and he washed hers. She stopped crying, but it took all of her strength to do it. They finished showering, and she went to the kitchen to make breakfast while he finished getting ready. At a sound behind her, she turned and saw him standing there. She gasped and nearly fell down. Standing in the doorway in his combat uniform, her husband, the most amazing thing she had ever seen. She wanted to have her way with him. At the same time, she wanted to hide him away and never let him leave.
Baylee ran across the room and threw herself into his arms, unable to stop the flow of tears from falling. She tried hard to be strong for him, to be as calm as she could, knowing it’d be hard enough for him to leave. She couldn’t stand the thought of him being in a war zone, being in the blistering dessert, being shot at, or anything else along those lines.
“Promise me you will come back. Lie if you have to. Right now, I need you to say the words,” she begged against his neck.
She could feel him choking back his emotion. She could feel his pain radiating off of him in waves.
“I promise,” he whispered into her ear, as if unable to say anymore.
They ate breakfast, neither of them able to say much. Ethan, Jolie, and Jamie went with them on the silent drive to the airport. Once parked, Nash grabbed his duffle bag from the trunk of Jolie’s car, and they all walked inside.
Baylee wanted there to be a line, wanted it to be crowded to give her more time with him. Back to holding it all in, she fought to be strong for him. Her strength ebbed away with ever step they took towards security. Her grip of his hand must have been painful, but she couldn’t loosen it though.
She looked at her watch, seeing he had to go. Looking around, she noticed many of the people watching them, some with smiles and looks of understanding, while others wore looks of appreciation toward Nash. Being proud of him, proud to be his wife, didn’t make it easier to let go of his hand.
When they reached the security gates, she could go no further. The time had come where she would say goodbye to him. Not see him, touch him, or feel him for the next seven months. Baylee stopped, took a deep breath, and turned to face him.
He put his hands on her face looking deep into her eyes and spoke in a soft voice. “I’m coming home to you, baby girl. Seven months, we can do this.”
She nodded, wrapping her arms around his neck. When he hugged her, he stood up straight, lifting her feet from the ground. She wrapped her legs around him, not caring in the least who saw. She kissed his cheeks, both his eyes, and finally his lips, letting her tongue slip into his mouth. The kiss was heated and completely inappropriate for public. She didn’t care.
“I love you, Nash Jenson.”
That just sounds yummy :)  You can check the rest of Lacie's tour our here: http://cblspromotions.blogspot.com/2012/02/vbt-courageous-dare-by-lacie-nation.html.