One Knight in Brooklyn By Casea Major 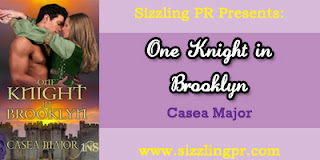 Welcome to the next stop on A Knight in Brooklyn's book tour!  Casea Major is here today to talk to us about our Heros :)  What is a Romance without our idea of a hero?  Take it away Casea!

Perfectly Flawed – Heroes with Issues with Casea Major
Where have all the good men gone?  It seems these days the tortured anti-hero reigns supreme in romance. Alpha Males with a fear of commitment and anger management issues rule the roost.
But what about our White Knight on a noble steed? The perfectly proportioned, honor-bound, duty-driven guy who will sacrifice everything for the woman he loves and the good of his people? Does he still hold a place in our hearts? I say unequivocally YES! But it does seem in recent years the trend for darker heroes has come forth.
And while I believe there is always a place for the KISA. (knight in shining armor) It's much more interesting to have a hero with issues to deal with.
In my erotic time travel, Robert MacKnight is one such man. He's crass, abrasive and a little cocky. But the best part about Robert is he always gets the job done. **grins**
Sometimes in life you have to look past the superficial to see what's on the inside, so when you find a true treasure it's all the more special.
Leave a comment and tell me what flaws you find appealing in your heroes. One Knight in Brooklyn is on tour right now!! To follow it, please check out www.sizzlingpr.com. Let's take a peek at the book details: 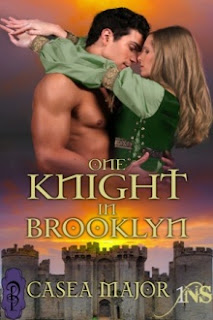 After signing up for a one-night stand through an exclusive matching agency, hopeless romantic Marianne Caldwell is swept away to a medieval land where she hopes to spend the night with a worthy man of honor.
Unsure of how she got from the Castillo Hotel in Las Vegas to a castle in the English countryside, Mare finds Robert, whose stunning physique and winning smile immediately convince her he's the Robin Hood she's been seeking. But despite his efforts in saving her from a corrupt sheriff, his Jersey Shore accent and coarse ways unravel her romantic visions.
With her fairytale fantasies coming unhinged, Mare must decide if Robert is just a crass car salesman from Brooklyn or the chivalrous knight she's looking for.
The following excerpt is rated PG-13. Please keep in mind that the book does contain adult themes and language, and is not suitable for minors. Thank you.
Excerpt One Knight in Brooklyn
“Well, Dallas, what did a pretty gal like you expect from this deal?”
There was no way in hell she would answer that question. So she employed her stellar skills of diversion and subterfuge. “What did a guy like you expect from this deal?” Okay, maybe not the cleverest line she’d ever come up with, but this guy with his mesmerizing eyes messed up her mojo.
He leaned back with his elbow on the mattress and flashed a brilliant smile. She swallowed hard. “To get to know a lovely young woman such as yourself and have a little adventure. You think you can handle that?”
Could he be any more cocky? His thinly veiled innuendo struck her with the delicacy of a baseball bat. No question he was hot. From a purely physical standpoint, he was perfection, but did anything rattle around behind those blue eyes?
She crossed her arms over her chest and tilted her chin. “What I want to know is, can you handle that?”
Oops, she hadn’t meant for that to sound like a challenge or an invitation, but even to her own ears, it did. He stood, his long legs closing the distance between them in two strides. She braced her legs to hold her ground, but retreated toward a wall. So much for holding my ground. Pressing her head back against a branch, she looked up into his even stare. God, his eyes were Ceylon blue, his lips full and lush. He stopped in front of her, but continued to lower his head toward hers. Other than the rustling wind, only her ragged breathing sounded amongst the leaves.
Robert braced his hands on either side of her shoulders, effectively trapping her between him and the tree. Every cell in her body buzzed with electrical current, and her gaze helplessly transfixed on him. The lids of his eyes lowered, and his straight nose brushed against hers.
“Can I kiss you?” His whispered request tickled her skin.
Chills swept over her heated body. Her knees gave way, and she sighed out some inaudible response he apparently took as affirmative. He brushed her lips with a kiss.
With agonizing leisure, his mouth eased over hers, first feathering her closed lips then caressing each one between his. His velvety flesh wisped like flower petals against hers, and the aroma of fresh mint scented his breath. The languid motion of his kiss ignited a desire that throbbed all the way down between her legs. The longer he lingered, the hotter she burned. He never sped his pace or reached for her in any other way. It was only a kiss, yet so much more.
His warm tongue slipped between her lips and slowly explored her mouth, sliding across her teeth and stroking her tongue. A soft moan escaped her and excruciating tension built in her core with each lazy thrust.
She wrapped her arms around his waist and trailed her fingers down his hips as she molded to his body. He gasped and ended the kiss. The staggering length of his arousal pressed into her abs and the burn in her sex flared into a raging inferno.
He rested his forehead against the tree, and she laid her hands on his chest with his body lightly molded to hers. The heat radiating between them smoldered hotter than the Vegas asphalt at high noon. His breaths were steady, but his heart pounded against her open palms.
His voice, deep and husky, sounded near her ear. “Maybe. Maybe not, Dallas.”
She opened her eyes. “Huh?”
He kept his eyes closed and rubbed his cheek against hers. “I was just answering your earlier question.”
BUYLINKS
You can find me at my blog:  http://caseamajor.wordpress.com/ or any of the following places.
FACEBOOK / GOODREADS / THE ROMANCE REVIEWS /
MANIC READERS/ AMAZON PROFILE 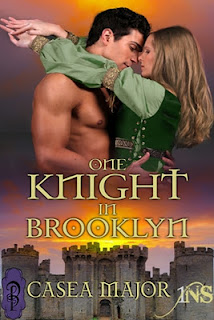 Prior to becoming a writer of romantic fiction, Casea Major worked in the legal field for a non-profit dispute resolution company for ten years.  She is now a full-time mom to three preschool children with whom she and her husband live happily...most of the time.  When she isn't chained to her laptop, she enjoys Cary Grant movies and crocheting.
Website / Facebook / Twitter