Leather and Lace by Leanore Elliot 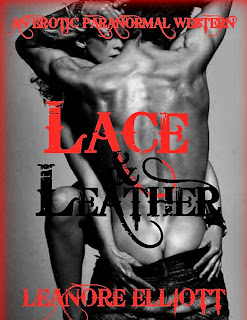 A Hot Ride Through The Wild Frontier…
Jess (Leather) was on a bloody trail to track down his father's savage killers. A woman unlike any he’d ever known before seems to appear out of the blue and captures his attention. But is she his to keep? Will he give her up to have his revenge?
My Review:


Jess had been off riding the plains and taking a break from life on the ranch.  His dad had pushed him to go saying he needed to see the world and find him a good-hearted woman to settle down with.  Jess was headed home and was completely shocked at the devastation he rode into.  He reined in his horse, while his eyes took in what was left of a once beautiful ranch and frantically searched for his father.  He spied a boot poking out of the ashes and all his questions had been answered.  His heart hardened as he set forth on his path to revenge.  He never in a million years thought that on his way to find justice for his father's murder, a treasure would land in his lap that would make him rethink his life.

Lacey was out surveying the plot of the land a buyer had his eye on.  It would be a shame to see another casino pop up and interrupt the wildness of the desert.  This place had remained untouched and unchanged for hundreds of years.  Lacey felt a pang in her chest because she knew that all that was about to end.  Caressing the scope she had in her hand, a recent gift from her dad, she stood wondering what it had been like to have lived back then when cowboys and Indians were more than just stories.  Spying a dust cloud running by, she held up her scope to get a better look.  She was unprepared for the site that greeted her when she looked through.


Quicker than you could snap your fingers, Lacey ends up back in the past staring at a frighteningly beautiful authentic cowboy.  She knew she should be worried but she couldn't seem to focus on anything but how he looked.  And did she really want to?  I wouldn't...lol,,,so I can totally understand her shock!  Leanore does it again!!  She takes a wonderful fantasy ( cowboy) and turns this into a red-hot ride between the past and the present.  Jess softens towards Lacey and is amazed at the amount of emotions that she brings out in him.  Lacey is convinced that she has never lived before she met Jess.  In a short amount of time, both of their lives are turned upside down because of one little antique brass scope.  But can they figure out how to work it in time?  When they are separated, will this time end up being for good?  Let's just say that this book is too sexy for more words!!  It requires reading!!  Hats off to Leanore and her newest paranormal sinsation.  Readers, be prepared for one red-hot ride!!

The book sounds as good as the cover is smoking!!
MJB
msmjb65 AT gmail DOT com

Erotica and a western. Sounds great to me!

Ok I gotta say I wouldn't have thought these genres would go together but this looks too good to be true.