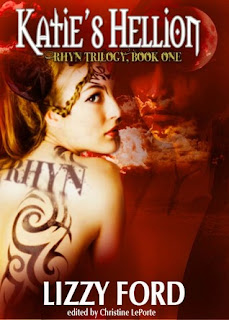 Katie thinks she’s going crazy when a baby immortal and death’s personal assistant appear at her doorstep. She’s drawn into a world filled with immortals like Rhyn, an outcast half-breed who claims her as his mate in a show of defiance to his brothers. Rhyn rescues her from Hell and discovers his little human has the gift of immortal immunity that will help his brothers protect the immortal and mortal worlds.

But Rhyn must keep her alive from good and bad immortals determined to use her and her gift of immortal immunity to their advantage, and Katie must find a way to trust the outcast of the immortal world.

I think that parenting makes your humor shift a bit, because I'm sorry but I died laughing at the beginning of this book.  First Katie gets pulled over by a cop on her way to work at the ungodly hour of around 4:30 am.  She was speeding(37 in a 35) and had a tail light out.  This really tickled me because after the officer was through with her she had a lot of charges and an extremely expensive ticket.  It wasn't funny that she got all of these charges, it was funny because something like this would so happen to me.  I had an instant connection with Katie.  That doesn't happen to often.  So I was still chuckling about the cop when she hops on the train to continue her journey to work.  She had a headache coming on and was pushed out of the way rather rudely by a child around the age of 5 years old that hopped on the train at the next stop.  Since becoming a mother, you realize that children will always embarrass you and that majority of the innocent things they do are annoying or rude to most people.  So as she is about to get off the train, this child (Toby) starts screaming for his Mama.  Katie thinks nothing of it, maybe the child's mother was in front of her, until the little boy latches on to her.  Katie is shocked but wants to help the child and asks him his name.  By this time the child has made such a scene that several people have stopped to watch.  So she asks him about his mother and Toby begins to cry rather loudly.  He was claiming that she was his mother and that she was trying to leave him on the train.  Katie is at a loss.  She knows she has no children and thinks maybe the child has mistaken her for someone that either looks like her or has on the same outfit.  Its logical right?  By this time, several people have made rather rude comments and judgemental remarks, the police officer has gotten involved.  He has asked for both of their ID's and sure enough the names match, as well as the addresses.  Needless to say Katie was on her way very shortly afterwards to the police station.  Now at this point your either going, WTF? or your like me and rolling on the ground.  Talk about the worst case scenario on a Monday morning commute?  So what I have described hasn't gotten us out of the first chapter and I am already completely hooked.

So I loved Katie.  She was a straight talking, no nonsense or drama, snarky, sarcastic, roll with the punches kind of chick. In short? She rocked.  She wasn't a supreme fighter or loaded with supernatural skills, or even drop dead beautiful but more of an outcast. My kind of unlikely heroine.  This book covers a lot of info about both worlds, and the intermediates between, in a very entertaining and completely delightful way.  When your not laughing at the twisted humor, your sitting on the edge of your seat wondering if Katie is ever going to get a break.  LOL..So far...NO.

Lizzy, where have you been?  You have put a completely fresh spin on the immortal realm and I haven't enjoyed a book this much since Larissa Ione's Demonica series. But without the sex :)  I enjoyed it so much in fact that as I was completely engrossed in the second book, I ignored my email until I finished.  I was at my wits ends needing to know what was going to happen to Katie and getting ready to go buy the third book. I had an email from Lizzy wanting to know if I would like a copy of the 3rd book and I literally screamed in excitement!!!!!  This was 5:30 this morning, and I had to get up at 8 to go to work :)!!  This series was well worth the loss of sleep!!!  Lizzy's books are on tour right now and she will be with me tomorrow for a guest post and giveaway!!  Paranormal fans you don't want to miss the opportunity to check out this series.  Lizzy has captured yet another adoring fan in me!!!

I'm HAPPY you laughed! I used to have an awful commute (and still have awful luck!), so this was something that seemed right up my alley, too! LOL Thanks for the awesome review!