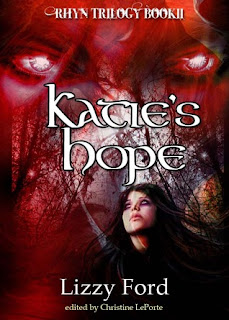 Three weeks after leaving Rhyn, Katie learns the Immortals have no intention of letting her go despite her deal with their leader. Rhyn discovers he can only protect her if he accepts his place among the Immortals. However, doing so may cost him the only thing that matters.

Meanwhile, demons are closing in, and Death orders Katie killed. Death's assassin and the demons pursue them, and Katie will have to choose between Death or Hell to save Rhyn from both.

I didn't talk about Rhyn very much in my first review because I was gushing over Katie:)  But hot, dangerous, and damaged plays a really big part in Katie's life.  The two of them are perfectly paired, even though they have yet to realize it.  Rhyn has lived the better part of his life utterly alone with an amazing amount of power.  He was wrongly accused of betraying his brothers and killing Kris's(one of his brothers) supposed mate and is thrown in hell with Sasha(the brother who aligned himself with the dark one).  Not that Rhyn is totally innocent by all means.  He could have explained to Kris that Lilith(Kris's supposed mate) had given herself over to the Dark One and was seducing all of the brothers and trying to turn them against each other.  But Rhyn needs a little help communicating.  LOL..He isn't very good at this.  Rhyn meets Katie in book 1 while he is trapped in hell.  She actually rescues him by knocking out a robed guard and flinging the guards amulet in his direction.  Rhyn laughs, crushes the other guards, grabs Katie and claims her as is mate.  Oh yeah, Rhyn isn't much on propriety or process but is really big on honor.  So no first date or romantic wooing for Katie.

In book 2 we get to know Rhyn and a few of his brothers a little better.  There were 7 until the oldest was killed.  Sasha is still an traitor and Kris and Rhyn finally come to an uneasy truce.  At least they aren't trying to kill each other.  Toby, the lovely 5 year old angel(literally an angel) that gave Katie so much grief in book 1 has grown on both of them.  As for Gabriel the dark assassin of death, well he still kind of remains a puzzle.  Just as his real relationship with Death does.  There is a lot that goes on in this book.  We have loose ends tied up, questions answered and more formed, and the ending leaves again wondering..WTF is going on?  There wasn't as much humor in this book as the first, but it in no way took away from the story.  It was an amazing roller coaster ride of adventure, even though in this one you get your heart twisted a lot more.  Rhyn is a bit on the wild side but I can definitely see what Katie sees in him. This series is extremely well written and leaves you wanting more!!  Lizzy will be with me today and be giving one lucky commenter a copy of the book.  Trust me guys, you really don't want to miss out on this series!!!

This definitely got my interest and your review makes me even more giddy to read it. I got to get my hands on a copy of this book. XD