Giveaway with T.C. Archer and their stop on the Close Encounters of the Wicked Kind Scavenger Hunt 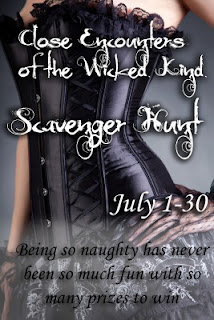 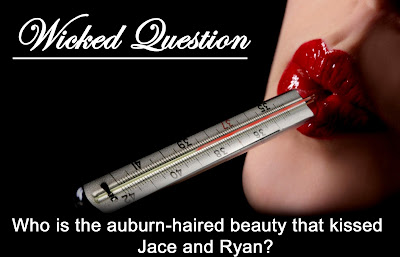 Forged in the fires of hell beauty becomes sin incarnate.

Something malevolent grows in Lorna. When she conjures a dark lord and begs for irresistible beauty, he makes one demand; serve him as an underworld female who tests mortal men. Now, a millennia later, this is her last chance to find a man who can free her. But Lorna must learn to love if she's to save herself. Yet that won't save the two men who shared her body. One of them must be sacrificed.

Lust jolted through Jace as the auburn haired beauty pulled Ryan close. The tingling of anticipation in his balls suddenly had them feeling like they were going to jump out of his scrotum. He told himself to turn away, but he couldn’t tear his eyes from the creamy breasts that spilled over the low neckline of the silky smooth red dress she wore. Was that a hint of nipple peeking over the top of the fabric? She pressed closer to Ryan, and Jace swore he discerned the puckering of a pink edge.

The churning whirlpool that threatened a massive hard on swirled faster. She undulated her nipples against Ryan’s chest. Jace drew in a sharp breath. Ryan pulled her close. She moaned and Jace couldn’t prevent his hand from cupping his cock. He pulsed against his erection as he’d done a thousand times the last three years, only this time, he didn’t close his eyes and envision a faceless female body. He stared at the woman who had flattened her palm against the bulge in Ryan’s jeans. What would it be like to have those long, slim fingers wrapped around his shaft?

Her hand massaged Ryan’s dick and blood pounded through Jace’s ears. He was going to go out of his mind—and would embarrass himself in the process. He yanked his hand from his crotch.

“I-I’m going to wait for my date down in the bar.” He was going to run like hell. Jace turned.

He froze at the sound of Lorna’s voice, low, sultry, and filled with a promise he was sure wasn’t intended for him. A second later, slim fingers grasped his arm and she turned him toward where she now stood in front of the sofa. She reached up and the mid-thigh length hem of her dress pulled even higher as she slid her hands up his chest and around his neck. His mind whirled, but he was unable to resist as she pulled his face toward hers.

She pressed closer, breasts lush against his chest this time. Their mouths met and her small sigh sent a message to his primal brain. He growled. When her nipples hardened against his chest, all thought vanished. Jace crushed her to him. Her feminine curves melted against his hard lines. She flicked her tongue against his mouth and he thrust his tongue past her lips and inside her warmth.

When she pulled back he was breathing hard. Lorna stepped away from him and panic seized him. She didn’t want him. Why would she? A woman like her could have any man she wanted.

“Your date isn’t in the bar.” A slow, sensual smile curved her mouth. “I am your date.”

To be entered to win a copy of this book:
a Rafflecopter giveaway

You can purchase this and all our books at your favorite distributors.

Don't forget the grandprize rafflecopter, and the rest of these great stops!!!
a Rafflecopter giveaway