Saturday Spotlight On: The Replacement by D X Luc 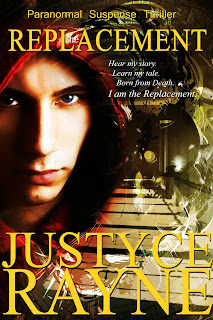 Blurb: ...To save a life, one must be willing to open their eyes to what it truly means to die...
The task of the Replacement is to uphold that very idea. Keep quiet, do your job without any hiccups, and the Council will remain ever you ally.
For Jackson McFlaurey, this should have been simple. A predictable, first time assignment as a rookie Replacement. Unfortunately, he'll learn, even in a world of balance there are no absolutes and betrayal to the powerful Council will have him fighting to survive.
Only...
How can Jackson win such a challenging battle to sustain his humanity when he's already given his soul to Death?

I closed my eyes, savoring his success like it was my own. Honestly, I'm sure it had to be considering my obsession with always being perfect and the fact we connected on a much deeper level. My host had more of me inside him than he'd ever know.

My inner thoughts of bliss were ultimately destroyed by the frantic outcry from the coach.

“Stop, Bradley! This is no time to go renegade player on us. Stick to the play.” He blew onto the whistle. In a flash, my serenity gave way to knowing fear as I looked into the Linebacker‟s eyes. They were wild and flashing with images of Death's scythe. It angered me, seeing that despite his jackass ways, like myself, Bradley was another puppet to the higher powers.

With no time to avoid the inevitable, I braced myself as the larger boy charged my host with clenched teeth and a war cry from the pits of hell.

His body careened into Larry's with the power of a train going through a line of stalled cars. In slow motion, Bradley wrapped his arms around my smaller host while his helmeted head crushed Larry's sternum.

Larry struggled against his opponent, fighting to stay upright. “You won't sack me, man. You've got to try harder than that!”

“Well, if you insist.” Spat out Bradley and he shifted to an angle.

Inside the void room, my world quaked violently and I fell off the bed. My head hit the floor and when I sat up, the walls were spinning. Nausea bubbled up along my esophagus. Whether it was from the mild concussion I surely achieved or the pain Larry suffered, I didn't know. I crawled over to the wall panel covered with the many buttons to access areas of Larry's inner workings. Entering several codes, I pulled up a separate split screen and took note of what the images revealed. The right vision was of my host's muscle and tendon workings throughout his body while the left was the skeleton. I could see clearly his sternum was cracked in numerous locations. My vision blurred and I fought to stand, so I could print the read out for my records when I suddenly found myself lying prone on the tile. “Oh , that's going to leave a mark.” I groaned and turned sluggishly to look back through Larry's eyes.

Another one of Quentin's posse slammed into Larry's side with so much potency, his windpipe pinched from the sharp angle his head tilted in.

The display from my host's view dimmed as lack of oxygen gradually deprived his brain. In a naturally human manner, Larry inhaled gasps to keep his body from succumbing to the weakness spreading through his limbs. His heart pounded, working overtime to maintain blood to his vital organs.

In the back of my mind, I wondered why no one had come to stop the purposefully barbaric attack but knew that it was because mere seconds had passed.
Death always ticked away at eternity's pace.

I wished it could be over for Larry, because of what I thought it would be like before this. I‟d assumed it would be a quick passing. I knew now it was to be a really torturous suffering, and I suffered along with him.

The blue lines coursing through my linked cord paled, as his body's energy drained away and my dizziness increased. Like my host, my breaths came out harsh and shallow, my brain burning as it fought to seek out air. My fingers clawed at the wall beside me and just when I thought there
was no way I could endure more torment, the unthinkable came to pass.

Quentin, the final piece in Death's puzzle jammed his massive frame into Larry's back and swung the already enervated boy to the ground.