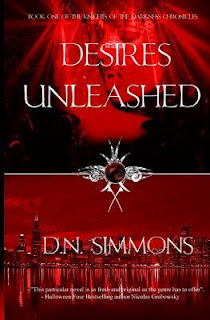 Desires Unleashed is the first novel in the riveting, highly-addictive and sexually-charged Knights of the Darkness Chronicles. Experience the heart-pounding thrill of the chase in this electrifying page-turner as you uncover the mystery behind the series of gruesome killings that have been terrorizing the citizens of Chicago. When a grisly decapitated corpse pops up on a Chicago Street, drained of blood, the highly-trained, government-funded special police force assigned two of their best detectives to the case. S.U.I.T. Detectives Warren Davis and Matthew Eric delve deep into their investigation to discover just who or what is leaving mutilated bodies in public places. They soon realize that the killer or killers is one step ahead of them and if they are going to stop the menace before another innocent human is viciously attack, they are going to need help. Natasha Hemingway liked her life just the way it was... normal and supernatural-free. The vampires and shape-shifters were just where she wanted them to be--far away from her. All was going well until an unfortunate accident landed her in the hospital. It was then that she discovered she had an ability that could help her save countless lives. All of a sudden, she finds herself thrust into the dangerous and alluring world of the supernatural and into the arms of two very sexy and deadly vampires. Original, gritty and sprinkled with just the right amount of humor and wit, the Knights of the Darkness Chronicles will suck you in and take you for a ride you won't forget. You don't want to miss out on this amazing series! This book has been previously published and has been substantially revised from its original release.

Welcome to a new supernatural world, which I must admit I enjoyed immensely.   This is book the first book in the series and introduces you to the main characters and gives you a little back-story and glimpse into their lives.  In this world supernaturals live side-by-side with humans and are policed by their own government division which is refereed to as S.U.I.T.  One of our main characters, Warren, is a detective at this agency and also belongs to the local wolf-pack.  He is mistrusted and considered a traitor to supernatural kind.  But he is more than that.  He believes justice should be served to criminals, and he is there to make sure the government keeps their end of the bargain.  He is caught between a rock and a hard place, but loves his job and his partner.

The chapters are divided up into specifics about one certain group until they begin merging.  You first meet the detectives, which in turn leads you to the wolf pack.  Then you meet our humans, Tasha and Annette,who livin up the story immensely.  Then we have a leopard pack and of course our vampires.  I loved the two party girls.  They embodied the best aspects of two friends trying to make it on their own and having a great time doing it.  But everything changes one night after a really bad accident that lands both of them in the hospital.

Tasha has been taking medication all of her life for headaches, and after the accident learns that the medications served a completely different purpose.  She also meets Annette's boss when he comes to bring her flowers and what begins after that carries you into the rest of the and the connecting of the rest of the groups.

Tasha was probably my favorite character, followed closely by Xavier and Annette.  She started out afraid of the supernatural community, but warmed up to them quickly.  She was a very brave and compassionate woman.

Now we come down to my favorite part:  the heat and boy, did this story pack it!!  Homo-erotic romance and situations (M/M)  are smoking hot in my book and there are several instances throughout the book.  It only makes sense, considering we are dealing with animal packs and ancients.  It was a very good introduction to the characters and I can't wait for another visit into this world!!