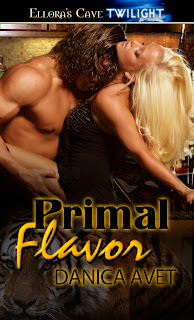 Being a human in a parish filled with shifters, Colette Robicheaux has learned to be tough as nails. A hunter with the kind of lethal skills that make most men nervous, all it takes is a single hot look from Zachary Trahan to make her melt into a puddle of goo. And this tiger shifter doesn’t fight fair, using his hot body and his many skills in the kitchen to melt her panties. But there’s a danger in the swamps that threatens to tear them apart, an evil that could turn this hunter into prey.
When chef Zachary Trahan took a break from work to hunt, the last thing he expected to find was his mate. A human huntress with a hot temper, a quick trigger finger and the kind of body destined to keep him up at night, Colette makes his tiger purr. He’ll have to fight his stubborn mate, her impossible family and the threat hiding in the swamps before he can finally claim her for his own.

Ok I have to admit, when I first started this book I had visions of The Princess and the Frog jumping through my head.  No, not the cute little frogs that got lost in the swamp, but the hunters in the boat.  Yep, I had to put the book down because I was laughing so hard at my own mind.  Seriously?  Even though the book does have a scene of frog hunting in it, these Robicheaux are nothing like those in the Princess story.  It was just the scene set-up that hit my funny-bone wrong.

Colette Robicheaux was hands down my favorite character.  She was smart, tough bad-ass tom-boy that could shoot better than most men and become one with the swamp to the point she would scare the natural predators away!! She knew what she wanted and wasn't afraid to get it...and she knew she wanted that pretty kitty cat.

Ok nothing...I repeat..nothing is sexier to me than a man that can cook.  Sorry!  I always wondered if I would marry a chef, because nothing goes better with over the top yummy food like hot sex.  And of course Danica delivers both!  I'm dying to try that cake..it sounded delicious.  Zach wasn't quite the bad-boy everyone made him out to be.  He was just trying to out-run his past, and make sure no one ever hurt him.  He was the one-night wonder until he met up with Collette, who opened his eyes to all that could be.  She definitely had this tiger by the tail...and didn't even realize it.

The chemistry between these two was amazing, as well as the story.  Danica did a great build-up to the other story that was going on.  It was an amazingly shocking outcome!  This was book 3 in Danica's series but all of the stories can be read separately. Primal Design is still my favorite, even though I love all of them.  Something about those bears that steal your heart!