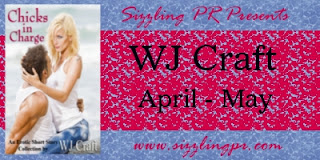 Welcome to this stop on WJ Craft's tour!!  Today, along with you chance to win the book, we will find out the inside scoop on WJ herself.  Let's take a look at the interview:


What made you choose this genre?
- I wanted to share my crazy ideas with the world! Even though I wanted to be a writer a long time ago, it wasn’t until the recent advent of independent publishing that enabled me to do this. I figured no traditional publisher would ever want the kind of stories I do, so I didn’t even try to go that route.
Most authors have an unusual story or way that they come up with their ideas for books…Do you have one?
- I use the 8-ball method. I tip my head and then ideas float up to the top. ;)

What is the key element in your character creation?
- A woman being in charge is key. Even when the “main character” is a man, the focus is on the woman as superior. Misogynists beware! This book contains explicit female-positive content that may upset your sensibilities...
What was your biggest influence that steered you towards writing?

- I’ve read an enormous amount of fantasy and science fiction, and this is an outgrowth of that love.

Are sex scenes difficult for you to word?
- Yes and no. The sensuality of how the parties come together and interact is the easy part. The limited vocabulary when it comes to actions and body parts is what’s difficult. There are only so many words for penis and vagina and orgasm, and if you start using too much slang or trying to be cute about it just to mix things up, it just becomes a distraction.

Do you see yourself writing in another genre?
- I’m working on a horror short story collection, as it happens. Now, when I say horror, I don’t mean blood and body parts everywhere or people being tortured in some lab. A little bit of Chicks in Charge could be considered light horror of the type I enjoy, which is much more creepy and psychological. Things happening to a man’s equipment, someone being imprisoned, alien invasions... these can all be considered horror, it depends on how it’s handled. I divided up my various short story ideas by content. The ones without any erotic content are going in my horror collections.
Has your family been supportive?

- Most of them don’t know! The ones I’ve shown my material to have either looked askance at me, or enjoyed it with a big grin on their faces, or both. I haven’t had anybody tell me I’m going to hell, so I guess I’m doing something right.
Are any of your characters reflective of you?

- To some degree, most of them are, because they’re usually vicarious fantasies. What better way to get inside their heads and make the reader feel like they’re part of the action?
What do you like to do when you're not writing?

- I love gardening with a passion. Getting outside and helping things grow is so satisfying. Flowers, vegetables, fruit trees, bamboo, rosebushes, I love all of it. Where I live there’s lots of different kinds of birds, too. A lot of them come to hang out in my gardens, and that’s a joy as well. I recently put up an owl nestbox, but there’s no visitors there yet.
Who is your favorite book heroine?
- Podkayne of Mars, an assertive young woman in the book of the same title by Heinlein. The book has two different endings, the one Heinlein wanted, and the one the publisher wanted, so if you get this one, be sure it has both endings at the back.

Do you have any unusual habits that revolve around writing?
- I don’t, actually. Not really. I wish I had a more exciting answer. :)
What is your favorite mystical creature?

- Gnomes, because I wonder what’s under those big red hats... I think they have parties out there in the garden at night, getting groovy with Barbies and beer under a big full moon. They’re nice and earthy.
What were some of your biggest challenges at the beginning of your career?

- I’m at the beginning now, and the hardest thing is getting the word out. My friend and colleague, Dragonfly, sells magnitudes more books than I do because people have seen her stuff around for the past 15 years, but hardly anybody knows my name yet. That’s why I’m doing this blog tour!
How do you feel about reader comments?

- I love them and want more of them! Comments, reviews, any kind of interaction is great. I don’t even care if they’re negative, because that tells me what I need to improve on or change. The end goal is pleased readers.
Do you have any advice for new authors?

- Pray a lot! And find a way to get your name out there. People can’t buy your stuff if they don’t know you exist. The other bit of advice would be to write what you love and don’t worry about trends so much, because there’s always readers out there for any kind of literature, from lyrical poetry to tawdry smut.
Where are your books available?

- Chicks in Charge is on Amazon exclusively right now. We’re looking at adding it back in at Smashwords but had some issues over there recently that we’re working on.
What can we expect from you in the future?

I was going to comment in the interview but you would have gotten tired of seeing LOL!!!!! With a sense of humor like that, her book must be a knockout!!  Let's take a look at the book details and sneak a peek inside!!!! 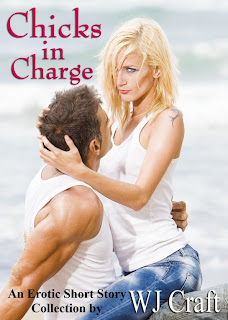 Over 20,000 words of intriguing and playful delights where women come out on top in a variety of ways!

Chainsaw Chicks of Chinese Camp: Are the legends true? Are four amazons lying in wait in this tiny rural town for their perfect boy toys to come along and play with them?

Zap: While researching a possible preventative for epileptic seizures, a scientist stumbles onto a very interesting use for her new app.

Take Me To Your Leader: In this 1940s retro tale, a military translator gets up close and personal with some newly-landed alien emissaries.

The Gnome World Order: Find out what really goes on underneath those seemingly innocent pointed red hats.

Little Shoppe of Enchantments: Augustus Pound takes a wrong turn with some rather questionable results. This version includes the longer alternate ending, not available anywhere else!

Cowboy: They seemed like ordinary women in the greasy spoon in town, but they had plans for Jack Barnes and his equipment.

Rosa Erotica: Lyrical and touching. A 500-word ode to the spirit of the rose goddess and a warrior's epiphany.
Excerpt
The Zap App
The next day, she made a few alterations to her application, reversed
a few things, and then waited for Richard to make his morning
appearance. She didn’t have long to wait.

“Good morning,” he said, right behind her ear.

“Good morning, Richard,” said Veronica, then she tapped the button.

Instantly the sound of coffee splashing all over the floor met her
ears, and she turned to see her nemesis staggering backwards until he
crashed into the cubicle wall, which threatened to topple into the
next space over. His eyes were partly rolled up into his head and he
was moaning and gasping, his twitching body slowly sinking
horizontally onto a filing cabinet. With a grin that was triumphant,
surprised and slightly sadistic, she tapped the button again to see
what would happen when she turned the app off.

A noticeable wet stain at the front of a medium-sized pants tent
caught her attention. Had the poor man wet himself?

“Ohgod,” was all he could manage for at least five minutes as he
recovered. Veronica began to wonder if she should call a medic, and
coworkers started to crowd in her doorway to see what the hell had
happened.

“It’s all right,” she reassured them. “Still working on that epilepsy
app. Must have reversed something.”

“That was... that was...” Richard spit out, trying to regain the gift
of language. “Fucking incredible...”

Confused, Veronica stared at him.

Now that, she hadn’t expected. But something about it sounded vaguely
familiar. She turned her back on her human lab rat as the embarrassed
coworkers made themselves useful elsewhere. A quick search on
“epilepsy” and “orgasm” brought up research on the phenomenon known as
the “orgasmic aura,” a state of spontaneous climax that some epilepsy
victims experienced at the onset of a seizure. She could hear Richard
slowly collecting himself behind her.

“Do it again!” His hand gripped her shoulder and she turned, finding
herself face-to-face with a pair of desperate, lust-filled eyes. His
other hand shot out and gripped her throat. Unable to cry out for
help, she did the only thing she could think of to incapacitate the
madman – she hit the button again.
Doesn't this sound great?  For your chance to win, just fill out the rafflecoppter!!!  Good Luck!!!

Hmm. Thats a hard question. I have a few favorites but at the moment, i cant think of one. Im drawing a blank. :/ Ill have to come back. Thanks!
shadowluvs2read(at)gmail(dot)com

First person to pop into my head was Anita Blake.
I can't wait to read these stories - the excerpt was great!
MJB
msmjb65 AT gmail DOT com