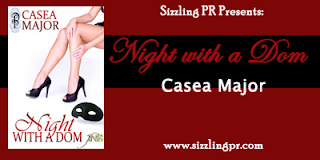 Welcome to this stop on Casea Major's virtual tour of her latest book Night with a Dom.  Looks yummy doesn't it? It is so nice to have her back on my site :)   A think it would be incredibly sexy to let someone else have total control for one night.  LOL..but it would have to be on a try-it-and-see-if-I-like-it basis :)  Casea is going to talk to us a little about heroes.  Take it away Casea!!

What is it about The Hero that captures our imagination?
Guest Blog by Casea Major
Carl Jung and Joseph Campbell say there are nine universal characteristics of a hero's journey.  After their years of study and research, they found in every society's stories, folklore, myths and legends, that The Universal Hero is present.
What is it that causes us as human beings to seek The Hero?
What is it in our make-up that no matter from what culture or country we come, we are compelled toward the The Hero?
The answer is two-fold, two sides of a coin.
We seek The Hero to do what we ourselves can't.  To accomplish something we wouldn't dare.  We revel in putting our trust in him.  An innate need for a savior, causes us to look outside ourselves for someone good who can defeat the enemy and vanquish evil.
But The Hero is also man and experiences life as we do.  He feels sorrow and pain.  We can relate to him and put ourselves in his place.  We can sympathize with him through his trials and understand how he feels and thinks.  And when he struggles and ultimately wins, it is for us.
These two songs illustrate the answers to my question - What is it about The Hero that captures our imagination?
Enjoy!

For more great FREE information about the Hero's Journey you can visit this site http://www.webenglishteacher.com/hero.html.
And now let's take a peek at her book: 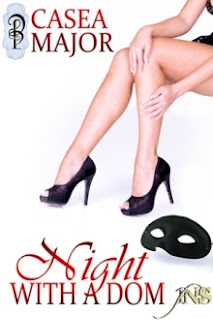 Blurb:
Melody Manning’s workaholic ambition, coupled with a slave-driving former boss, has made her the youngest market analyst in her firm. It’s also killed her personal life, including losing her fiancé. When she receives a message from him on New Year’s Eve announcing his engagement to another woman, Mel loses it. Her new, more compassionate boss has the perfect solution for her—get laid. Good and laid.
At his suggestion, she signs up with the 1Night Stand service, listing her deepest sexual desires on the application.  A speedy response from Madame Eve has Melody on her way to Sonoma Valley wine country and a one-night stand with a mysterious Dom.
The sexy, masked Master promises to get to the bottom of her guilt and provide ultimate satisfaction under the safety of his stern hand. After an emotional night of submission and uninhibited passion, will her lover’s unmasking lead to the end of their encounter or give Mel another chance at love?

Major Love ~~~ Major Romance
Prior to becoming a writer of romantic fiction, Casea Major worked in the legal field for a non-profit dispute resolution company for ten years.  She is now a full-time mom to three preschool children with whom she and her husband live happily...most of the time.  When she isn't chained to her laptop, she enjoys Cary Grant movies and crocheting.
Website / Facebook / Twitter
That was a great post!!  We have moved the giveaway of the book over to the hop:)  So hop on over there for your chance to win a copy!!!

Thanks for having me today Nikki!

Fun post! And it makes you think too. A hero can be many things, but I like mine to be strong sexy men =)
Thanks for sharing the videos, fun songs!

You've hit it on the head, Casea! A hero should be able to pull off larger-than-life events, but should always remain a man who experiences the same insecurities we little people do, lol.