Review: Far From the Usual 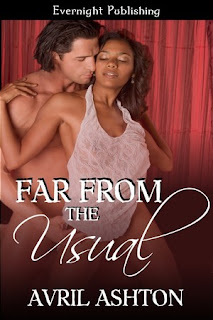 He’s her ex’s brother, yet Arden Windham aches to be in Cam Mercer’s arms. The man is rude and obnoxious, his blue eyes cold and unfeeling, but he makes her body melt. Being with ex-con Cam is nowhere in her plans, not if she wants the affection she’s worked so hard to gain from her overbearing father. Still, Cam’s touch is unlike anything she’s ever felt and Arden finds herself having to choose between her wants and her needs.

Cameron Mercer is his family’s black sheep, a man apart. For six months he watched Arden waste her time with his twin and now she’s free, he’s not waiting another minute. He’s on a campaign to get her off the tight rope she’s been walking. There’s a rebel behind that smooth façade and he’s on a mission to set Arden free. Too bad she insists on putting up a fight.

I love love love bad boys and Cameron Mercer (Cam) fit the bill to a tee!!!  Tattooed, scars, bad attitude, and the total opposite of everything a good girl should want.  Yep...that makes him sex on a stick :)  But Cam has a past, one that helped shape him into the man he is today.  The only consistency is the burning desire he has for Arden.  And now that she is single, he was all about making her his!

Arden felt the heat the first time she had met Clark's fraternal twin brother Cam and steered far away from him.  Even though she couldn't explain it,  there was just something about him that sent shivers up her spine.  Arden was caught completely by surprise at just how deep her feelings could run.

This book was gritty, raw, and down right dirty in some places.  It portrayed sex in an animalistic fashion and it was eye-popping.  And I loved it!!!  The sex scenes were supper hot and Cam was a real life bad-boy.  So of course he was going to be gritty and raw.  This book had a few plot surprises that changes your attitude towards him, and makes you understand why he is the way he is.  But I hope for Arden's sake, he never changes!!  Great read!!