Review and Spotlight: A Measured Risk by Natasha Blackthorne

Hello and Good morning!!  I am so excited because yesterday A Measure Risk was released and I get to tell you all about it!!!  It was by far, (in my opinion) Natasha's best book yet!!  That is saying a lot because I adored Grey's Lady.  But I'll let you decide!!  Here is the book details and a sneak inside the book before I write my review: 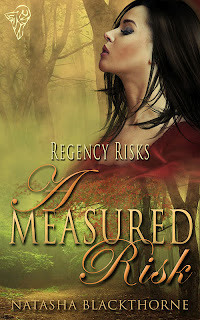 Emotionally scarred in the horrific accident that took her husband’s life, Lady Cranfield is imprisoned by her lingering terror of horses and carriages. Lady Cranfield longed to be closer to the fascinating Earl of Ruel. She sensed intuitively that he could teach her how to overcome the terrors that held her in bondage.
And now she’s willing to risk almost anything-her reputation, even her virtue-to find out. But what he proposes startles her.
When the shy, studious and socially awkward young widow approached him, Ruel instantly sensed she would be the sweetest, most submissive experience of a lifetime-if only he can gain her total and complete trust. He makes her a non-negotiable offer. His help in return for her submission and obedience.
But Lady Cranfield grew up neglected by her ducal parents, raised by servants and then later ignored by her handsome, charming husband. She’s learnt to protect her heart at all costs and she trusts no one but herself.
How can the jaded Earl of Ruel break through her self-protective defences and show her how to love when he has spent his lifetime avoiding that tender trap?
Sneak Peek:


Ruel’s stare pierced into her. There was something predatory and hot in that stare. It came to her, slowly, that he was pursuing her; challenging her.
Yes, her. Anne Bourchier, the Countess of Cranfield. The awkward, somewhat chubby girl who had hidden in the shadows during her season. The woman with the ice-cold embrace that had repulsed her husband, a wholly oversexed gentleman who never turned down a chance to roll in the sheets.
It was unthinkable that man like Ruel could possibly be interested in her.
He knew something about living and being brave. Something she wanted desperately to know.
The highest activity a human being can attain is learning for understanding, because to understand is to be free.
Spinoza’s words echoed in her head. Yes, if she could gain better understanding of what true, natural bravery was, she could grasp hold of it and free herself.
An only child left alone by her parents and always separated from others by her rank and her social awkwardness, she’d found all her answers about life from reading. One could read and study people just like books, surely. If she could speak to him and analyse his responses, she could distil that knowledge into something she could use.
He continued to stare, as if daring her to make the move that would either end the game…or take it to the next step.
A giddy sense of power washed over her. For once, she had something someone else wanted, besides her wealth. She could use it to get closer to him. To observe and learn from him. Should she just give the signal and be done with it?
She knew nothing of such matters. What if she did it wrong, made herself look a fool? Gripping her open fan in her right hand, she lifted it in front of her face.
Follow me.
She intoned the words in her mind with all the power of her intention.
How long should she leave it there? She closed her eyes and silently counted to thirty, each number echoed by her pulse. Then she let her hand drop, her stomach bottoming out.
She’d done it.
Oh God, she’d actually done it.
Gooseflesh rose all over her body and an itchy, twitching sensation raced down her spine to energise her legs and feet. Without daring to check his reaction, she snapped her fan closed and fled the chamber, leaving behind the others and their merrymaking.
Once safely down the corridor, she leaned against the wall, whipped her fan open and fluttered it rapidly in front of her overheated face.
Boot falls echoed in the empty passage way. Her hand froze. One quick glance took in his customary fierce expression.
Oh Lord. Now what?
Her heart pounded into life. She picked up her skirts, flew down the corridor and dashed into the study.
It was empty but for the odour of cigars lingering in the air.
She stared at the doorway, still filled with edgy energy.
What would he say or do once he found she wasn’t playing quite the game he thought she was? But how else to speak to Jonathon Lloyd, the seventh Earl of Ruel, away from the bevy of hangers-on he attracted?
She turned to stare out of the window, watching the wind toss the mighty oak as if it were but a willow.
The door closed softly.
She turned. He was advancing on her. At the sight of him, she caught her breath. His tall body was long-limbed and large-boned, yet in perfect proportion. Masculine elegance. Now, as always, his hair was styled with the appropriate amount of disarray. His clothes were eminently fashionable. Yet she’d never once seen him glance in a mirror or fidget with his cravat or hair, as other gentlemen were wont to do. He didn’t seem to give a damn.
He scanned the room with a sweeping yet comprehensive stare, as if he were still on a battlefield, searching for hidden dangers. Then he narrowed his gaze on her.
Her heart fluttered with little shocks of apprehension. Heavens…to be the object of that stern, intense gaze.

Wan't that just a pure yummy tease?  And this book is full of wonderful little scenes like this....except way HOOOTTTTEEERR!!  LOL!!!

I love erotic historical romances, and Natasha's books meet my needs every time.  Especially her latest book A Measured Risk.  This is by far my favorite book in her collection, even though Grey's Lady comes in a close second.  Anne was on a mission.  Ever since the horrid accident that had taken her husband's life, she had lived in an unrelenting grasp of fear.  But what Anne never realized was that she had been stuffed into a box long before her husband's death.  For lurking inside this studious lady's cold facade was a passionate woman screaming to get out.  And it took one look at The Earl of Ruel to know he was the man that would help free her, she just didn't realize it meant freeing all of her.  Even the parts of her that she hid from herself.

Johnathan was used to getting exactly what he wanted, and he knew from experience that the society ladies rarely offered it.  There maybe a hint of something more behind there cool exterior glances, but it rarely panned out into anything remotely resembling long-term or interesting.  But Anne had his attention long before he came to another one of these dull parties.  She had an air about her that was intriguing and Jon couldn't help being reeled in. Especially when he realized she was more than willing to play his game.

This book is now available at Total E-bound here:

What a hot excerpt! I can't wait to read this book! I wonder what she wanted to ask him. Hmmmmm.

I have loved reading Natasha's books. I haven't read this one yet, but I will be changing that. That was an awesome excerpt!
Mel
bournmelissa at hotmail dot com

I'm rooting for Anne - I hope Ruel can help her out.
Haven't read any of Natasha's books yet - I guess I'll have to work on that.

I do love Natasha's stories! I can't wait to read this one. I will be getting it later this summer!
Mel

I'll have to add Natasha to my TBR list. This is why I love blog hops!

I've added Natasha to my TBR list and my wish list as well can't wait to read.

Awesome read! Can't wait to get the book.
Yvette
yratpatrol@aol.com

I remember reading about this book and wondering if I should read it. Thanks for the review, it helped!

This sounds so good! Definitely one i got to get! :)

Fabulous review! I have had my eye on this one since it came out, so I think I will be moving it up on my TBR. ;)
Thank you for sharing your thoughts.

I have not read any of Natasha's books...yet. Definitely on my TBR list now! Thanks for the great excerpt, can't wait to read more.
MaryLynn

I have not read this one yet but it is on my list. I love Natasha's books.
Yvette
yratpatrol@aol.com

Great excerpt. Definitely adding to my must read list. Thanks so much for the great review and excerpt.

Wow, I haven't read her yet, but I think I need to! Thanks for the excerpt and review, adding to my reading list!

Thanks for the review I can't wait to read this one...it's already been on my to read list but now I want it even more.

Thanks for the great excerpt. I put this on the wishlist. This book sounds fantastic. Can't wait to read it.

Thanks for reviewing this book, it looks fantastic!

Thank you for the amazing excerpt. ON my reading list.

Great review Nikki! I've read A Measured Risk and LOVED IT!!! Had to let you all know out there that it is a great read ;)

Love the tease and your review, =) can´t wait to read it for myself

I will definitely be adding Natasha to my to read list. This book sounds great!

GReat excerpt! I can't wait to read this one. Natasha's books always have a great sense of time and place, plus the sex is hot! :)
MJ
msmjb65 AT gmail DOT com

Sounds like a great read. Thanks for the heads up on a new read!

How fun! Grey's Lady was my favorite too, and I am so looking forward to reading her latest.

I wanna read this!

would love to read this

So want to read this. Nice review, even hotter excerpt.

ty for the chance to win, great review.

"For lurking inside this studious lady's cold facade was a passionate woman screaming to get out".......Sounds like someone I know! xD I so did not just say that on a public feed, however I think a cold shower is in need ;)

Thank you for your review and the damn tease blurb/excerpt, lol!!

I surely wouldn't run away, he could order me about any day.

I have had Natasha's books on my list for awhile I think I need to bump them to the top wow! Was freezing but now I am smoking hot. Excuse me while I go stand in front of the a/c.