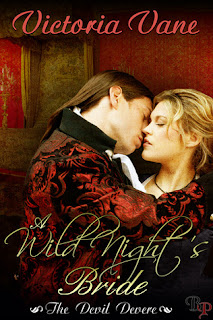 WITH THE DEVIL IN CHARGE...THERE WILL BE HELL TO PAY... What happens when a struggling actress and a grieving widower come together in a night of unbridled debauchery orchestrated by a bored and machinating rake?

She’s a lonely lady down on her luck...
Phoebe Scott, alias Kitty Willis, is a struggling Covent Garden actress with a bruised heart and a closely guarded secret.

He’s steadfast and eminently respectable
Sir Edward Chambers, Ned to his intimates, is guilt-ridden over his beloved wife’s death and avowed to live out a rustic and mundane life … of celibacy.

With the devil in charge — there will surely be hell to pay. Devil in disguise, Viscount Ludovic DeVere, is determined to return his best friend, Ned, to the land of the living.His meddling machinations result in a night of mind blowing passion after which “dull dog Ned” awakes to find himself in the King of England’s bed!

Phoebe was determined to make it as an actress and bury the secrets of her past far behind her.  An opportunity presents itself when the lead actresses suddenly come up missing.  Phoebe knows all the parts by heart and tries to land one of the roles herself.  She manages to convince him that she is perfect for the lead part but is turned away and offered a smaller part.   There is a price to being made into a star and it requires the assistance of a rich provider.  Can Phoebe go through with the steps necessary for her career to sky rocket?

Ned has closed himself off from life after the death of his wife. He concentrates solely on his daughter and her happiness.  But the time has come for Vesta to be introduced into society.   As he journeys to make all the arrangements for the season, he calls on his very best friend,  Ludovic DeVere.  Together, they make all the necessary arrangements and DeVere makes it his  mission to bring his old friend back to life.  The funny thing is, that they opportunity presents itself in the most unlikely of places.

A wager between friends sends the three of them on a merry adventure into the king's private  chamber no less!!  Sparks fly between Ned and Phoebe.  DeVere notices this almost at once and is secretly plotting a victory to his mission.  But can Ned and Phoebe come to terms with their past?  Or are the cards stacked against them.  This was a short sweet adventure and an amazingly entertaining read!!  I found it thoroughly enjoyable and cannot wait to read more on the Devil DeVere!!!

Thank you for the lovely review!
Warmest regards,
Victoria
http://authorvictoriavane.com

Sounds like a great read. The cover is gorgeous.

Great review Nikki! I love those characters that can see what the love birds cant and start to plan. Is this a novella?

Lexi: This is part one in a 4 part series :) Altogether they make a book but its 4 novellas.

This sounds like a great read and I love the title!!