Interview and Spotlight of Forsaken Heart By EliseWhyles 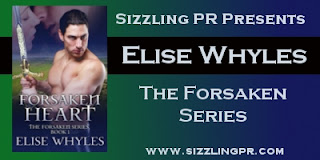 Good morning my decadent darlings!  Welcome to this stop on Elise's book tour!  I was lucky enough to snag an interview with her!  Let's take a peek inside her head and see what's going on!!  Take it away Elise:


How old were you when you first realized you wanted to write? I never thought I didn’t want to write. I just didn’t think I could write professionally until about ten years ago when someone suggested I try my hand at it.
Tell us a little bit about the series. Forsaken is a series about acceptance, about finding love, and justice and looking past old differences. It’s a dark, edgy, erotic romantic journey featuring hot alpha heroes and heroines who are strong enough and tough enough to stand up to the challenge of taming them.
What made you choose this genre? The genre chose the series. I know that sounds weird, but honestly, I think when I came up with the first kernel of the idea I was thinking of creatures most people wouldn’t think about. I wanted it to be unique, and when I brought it up to Ciara we both agreed, Paranormal was the best idea. That way we could have a lot of fun and be as creative as we wanted.
Most authors have an unusual story or way that they come up with their ideas for books…Do you have one? Writing is therapeutic for me. I got the idea for this series while I was sitting in a hotel room, waiting for my SO to be released from the hospital after a heart attack. But that’s not unusual. Sometimes I’ll have a dream or hear something that strikes and idea.
What is the key element in your character creation? They have to be relatable. I want the reader to immediately think “I can relate to this person.”
What was your biggest influence that steered you towards writing? Being a middle child. The younger sibling got more attention than me, the elder sibling got more attention – so being the voracious reader I was, I gravitated toward it. It was a way of escaping the boring humdrum of my everyday life.
I have to ask, what are the hardest scenes for you to write? Love scenes. I always fear I’m being too clinical.
Are sex scenes difficult for you to word? Yes and no. I like to engage the readers sense in each scene and there are only so many ways to say they kissed lol.
Do you see yourself writing in another genre? Oh yeah, I’ve got three books I’m plotting beyond this series that are in the GLBT genre. I don’t write in any genre specifically, I write what the muse and my inner voice tells me to.
Has your family been supportive? To a point. Some days I think my family is a bit hesitant about what I write because its not all behind closed doors, but I have to write what the story needs not what someone thinks is acceptable.
Are any of your characters reflective of you? Yep. Several
What do you like to do when you're not writing?
Horseback riding, reading, crochetting
Who is your favorite book heroine? Oh my, there are far too many to list.
Do you have any unusual habits that revolve around writing? I always have pens and paper on me. And sometimes I’ll stop what I’m doing to jot something down.
What is you favorite mystical creature? You mean I only get to pick one?
What were some of your biggest challenges at the beginning of your career? Learning to market myself and my work. Still not an expert but I’m learning and I’m developing plans.
How do you feel about reader comments? I have a love hate relationship with them. I think they’re vital to growth as an author, but at the same time I’ve seen some that make me think “Did you actually read the book?” because they’re so off base.
Do you have any advice for new authors? Don’t argue with your editor!  Their job is to help you polish your story – arguing with them is pointless and if you fight too hard can mean delays on your book.
Where are your books available? Beachwalk Press, Amazon, ARe,
What can we expect from you in the future? More of the series, some freebies with it, as well as several ‘hero’ themed books, and maybe a SEALs story I’ve been toying with for two years.
Where can we reach you and become informed of updates?  You can pop by my website http://www.elisewhyles.com and sign up for the newsletter, as well you can email me at elisewhyles@gmail.com. I love hearing from fans and try to respond to every single email, FB comment I get.
The Forsaken Series
By Elise Whyles and Ciara Lake
Series Overview:


Among us walk immortal beings – cursed to hide within the shadows they live along side us as they have for centuries. Using, feeding, living off the mortals so reviled for their weakness – yet there are some who will be awakened and immortality will be given.


Now, an ancient evil stirs – rising to threaten not only the Immortal Realms but the mortal world. A cursed vampire General stirs, plotting his revenge on those who have forsaken him…but he’s forgotten about the innocent, who like him have been punished.


There are those who are Forsaken. 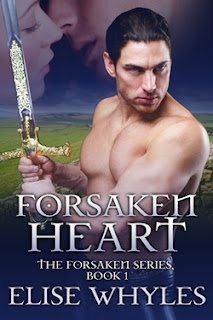 Forsaken Heart
Punished for sins not her own, can a mortal claim her vampire mate?
The world of immortals must unite to save both themselves and the mortals they co-exist with from an ancient evil.
For Bede MacTaggert this means trusting in the warrior sent for her sister—a man of mystery, of power, and one who could easily sweep her into a world she's destined to be part of.
An imperial guard to the king of vampires, Gawain has always tuned out the needs of the flesh. Dedicating himself to the service of the royals, he's lived on the fringes of his people for centuries. Now he's forced from the shadows and into the arms of a woman who will awaken his heart and body to a passion unequaled.
Content Warning: sexy alpha vampire, explicit sex, violence
Sounds awesome!!  Can't wait to read it!!!