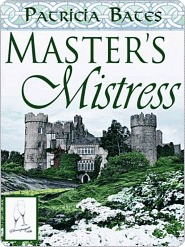 Sibling rivalry, deceit, and seduction flourish in Ancient Ireland as Amoda Ni Cormac struggles to free herself from the shadows of her enslavement. His brother's wedding brings Norse Prince Mykyl back to Bratthl'id Norway, and face to face with the proud Amoda Ni Cormac, a woman destined to be his oldest brother's concubine. Driven by revenge, Mykyl steals the emerald eyed beauty. Bound by duty, secrets, and lies, Mykyl and Amoda are caught in a battle for survival that will ultimately set them free.

Amoda was taken from her home by the treacherous King, who slaughtered her family and forced her into slavery.  She was handed over to his priest so he could prepare her to become his oldest son's concubine. Only this wasn't your ordinary priest.  Amoda was treated cruelly and beaten severely at every opportunity.  She was forced to do repulsive things but was never raped.  No THAT honor would be left up to Prince Olaf.  But the beatings didn't break her spirit or make her more obedient.  Fire ran through her veins along with hatred and the faint hope of retribution.  Her will was solid and even though she obeys her master to an extent, she will never be broken or truly owned.  Until she meets Prince Mykyl.

Mykyl was determined to settle an old score between him and his brother.  Amoda presented the perfect opportunity when she is shown to him on his brother's wedding day.  Mykyl kidnaps her and takes her across the sea to his home.  But he is nothing like his father and brother and will not beat her or force himself on her.  No, he tries another approach, kindness.  With it he hopes to have a willing bed partner.  But Mykyl gets far more than he ever hoped for.

What started out as revenge against past wrongs ends up being more than either party bargained for.  Mykyl is like no man Amonda has ever known.  He is loved by his men and his people and rules his lands with caring and understanding, not cruelty and death like his father and brother.  But there is much to be learned between the two of them and about who Amonda really is.  This book had quite a few twists and turns but was all around an enrapturing story.  It sucked you in as the story begins to unfold and the plot thickens.  Amonda was one of my favorite characters.  She was strong-willed and stubborn but not in a spoiled or self-indulgent way, which made her an interesting character.  This truly was quite an enjoyable read!!

I haven't read anything like this before. It sounds great. Love the cover too.