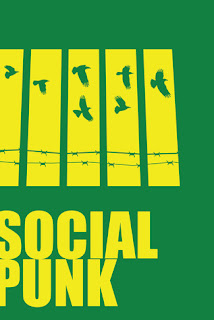 Ima would give anything to escape The Dome and learn what’s beyond its barriers, but the Chicago government has kept all its citizens on lockdown ever since the Scorched Years left most of the world a desert wasteland. When a mysterious group of hooded figures enters the city unexpectedly, Ima uncovers a plot to destroy The Dome and is given the choice between escaping to a new, dangerous city or staying behind and fighting a battle she can never win.

Wow. This was definitely a different type of book with a very unique storyline.  We begin our adventure with  two pretty troubled teens.  Ima as a horribly abusive father and a mother who just blends into the background and ignores everything.  She pretty much tops out on the I have a suck-a** life list...hands down.  Her best and only friend, Dash is her neighbor next door.  She would crawl through the connecting air-conditioning vents to visit with him when her father got to out of control.  Ima has been in love with him all of her life but Dash holds her at arms length and doesn't reciprocate the feelings.  Ima has panic attacks and social anxiety to top off all of this. But everything Ima thought she knew is just about to change.

Sneaking off to a concert with Dash was the most gutsy thing Ima had tried yet.  She made Dash buy her a new outfit so she would fit in and was super excited to get to spend some alone time with him outside of his bedroom.  It was a purely selfish pleasure she hoped to indulge in.  But her father discovers her missing and begins searching for her.  He has managed to ruin everything in her life, why would today be any different?  But through shear luck, Dash and Ima make it to the concert.  On the train Ima happens to bump into a man wearing a hoodie.  He is surrounded by several other men in hoodies.  Ima stands transfixed as she catches his eyes.  The spell is broken by Dash pulling her to the other end of the train.  Who knew in that one moment a split second decision was made to save her life?

Ima's whole life was a lie.  The men in the hoodies were there to destroy her world and one would introduce her to another world beyond her imaginings.  This was a completely fascinating read.  It had the sci-fi geek inside me jumping up and down with joy.  It was extremely hard to put down once I started but very easy to follow.  There are many layers to this story and a few are revealed in the first book.  I would definitely love to continue the series.  This adventure had quite an addicting charm!!