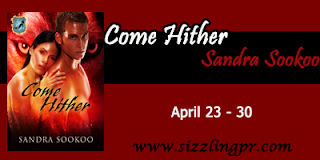 Good Morning and welcome to this stop on Sandra's virtual book!!  It is nice to have an author on my blog that shares my addiction.  Lol..No I am not referring to chocolate or hot sex scenes by simply HEA.  You can torture the characters as much as you like as long as you eventually give them and HEA.  This is what Sandra had to say about it:

Thanks for allowing me to visit your blog today!
Thanks for coming on Sandra!! :)


Hi, I’m Sandra Sookoo, and I have an addiction to happily ever afters.
That’s what draws me to writing and reading romance, knowing that after all the drama and trials the hero and heroine will have to overcome, I know there’s always going to be a happy ending.  Is it always traditional?  Not by a long shot, especially in some of my own work, but sometimes happy endings don’t always end with walking into the sunset or everyone watching shooting stars.
But I still cling to a deep love of fairy tales—although not the overly sweet ones.
When Liquid Silver Books announced their Silver Slippers call for reworked fairy tales, I was in the seventh heaven of delight.  Can you imagine?  My very own chance to put a stamp on the fairy tale world?  To have the opportunity to shake up beloved tales in my own way?  I couldn’t wait to get started.  When Liquid Silver Books announced their Silver Slipper call for reworked fairy tales, my brain went into overdrive thinking about what I could do with that.  I was in heaven.  I’d already had two reimagined fairy tales (WISHFUL THINKING which came out last December and FRACTURED which came out in February) but I needed more.
But wait…  I wanted a different spin on things.  I didn’t want the same old blah, blah, blah.  So I plotted and planned for COME HITHER, my take on the Little Red Riding Hood tale.  I thought that by making my heroine, Riley, the wolf, and if I made the hero, Carson, a beta-type guy, that would be even better.  Oh, the hurdles my hero and heroine would need to overcome.  Oh, the agony of defeat when my heroine ended up being an over-the-top bad-ass, unused to having a man want to help her out or even adore her for just being…her.
Riley’s a wolf shifter who’s broken away from her overbearing, alpha-laden pack.  She took her grandma and ran after they wanted to leave the old woman alone out in the woods.  She’s got trust issues too, but that’s okay.  It gives her great reason to hook up with Carson…and maybe she’ll even have to rescue him before the night’s out.  I jokingly refer to this story as a trouser ripper. LOL
If you like your fairy tales and raw and dirty, with a bit of humor thrown in, this story is for you
You can almost hear the wicked laughter in the background, huh?  I had the greatest fun writing COME HITHER.  I hope you’ll pick up a copy of this story plus look up my other ones!
Let's take a look at the book in question: 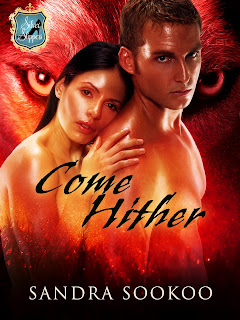 Heroes don’t wear capes and heroines sometimes have fur.  This ain’t your grandma’s fairytale.
Riley Hanson has fate by the balls.  She’s a kick-ass wolf-shifter who’s not afraid to tell people off, especially if they try to suggest how to live her life.  She lives with her grandma in the Wisconsin woods, hoping to keep the worst of humanity away.
Carson Hoode, the guy every woman wants to talk to but not date, drives a truck for Red Riders Express. Six months off a divorce, the only thing he’s got going for him is a perfect delivery record, except a heavy October downpour and a muddy road threaten it.  As he tries to finish his route on foot, he slips and wrenches his knee. The business end of Riley’s rifle closes out his day.
The fur and pheromones fly as Riley and Carson battle their attraction while eluding a back woods hunter intent on bagging more than local wildlife.  They’ll need a healthy dose of fairytale magic to survive—too bad there’s no such thing.  Now, if only Grandma would give them some privacy because someone’s getting laid at the end.
Sandra is a writer of romantic fiction.  Her portfolio includes historical, contemporary, sci-fi and paranormal romances in full-length books as well as shorts and novellas.  No matter if the heat level is scorching or sweet, she loves to blend genres and often times will add humor as well.
When not immersed in creating new worlds and interesting characters, Sandra likes to read, bake and travel.  Her favorite place to spend vacation hours is Walt Disney World.  It’s where dreams come true and the soul can play.  When she’s not writing, she’s keeping things interesting at the Believing is Seeing blog or spending time with her husband.
You can write to Sandra at sandrasookoo@yahoo.com, visit her website or look her up on Facebook and Twitter.
Excerpt:
"Thanks for nothing, assholes." Riley Hanson slammed the phone receiver back in its cradle on the wall. She pressed her fingers over her eyes and took a few deep, calming breaths before her rising temper got the better of her. Those bastards. Once again the idiots in town refused to accept delivery of her grandmother's insulin, which meant the delivery service would have to send a driver into the remote woods of the hills where she lived.
In the rain.
On a night where the full hunter's moon would make an appearance and cause her to go furry.
"Damn it all to hell and back. Next time I see those guys, I'm going to beat them to a pulp with a pool stick." She couldn't help the words that slipped out; hadn't known she'd spoken them out loud until she heard the soft, wheezing laugh from her grandmother in the room next door. "What?" She popped around the wall that divided the kitchen and living area and gave the older lady a mock glare while planting her hands on her hips.
"Don't give me that, child, I'm much older and have seen much worse." Grandma Hanson chuckled again, laying her knitting in her lap. "The jerks in town never sign for my packages. I don't know why you let yourself get upset this time."
Riley sighed. Of course her grandma was right. She relaxed, collapsing on the sofa next to her relative. She rested her head against the fleshy shoulder she'd drawn comfort from since childhood. "I know, but I didn't have a chance to go to town and fetch it after work. I hate when the delivery people have to trek all the way out here, especially when the weather is so nasty."
"Especially when you're ready for the monthly shift." Grandma Hanson lifted a shaking hand and petted Riley's long, black hair. "That is the real reason for your angst."
"Yes." As if she could forget the one, major thing that set her apart from everyone else in the village. "I hate shifting in the rain." She shivered, imagining how the damp would permeate down into her thick fur coat, chilling her to the bone. It would take an hour in the Jacuzzi tub to thaw out.
"You can't help the weather or your natural instinct." Her grandmother shrugged. The gesture caused the air to fill with her rosewater scent. "Make the best of it. During my shifting years, there were many times I didn't want to deal with the transformations, but there wasn't a damn thing I could do about it."
"You're right." Once menopause kicked in, a woman's shifting urge declined every month along with her estrogen levels until she didn't transform anymore. "I just wish it didn't hurt so much." Right now, that event seemed so far off. The cold always made shifting worse.
Her grandma's next laugh made the older lady's double chin quiver. "The legends say that if a wolf-shifter finds their true-of-heart mate, their touch can make transforming bearable."
Riley snorted. She'd heard that story too many times to count. "Right, and as dorky as that sounds, I also don't believe that if some guy holds my hand, I won't feel the shift. Old wives' tales probably."
"Doubting will get you into trouble one day, maybe faster than your smart mouth."

HAH!!  I love the this isn't your grandma's fairytale!!  That rocks!!!  Sandra is giving a 20 amazon card to one lucky commenter at the end of the tour.  So make sure you stop by them all and say hi!!!

Thanks for hosting me today :-)

Wow What A Book Cant Wait To Read It. butterfli262002@yahoo.com

LOVE the twist to this tale!

Sounds like it's spicy & humorous. Nice combination! Linking shifting to the monthly period? Sounds like a double curse =)

COME HITHER looks amazing. I will be enjoying the tour.

Lucky, Riley. she has one more reason to appreciate menopause.

I'm curious about Carson and why women just want to talk and not date him.

Love twists on fairytales and the cover is hot.

I love HEAs and I love fairy tale themed books. I've never read a trouser ripper, but I am definitely intrigued.

This sounds REALLY good! I am adding it to my TBR right now. Love it! :)