Hello and welcome to this stop on Mary's book tour!!  Happy Easter and I am happy that you decided to stop by and check out my review!!  But first,  let's take a look at the book details: 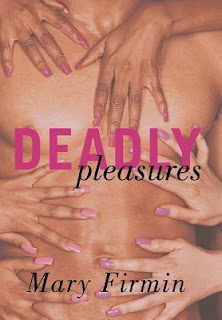 Megan Riley has bigger things to worry about than the fact that her neighbor has just been found dead.

Her engagement has just ended, and she is once again on a quest to find Mr. Right-or at least Mr. Right Now. Tired of emotional ties and ready for a new adventure, Megan and her three best friends make a fateful decision. They hire hunky stripper Michael Harrington as their timeshare boytoy-unaware he is the prime suspect in a series of gruesome murders. Suddenly, they find themselves involved in a complicated murder investigation led by a handsome detective who is focused only on finding the twisted serial killer before he strikes again. But who will be the next to die? Megan, the hardworking real estate agent; newly divorced Kathleen; Alex, married to a wealthy businessman; or Rachel, the spurned wife of a hot Hollywood screenwriter?

Following her own investigation, Megan takes a wild ride through L.A.'s bondage parlors, hidden sex clubs, and the extravagant lifestyles of the rich and famous; soon she discovers that her quest for adventure has abruptly transformed into a dangerous game of life and death.

Well you know the saying hell hath no fury like a woman scorned?  Well try 4 of those with lots of money.  They could do some serious damage.  Instead they come up with a plan to have a little fun with a stripper.  I like the way it was phrased, timeshare boy-toy, because they do indeed take turns with this young hunk.  Until the bomb is dropped and they find out her is the leading suspect in a string of murders investigation.  But is it really that cut and dry?  Did you ever know a good book that was?

The book in itself was catchy, and kept you drawn in on what was going on.  The characters, while I think they may have been accurately portrayed, kind of get on your nerves.  They have more money than actual common sense.  But that adds to the story.  Especially when the hunky detective struts in.  I really enjoyed the book and recommend it for anyone who is really into the more unusual murder/mystery books.  Because this novel takes you into some weird places!!!  I would love to read the second book that is due out!

Thanks for posting today, I am glad you like the book!

Dear Nikki, Thank you so much for the wonderful review of my book. You certainly GOT the idea of the Deadly Pleasures. And, Nikki, I appreciate all the time you took to read and review my book.
All the best, Mary Firmin

I think it's worth noting that the author of Deadly Pleasures, Mary Firman, is going to rather disgusting lengths to promote this book. She followed me on Twitter, read a blog I wrote about my aunt dying two days earlier, then had the balls to send me a tweet stating
"@TobinElliott God Bless Aunt Hannah. I think she’d have loved my book Deadly Pleasures See reviews..." and gave her site. She tried to hock a book at me based on the death of a loved one. This is the class of this woman. But don't believe me, check out @FirmanMary for yourself.