Giveaway and Review of Cemetery Street by John Zunski 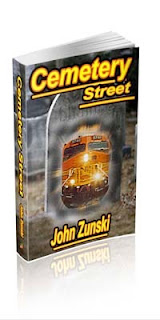 In a world where dreams are possible and nightmares come true, can you romance a memory? James Morrison thinks so. In a snowy cemetery, James reenacts a childhood ritual, unleashing an avalanche of memories. Laugh, cry, and blush with James as he recounts a late twentieth century American life.

I've recently come across quite a few authors that have just an undefined category as to where you need to stick them.  Labels seem so harsh at times.  This book was unique in many factors.  It was told from a man's perspective, as he was visiting the grave of his lost love.  It seems that James was caught in a turmoil of drama ever since the day his parents decided to move to Cemetery Street.  Only somethings are just not meant to be, no matter how much your heart longs for them.  Love is unique to each person, and therefore each person's story is different.  No two loves are ever the same, and they never happen in the same way.  We grow and change.  But this story being told is of Jame's life from 12 to almost 30.  He had a very interesting ride to find himself, and it finally happened in Montana of all places!

The book begins with James visiting Shannie's grave.  Shannie was his best friend from 12 until the day she died.  James fell in love with her somewhere along the way but Shannie would never be his.  Even though fighting between Jame's parents was continuous, he had a happy childhood with his 2 best friends.  Count decided after graduating that his future belonged to the army.  Count was Jame's other best friend.  Shannie wanted to be a lawyer, and James really didn't have a direction he wanted to go to.  He floundered a bit, never really being swayed by either parent who seemed to always be stuck in some sort of battle.  And then of course you mix in some small town weirdness, old rumors, a blind man, Shannie's mother and you have a recipe for a really good read.

Jame's goes through a lot during this story.  He deals with loss constantly throughout is whole story.  Whether it be a person, a feeling, or a situation.  His struggles during his life turn him into an interesting adult. It almost seems at some points in the book that he obsesses over what he knows he cannot have.  I would say its a mixture of Stand by Me and Forrest Gump.  Bits and pieces of both of the movies stuck in my head as I read through the pages.  This was a tear-jerker in a few parts but a book that definitely keeps your attention.  It makes you re-evaluate and think about your own life.  Can it possibly compare?  What would you have done differently?  I really enjoyed going through Jame's memories but I would have liked to have peered into Shannie's diary a bit more.  But all in all it was an excellent read!!

To celebrate the release of the great book going into print, we are giving away 2 e-book copies!!! So how can you get your own copy?  Just fill out the rafflecopter!!!

I have this one on my e-reader TBR and I look forward to reading it. Thanks for your warning to have tissue handy. (-;

Thanks for the review!

Do you have any advice for aspiring writers?

Thank you so much for the book! It looks really interesting.
Lauren