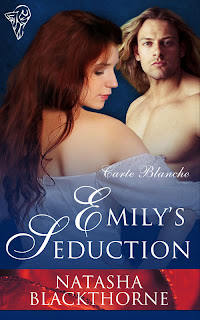 This is book 2 in Emily and Alex's sensuous discovery of their love.  Even though the first book hinted at  a naughtily ever after, Emily and Alex have a long way to go and many things to explore before they can finally settle down.  Alex is finally happy and as a result, tries to shield Emily of  the horrors of the world in order to preserve his current state.  He truly believes that Emily can never accept him or love him if she discovers his past.  But Alex has been holding back in the bedroom and is hesitant to express his darker desires.  Will Emily accept this part of him or turn from him in disgust?

Emily knows Alex is holding back from her.  She knows there is more to his past then he lets on.  The scars from his past haunt him and in turn barricade her from truly knowing him.   Then comes the repression of her spirit.  He refuses to allow Emily to work on her new project.  He claims that she should be satisfied with the work in her past and let someone else pick champion this new cause.  Emily rebels.  No man will dictate her.  If Alex can't understand her, how can he love her?

Back and forth the battle of wills goes with both ending up losing so much.  Alex seeks to show her pieces of his carnal needs by including and third person in the bedroom.  He starts heating things up in a bedroom that already sizzles and discoveries Emily's passion rivals his own.  But will he taint her innocence by showing her the darker side of love?  Will Emily turn from him in disgust as all the pieces of his life are spelled out for her?  Alex's fears are potently portrayed in this book, along with the unfolding of his horrific past, and his carnal urges.  The decadence displayed in this book leaves you panting for more!  The sensuous scenes are just my kind of naughty.  It is unusual to say this but the sequel surpasses the first book  not only in sexual hotness, but in content as well.  What a stunning and wildly exciting ride.  Ladies, please have your fans handy before jumping into this one!

Can't wait to add this one to the list of summer reading.

I have read her books before and they are awesome! This is going in my TBR pile

Sound like what I'm doing right now. Falling first then finding out about him.

I just love the cover of this book.
Yvette
yratpatrol@aol.com

This sounds intriguing, definitely need to check this series out. Plus, I love when I share a name with a character :)

I also love Natasha Blackthorne and this one is on my TBR list.
mcv111 at hotmail dot com

Story sounds like a great read. New author/book which I have added to my book wish list.

Im intrigued and ready to read more! Love your books!

This sounds like a very sexy read. Thank you for sharing your thoughts on it, Nikki! :)
Another one to add to my pile.