The Prophecy of the Flames

Good Morning CEWTNK!  I have just finished reading the first of this remarkable series and can't wait to tell you about it!!  Let's take a look at the details: 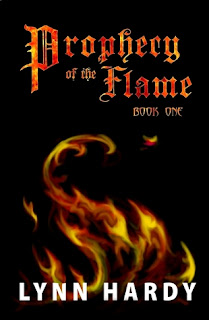 In a blinding flash of light, five nondescript strangers are yanked from this world and thrust into a land of sorcery. Transformed into the characters they were pretending to be; Archmage Reba, Jamison the healer, Jerik the dwarf, Charles the prince charming, and Allinon the druid elf blend twentieth century technology with the supernatural powers of this new world.

This band of wannabe heroes soon discovers that having the powers you have always dreamed of, does not make life a dream come true. The Crusaders of the Light struggle to form a cohesive band as they fight to liberate the kingdom of Cuthburan from the evil horde threatening humanity.

For those who believe the struggle of love adds a greater depth to any story, the romantic thread in Book One is explored in greater depth in this version.

Battle is also waged within Reba, an ordinary housewife who has become the most powerful mage on the planet, as she struggles to remain true to her wedding vows. Drawn against her will to the arms of Prince Alexandros, Reba must choose between the prophesied marriage to a handsome prince in a magical world or returning to the husband she left behind.

Imagine if you will, your husband buying you a vacation at a role playing themed hotel.  It sounds awesome right?  LOL...if you are into role playing.  It's hard to explain to your love that playing video games and actual live role playing are two different things.  But the thought was sweet and there was always next weekend to sleep in.  So off they went to enjoy.  Rebecca was almost late for role call and was introduced to her team mates.  They were split into groups of five, with no time to spend getting to know each other because, yep you guessed it, Rebecca's group was up first.  So as they prepare for a mock battle with tin foil swords, the game master announces that no magic can be used.  Well that's just peachy.  Rebecca's character was a mage.  She had spent all of time writing spells instead of developing her character.  So as they are engaging a group of gremlins in their first mock battle, something strange occurs.  Rebecca is blinded by a bright light and suddenly winds up inside of her character...literally.  As she looks around, she realizes that all of her teammates have become their characters, and wherever they were, it wasn't where they were a few minutes ago.
So you take a bunch of earthlings, give them unimaginable powers, and drop them in a medieval version of earth and you get the makings of a completely amazing adventure.  I loved it!!  Rebecca or Reba, as she is called in the other dimension is by far my favorite character.  She is strong-willed and mouthy and quite good with rhymes.  She also has a good heart and loves children.  This particular dimension that they had been summoned to was under attack by a fierce demon hoard.  It was revealed to their mage that these five would bring about the turning point in the war.  Not to sure, which turning point, but a turning point none the less.  So you travel through this foreign land with our group of really unlikely heroes, as they bumble their way through their new found powers.  This book was one I couldn't put down.  The descriptions are so realistic, you can actually picture yourself immersed in the colors and scenery.  The writing flowed and the storyline kept you completely sucked in until it was over and then the disappointment spit you out.  I will be getting the next book because I have to know what happens!!  Great series!!  It has my highest rating!!

This book was provided to me by Lightning Book Promotions (http://lightningbookpromotions.com) Here is where the author can be found https://www.facebook.com/ProphecyOfTheFlame?sk=app_138507036234062 and all  the proceeds of this novel goes to help Lynn's Homeless Shelter called Agape Assistance http://agapeassistance.org/
This book is going to be made into a movie!  This is super exciting because it was such a good book!!!

Nikki, thanks for being a part of this tour. I am so glad you liked it. :)

Thanks for the post. This book sounds awesome! I'm off to add it to the wishlist!