Sneak Peek and Review of The Lure of Shapinsay 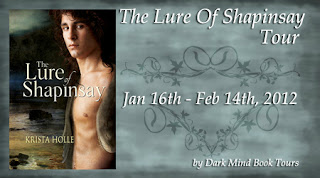 LOL..This was supposed to post together but evidently blogger had other ideas about how it should post.  Just remember there is a giveaway going on with an e-copy of this book and a T-shirt.  Just click here: http://closeencounterswiththenightkind.blogspot.com/2012/01/giveaway-and-guestpost-of-lure-of.html
Here's a little sneak peek:

A hand slid over my mouth and stifled my scream before I was even fully awake.  When my eyes sprung open, I was ready to be filled with the image of a most ghastly villain, but instead it was forewarned magick that filled my eyes, and I was filled with awe.  A man in the lightest sense of the word, loomed over me with eyes so wide and feral, I thought he might howl to the moon.  His words came out rough and breathy.  “If you make a sound, I’ll snap your scrawny neck.” 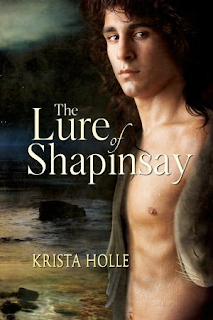 
Escaping into a different time is always a pleasure.  Another world void of the technology that clutters our day to day life's and the endless string of wireless devices that we can't live without.  A world that involves walking, knowing who your neighbors are, and most importantly magick.  Magical creatures were once alive and a big part of of everyone's day to day life.  Such is the case in Shapinsay.  Kait is a young girl with a little bit of a rebellious streak and a whole bunch of wild hairs.  Most of the villagers are afraid of the water, but Kait feels its calling like its a second home.  She feels more alive when she's in the water, more so than she has ever felt on land.  Even though Kait is considered quite outspoken, she has a good heart.  Her only true friend in the village goes into labor at the beginining of the story, but the child is not wholly human.  The webbed feet and dark eyes are a dead giveaway that the child was part selkie.  The mother is restrained as the child is thrown into the ocean.  Kait jumps in to save the child, angered that the people in her village are so heartless.  Unbeknownest to Kait, she has sealed her fate as a murder in the eyes of a young selkie male.   Her scent has filled him and he is going on a hunt for the young woman he thinks killed one of his own.

Eamon is on the hunt.  He has no care for the land dwellers.  He life and love is the ocean. But the senseless death of one of the half-breed young fills him with rage.  He is driven with the need for revenge.  But once he comes face to face with the supposed killer, can he really follow through with the act?  I really enjoyed this little novel.  It has quirky characters, kind of like mixing the mind set of women today in a past setting.  The woman known as the village witch was by far my favorite character, even though her story was a little sad.  I liked the way the author gave the selkies a good mix between the human and animal traits.  I also loved the mythology behind how the came to be.  I'm a sucker for past stories!  I will be looking for more from this author.  For this being her first in series, she has the potential to expand into something great :)

This looks like great read and something I would like...great review