After reading Grey's Lady I was eagerly anticipating Natasha's sequel to this Naughtily Ever After.  You know a book usually ends after the couple gets married and has a baby and you just put the couple on the shelf marked happily ever after.  Not so in their case.  They had way too many skeletons that needed to come out of the closet, on both sides.  In their case they needed each other to make them whole, to heal the past scars that haunted them.  But finding each other wasn't enough and the author knew their story was just beginning.  And now I give you the eagerly anticipated squel, White Lace and Promises. 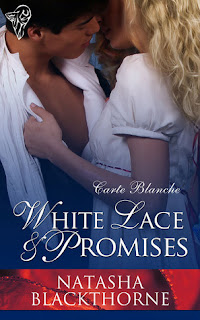 Shocked and hurt by Grey's distance, Beth wonders whether he truly returns the burning love she feels for him. Beth demands that Grey prove he can truly change once and for all or else she will not start a family with him. But will the dark, sensual secrets she yet keeps repel this arrogant, self-controlled gentleman she has married?

For those of you that have read Grey's Lady, the sequel begins pretty much where this book ends.  Beth cannot believe that Grey has really asked her to marry him.  She is now engaged to the merchant prince of New York, but real life has an ugly way of getting in the middle of someones naughtily ever after.  Her half-brother and sister keep coming to Beth with their money problems and expecting her to fork over the money.  The woman who had raised Beth since her mother died is filling her head with the rules and expectations of Grey's world and Beth's first love has come back to haunt her and her new found love.  Top this off with some vicious gossip about her husband to be;s first marriage and some ugly familial truths that come to light from Beth's past, and you have the recipe for a very rocky start.

Grey is battling internally with his preconceived ideas about how his life and his marriage should mingle.  He is obsessed with thoughts of Beth, so much that he is missing meetings and allowing work to pile up, even when he is at work.  He is a man that lives by a very controlled means and knows no other way to be.  After the failure of his first marriage and his fear of ending up in a marriage similar to his parent's he has sworn off the thoughts of kids and settling down.  But Beth was different.  He had to have her, to posses her, to own her.  She was like a burning need, quite comparable to breathing and eating. But he had to treat her with caution, just in case she decides to run from him...again.

White Lace and Promises will take you on a roller coaster ride of erotic sexual encounters, lies, deception, and near misses, on its journey towards it's naughtily ever after. Here both of the characters are stripped down to the bare essence of why they turned out the way they did.  Grey has to compromise and realize that his way is not the only way.  Beth has to learn to trust in him.  But both are strong-willed and stubborn and after all the secrets are revealed and the dust has settled, can they move forward?  I really enjoyed reading this story.  I fell in love with Grey in the last book and all over again in this one.  Still at the end of this dripping conclusion, I would love to be Grey's Lady!  Natasha has pumped out an excellent sequel!!  I can't wait for her next book!!

Your comment about real life getting in the way is so true.

I love books where you see what happens after the HEA. The ones that show that you need to work for what you want.