Review of Realm of Fire by Leanore Elliot 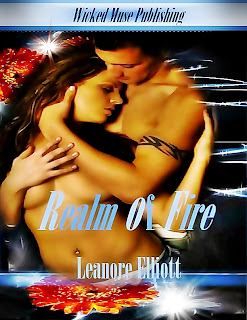 Blurb:
The meanest, grittiest work on Earth, fighting a demon with a roaring power to burn away land, animals and human flesh from the bone.

Belle was doing what she'd dreamed of, for her whole life. She was a Hotshot, part of the most elite force in the world of firefighters. All her dreams about fighting fire had come true. And that's when the nightmares began.

Dreams of that all-encompassing fire which reappeared again and again.... Burned charcoal-like remnants of what used to be living things lie scattered in an endless, gruesome array. She searched through the gloom and there was no trace of anything alive, while the death of scorched earth, trees and brush spread out before her vision. "Belle!" The voice shouted in her ear as she sat upright. She peered down to find her uniform and all of her fire gear burned away from her body.

It was the voice of Saxon, one of the crew members. He was always there while she fought fires and while she fought the nightmares. Was it premonition? Or was she cracking up? Maybe it was all manipulated by him and he was after her, but why?

Nothing is as it seems in the Realm—The Realm of Fire.

Review:
Belle was your average balls to the walls adrenaline junkie, that just so happen to also have a love and fascination with fire.  So it came as no surprise that when she grew up, she joined the most elite firefighting team where women are unheard of.  But being the only woman didn't bother her.  This was what she signed up for....or was it?  Belle has one true friend on her team and one man that completely rubs her the wrong way.  But was the rubbing friction, fire or a little of both?

Saxon had been searching for her for a long time and finally found her.  He knew she had always been drawn to fire but never actually believed that she would be fighting it.  He tries unsuccessfully to talk to her, but she keeps blowing him off.  If he can't get close to her, how can he make her remember who  he is?

There is no secret that I am a huge fan of Leanore Elliot's.  Her steamy novels have left me hot and bothered wishing for that particular hero to be prevalent in my life.  This book is no exception.  Saxon has been in love with Belle all of his life, even though she keeps running from him.  In this instance, the gap was a little too long and she has forgotten about him.  This doesn't deter him.  He would go through hell and back again just to have her.  He has proven it countless times. But this Realm is determined to hold her.  Will he finally triumph in his quest for her heart?  I loved Saxon :)  He was my favorite character.  Although the story doesn't have many of Leanore's melting sex scenes, it in no way takes away from her story.  This one has an adult fairytale ring to it that I found utterly enchanting!!  The concept behind this story was beautifully woven and  thoroughly enjoyable, as well as the characters!  I can't wait until the next addition!!

Oooh I want to read more about this Saxon! I love that he has been searching for her and is working to get her to remember him and love him! Great review!

I was going to start my post in exactly the same way as Lexi! Ooooh, I want to read more!
MJB
msmjb65 AT gmail DOT com