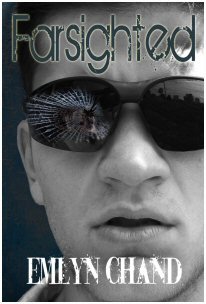 Alex Kosmitoras’s life has never been easy. The only other student who will talk to him is the school bully, his parents are dead-broke and insanely overprotective, and to complicate matters even more, he's blind. Just when he thinks he'll never have a shot at a normal life, a new girl from India moves into town. Simmi is smart, nice, and actually wants to be friends with Alex. Plus she smells like an Almond Joy bar. Yes, sophomore year might not be so bad after all.

Unfortunately, Alex is in store for another new arrival—an unexpected and often embarrassing ability to “see” the future. Try as he may, Alex is unable to ignore his visions, especially when they begin to suggest that Simmi is in danger. With the help of the mysterious psychic next door and new friends who come bearing gifts of their own, Alex must embark on a journey to change his future

Alex was a typical kinda normal teenager.  Except for the fact that he was blind.  This didn't seem to deter him though.  He still went to school and walked and talked like a normal teenager.  He is, in fact, my favorite character.  He is moody, sad, and a self-imposed loner, with no friends.  The only person outside of his parents that talks to him is the school bully.  Your heart literally bleeds for him during most of the first part of the book.  Then things start happening.  A young girl moves in to their town from India and is very interested in Alex.  Alex found it absolutely amazing!  He had high hopes of finally making a friend, and maybe, just maybe, a little more than a friend.  But things start happening to him.  He starts becoming lost in his visions and has a hard time separating them from real time.  This is his book.  It follows him on the long road of acceptance and friendship.
I thought that this book was very well written  and it kept me sucked in til the end.  It is filled with lovable memorable characters and it leaves you wanting more.  This is definitely one of those YA books that will soon be skyrocketing to the top.  I can't wait until the next installment of the series.  If you were ever a fan of the series HEROS, then this book is for you! I throughly enjoyed it!!

Yay! Thanks so much for the review, Nikki. I'm thrilled to hear you enjoyed it and especially that you loved the characters. I've heard the hero connection several times now but have never seen the show. I think I'll have to make a Netflix run and get schooled :-P Don't forget you can get an ARC of the next in series, Open Heart, by signing up for my mailing list.

Thank you for the kindly support and enthusiasm,

I very, nearly signed up for the Farsighted blog tour... I am regretting my decision not to now - it sounds wonderful!

I'm your newest follower by the way :) I hope you'll hop over and follow me back!!
Pen to Paper