Falling In Between By: Devon Ashley

Welcome to CEWTNK!  I am part of Devon Ashley's Blog Tour.  I will have her on again next month interviewing one of the characters in her book.  Today I am going to post my review on her work.  Let's take a look at the book details: 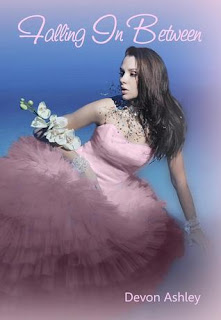 Finally! A private conversation. And all I had to do was throw myself off a cliff, drown in a pond in my undies and let him put his hands on my breasts to bring me back to life. Yay me! (yeah, that’s sarcasm)

Yep, that pretty much sums up the most craptastic night of Jenna Baker’s life. She drowns after jumping off a cliff, meets a hotty named Chance in the pearlescent in-between and is brought back to life by her soon-to-be boyfriend Robert.

Just when things start to move forward with Robert, the guy she'd been crushing on for a year now, in walks the man of her dreams – literally. Chance suddenly appears in her dream every time she closes her eyes. So it's Robert by day and Chance by night. One in the real world and one in the dream world. What could possibly go wrong?

Absolutely nothing – until she comes face to face with the guy she met in the in-between, and realizes her romantic rendezvous with Chance may be more than just her imagination.
My Review
This was the first book I have read by Devon, so I wasn't sure what to expect.  But I must say I am extremely happy that I signed up for her tour!!  Our story begins with two teenage girls sneaking around trying to get into some mischief.  Pretty normal for around that age:). Jenna had been avoiding jumping off of the cliff into the pond.  Yes, she had seen her roommate successfully jump several times, but it didn't make it any easier for her to do it.  She had taken the walk of shame, rather than jump, a few times before.  She had convinced herself that if she could make this jump, then she ultimately could finally dredge up the nerve to talk to Robert.  Scary thing was the jump off the cliff was looking like a breeze in comparison.  So she jumps, and almost drowns.  This is why I always walked away from dares because that would have sooo happened to me.  Luckily, her crush just happened to not only be on the swimteam, but also close by when her roommate starting screaming for help.  So Robert, her crush, has now become her personal hero.  But something happens to Jenna before Robert finds her and brings her back to life.  She finds herself in a rainbow void where she bumps into another person.  And just before CPR brings her back from the dead, a connection between them sparks to life
Jenna is a loner, not necessarily by choice, but she has learned not to get close to anyone.  Her roommate being the only exception.  They were instant friends upon meeting and Jenna found it impossible not to let her in.  After she wakes up in the hospital, she is surprised to see that her roommate isn't the only one who has been visiting.  Robert had consistently stayed with her as well.  As bad as she knew she looked, she was incredibly happy that her crush finally noticed her.  Who knew a near-death experience would finally land her a date?  But after she comes off of her medication, she starts dreaming of another guy, the same one she met in the void.  And that's when her life really becomes interesting.
Jenna has been unable to emotionally connect with anyone most of her life.  So when Chance suddenly appears every night in her dreams, she feels as if its ok to be free with him because, well, he is just a dream.  Through her experiences with Chance, she forms an emotional bond with him.  One that is shocking hard to break.  She truly is living two completely different lives, one by day, and the other in her dreams.  In reality, its hard to say who actually saved who in this book.  While Robert saved Jenna from dying, I think Chance helped Jenna actual live.  Before the accident Jenna was so focused on her grades that she wasn't enjoying anything going on around her.  Chance helped her see that it was ok to let people in.  So was Chance real or just her dream guy?   That you'll have to find out for yourself!!  This book was an excellent read and had very lovable and relateable characters in it.  I was enchanted with this book and enjoyed it immensely.  I will defiantly be keeping an eye out for Devon's future works!!!

Devon is also giving away a doodlegraph during this tour and a few stops along the way are hosting giveaways.  Click here to enter and take a look at the tour schedule :
http://devonashleywrites.blogspot.com/p/falling-in-between-blog-tour-giveaway.html

Don't know what a doodlegraph is, but the book looks excellent!
MJB
msmjb65 AT gmail DOT com