Review: His Princess By: Kiru Taye 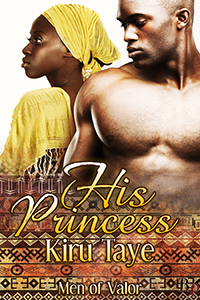 With the weight of a kingdom on his shoulders and his honor at stake, can a Prince truly love a slave?

Ezinne is dismayed when her mistress presents her to Prince Emeka as a concubine to cater for his every need for a few weeks. She’s a slave whose previous encounters with men make her fear their brutality.

Yet the more she gets to know the powerful yet honorable prince, the easier he breaks down the walls around her heart. She soon comes to want him more than she wants anything else, even freedom.

But Emeka is the heir to the throne and Ezinne is a woman with secrets that threaten not just their budding relationship but a kingdom.
My Review:
This story takes you back in time to ancient Nigeria, and you can picture it so easily because this book is filled with such vivid descriptions. But the story itself is heart wrenching and beautiful at the same time.
Emeka longs to help his father bring peace to his kingdom that has seen so much war.  So he marries the Princess Nonye to begin the long process that will eventually bring together the warring cities.  It was not a love match, but he was one who lead by example and would be faithful to his soon to be queen.  But Emeka is fascinated by his new wife's handmaiden.  She has captured his attention like no other before her.  When his wife journeys back home for a celebration, she comes to him with a proposition.  She offers Ezinne to him as a companion while she is away, giving him the opportunity that he secretly longs for. But is he willing to plunge his kingdom back into war because of one forbidden woman he can't seem to stay away from?
Ezinne was born to serve and even though she longed for more, she was forced to except her plot in life.   Ezinne carries many dark secrets around with her and continues to hide from her past and her present in the shadows.  When Princess Nonye confronts Ezinne with her plans to offer her as her husbands companion in her absence, Ezinne is outraged, especially when she discovers the real reason the Princess wants to stay in her father's kingdom longer. Even though Ezinne is excited about the concept of Emeka touching her, she realizes no good can come of this little set up.  But as her heart is called away from her on its quest to be united to its mate, will Ezinne follow or comply to her mistress's wishes to leave?

This was an absolutely enchanting love story with some incredible twists.  During his wife's absence Ezemal only longs to be near Ezinne and looks forward to the few hours they spend together at night conversing over dinner.  Ezinne feels the same.  But what will happen when the Princess returns?  How can they go back to their roles and act like nothing happened?  I absolutely recommend this book to all romance lovers.  It may break your heart in some places, but read on.  The enchantment must be seen through to the end to be felt!  Excellent Read!!