Review: The Keeper by Natalie Star 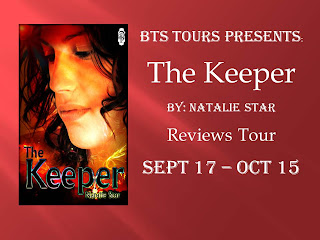 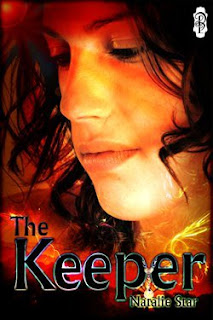 The morning of her sixteenth birthday, Billie feels blessed despite the reoccurring nightmare that wakes her. Loving parents, a caring boyfriend, and great friends surround her until an heirloom necklace throws her into a world she never imagined.

“Gifted” with supernatural powers and an unexpected destiny as the Keeper, Billie and a mysterious boy from her past must work together to find answers. But, as they begin to discover feelings for one another, he disappears leaving her to fight evil alone. Her life spirals out of control. She breaks up with her boyfriend, Tony, and alienates her best friends Arianna and Jocelyn to protect them from the truth.

As dark forces pursue her, Billie longs to run away from it all, yet a need to do what’s right compels her to face the future as the keeper of more than her own fortune.
My Review:
This was quite an incredible read!!  I have reservations lately on YA books because they have been rather dry, but this one was amazing!!  Billie, the main character, was quite a unique character with a quick temper and a tell it like it is attitude.  She had a pretty cool and easy life until her 16th birthday hit.  She was given a necklace that had been in her family for years, and with this necklace changes began to take place.  Her eyes were slowly opening to a world she previously knew nothing about, and as a consequence, her whole life changes.  The boy she had dated all through high school didn't appeal to her that way anymore.  Her two best friends were slowly becoming distant from her life and new players entered the game.  Her life slowly spirals out of her control.
At first, Billie was OK with it.  So she was now friends with the school freak and steadily becoming closer to her brother.  It was really interesting to watch her transformation.  She went from a mouthy stuck-up girl to something entirely different. The two people she disliked most in school turn out to be her biggest allies and helpers. Throughout all this, she ends up falling in love.
Billie was a really relatable character and the story was fast-paced, page turning, and quite frankly unique.  My only regret was that I had not discovered this author sooner, because she has talent in bucket loads.  This was in no way a typical YA and I enjoyed every second of it!!  Excellent Read!!!

Nikki, thanks so much for participating in my review tour through BTS! I am glad you enjoyed The Keeper. Your review was so exciting, it made me want to read my own book!

There will be more to follow in the next book called The Organizer ;) No release date as of yet.

And if anyone reading this will be attending NY comic con on Friday, I would love to see you.
http://nycc12.mapyourshow.com/5_0/sessions/sessiondetails.cfm?ScheduledSessionID=1DABCC