Spotlight On: Demons and Lullabies By: Kallysten 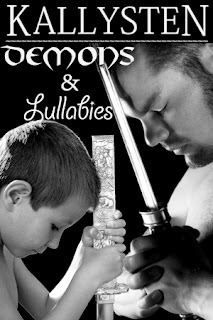 Some little boys want to be firemen or astronauts when they grow up. From the moment Jacob understood what his fathers did, he never wanted to do anything but fight demons.

Andrew, Jacob’s father and a vampire, fights demons because it’s a necessity: few others have the strength or skill to kill the strange creatures that started appearing the very night his son was born. He carries with him some guilt, too, and the suspicion that the magic that made Jacob’s very life possible also opened the way for the demons. The last thing he wants is for his son to ever join this fight and get hurt.

As the years pass, however, and Andrew watches Jacob grow up and grow more determined, he slowly has to accept there’s little he can do to deter his son. It doesn’t help that Nicholas, Jacob’s other dad and Andrew’s Childe, starts giving Jacob sword-fighting lessons under the cover of playing, or that Jacob discovers his mother’s diaries and comes to the same conclusion Andrew did concerning his origins and the demons’.

Through snapshots covering Jacob’s life from birth to adulthood, watch all three members of this unusual family change, grow up, and find their place in the world.

He looked around again, and this time caught sight of a glimmer on the other side of the stream, moonlight reflecting on metal. His heart in his throat, Jacob started circling the thick tree that blocked his view, remaining at some distance so he would see before being seen.
He recognized the weapon first: Nicholas’ sword. Two more steps and he could see Nicholas, sitting on the ground with his back to the tree, holding the sword in front of him with both his hands as though defending. Jacob only needed one more second to know what he was defending. Across his lap, the unmoving body could only be—
“Dad!”
The word bubbled out of Jacob too fast for him to stop it. He started rushing toward his dads, all caution forgotten, but Nicholas’ voice rose and reminded him of his training.
“Careful! There’s one more,” he said quickly, his head whipping toward Jacob before he started staring ahead again. “It’s wounded but I don’t know how badly. Do you have your phone? Call Craig and—”
“He’s hurt, remember?” Jacob finished, scoffing lightly. “I’m here, Dad. I can do it.”
He had reached the tree against which Nicholas sat and stood next to it, his gaze going back and forth between his fathers at his feet and the demon growling a few yards away. It had no weapon and it wavered slightly, its stance unsteady. It seemed to hesitate between attacking with its bare hands or going to the side where a third demon lay, an ax still clutched in its dead fist.
“Jacob,” Nicholas said urgently. “You’re not ready. This isn’t a game or training anymore. I don’t want you to—”
“I don’t want you to get hurt any more than you already are,” Jacob said, and bit back the question of how hurt they were exactly.
There was blood on both of Nicholas’ legs where his pants were in tatters, so dark it seemed black, and blood matted Andrew’s hair, too. His eyes were closed, and Jacob had to remind himself that of course there was no heartbeat for him to hear—no heartbeat but his own and the demon’s, that was. And the demon had finally made up its mind and was skittering toward the ax.
Jacob firmed his hold on the hilt of his sword and stepped forward, ignoring Nicholas’ words of caution. He could do this. He had been training for years for this. And besides, the demon was already wounded.
It would have been fair to let the demon get a weapon before he attacked, and for a second or two, Jacob considered it. If he had been alone, he might have let it arm itself, even if that raised the level of danger. But with Nicholas watching him, Jacob knew how much of a bad idea it would have been to show any mercy. Nicholas had always supported him when Jacob said he wanted to fight, but that support could easily be revoked if Jacob took too many risks.
Being wounded, the demon moved slowly. Jacob reached the corpse of its dead companion before it did. Beheading was the best way to kill a demon, his fathers had taught him, but the demon towered almost three feet above him, and its neck was out of reach for now. It was no matter; Jacob swung his sword low, cutting the demon’s thighs a little above where it was already wounded, and a lot more deeply.
It was the first time Jacob had sliced through living flesh. The feeling of resistance was unexpected, as was the vibration in his sword when he scraped bone, but he pushed through, and stumbled back when the howling demon started falling forward as its legs gave out beneath it.
Crouching down on the leaf-strewn ground, it pressed its massive hands to the earth and raised its head, growling menacingly. Jacob’s heart stuttered, but he felt no fear as he raised his sword again, high above his shoulder, then let it fall directly on the demon’s neck.
Blood splattered everywhere on impact. The demon was dead in seconds. Jacob raised a hand to his face to wipe off the blood that had reached his cheek. His hand was trembling when he looked at it. The demon’s blood was warm, and black as ink in the night.
“Jacob.”
The sound of his name startled him and he raised his head again. Still against the tree, Nicholas was looking at him, his smile strained by pain.
“You did good, kiddo.”