Giveaway and Guest Post with Jaye Frances and her book The Cruise: All that Glitters

Thank you, Nikki, for having me back on Close Encounters With the Night Kind with my  adult parody, The Cruise – All That Glitters. Written from the male point of view, The Cruise is a twisting satire about Dean, a cocky, self-assured mid-thirties bachelor—and a real piece of work—who is hoping to find romance, or his version of it, on board a cruise ship.
I’ve often wondered if it was as easy as it looks. How are men able to suppress logic and rational thought—the kind that builds empires and creates fortunes—when distracted by the flash and sparkle of a beautiful woman? This curious phenomenon materializes seemingly without warning, especially in night clubs, bars, shopping malls, restaurants, and . . . well, let’s face it, just about anywhere.
Evidence of this primal state is often characterized by subtle changes in the subject’s appearance and demeanor—a dazed expression, an impish grin, and a tendency to mindlessly ramble about the trivial and superficial. I have to admit I’ve always been fascinated by the source and design of the specific triggering mechanism that results in the male brain-freeze. So I decided to write The Cruise from the perspective of Dean, imagining what it would be like to evaluate the world of women through the eyes of a groin-on-fire, pheromone-sniffing, hormonally-charged male, stalking a jungle full of female flesh in search of his next conquest. (Excuse me for a moment. My mind must still be in male gender mode—I swear I just felt my pants get a little tighter.)
In the following excerpt, Dean is relaxing in one of the ship’s hot tubs when he’s unexpectedly joined by Marcie, an attractive gal who has an obvious interest in him. He tangles with his emotions, struggling with his conscience and commitment to his new-found love, Angel, and yet, insists on keeping the door of flirtation slightly ajar.

I kept fighting the unmistakable chemistry between us, telling myself I needed to behave, as if Angel were sitting right here with us, watching me, testing me.
“I probably won’t make it to dinner tonight,” I said halfheartedly, feeling strangely aggravated at that part of me that wanted to flirt back.
“How come? I could move nearer to where you’re sitting, and that way we could talk across the table, or at least send some hand signals.”
“I’d really like to, but I’ll probably pick up something from the buffet and take it back to my cabin.”
She nodded. “That sounds pretty good.”
I said nothing, trying to conceal the sudden awkwardness with a few swats at imaginary insects.
She tried again. “I really don’t feel like dressing up for dinner, either. Would you like some company?”
We were both suddenly tense, waiting for my answer. Before I could think of something to say, she playfully mocked my continued silence. “What’s the matter? I’m not good enough for you?”
“No, of course not. It’s just that I have—”
“It’s okay,” she interrupted. “I didn’t mean to push myself on you.”
“What about your friend?” I asked. “The dark-haired girl. Won’t she miss you at dinner?”
“She’s not feeling well. I think she got too much sun. She’ll probably spend the rest of the night in the cabin.”
And then I blurted it out. “Well, maybe we could meet tomorrow for breakfast. Or lunch.”
“I’d like that.” She was glowing.
What’s the matter with me? In less than two hours, Angel and I will be inseparable, like two lovers on holiday. I can’t make a date with another girl. Sure, this Marcie is pretty and sexy. And she’s got a great body, but Angel has . . . everything.
I took a deep breath. Slowly, reluctantly, I said, “I’m sorry. We probably shouldn’t plan anything. You see, I met someone and—”
“Oh.” She stopped me before I could finish. Unable to hide the sudden flash of disappointment on her face, she forced a smile and added, “Working on a shipboard romance?”
“Maybe. We just met yesterday.”
She nodded. “Remember, I don’t ask twice.”
We sat for several minutes, she poking at the bubbles and me watching her, both of us occasionally allowing a quick glance to grow into a longer, engaging stare, usually ending with a burst of laughter. Once, she stuck her tongue out at me in a kind of comic reprimand. And while I understood the meaning, I found myself wondering how she would taste.
I liked her. There was a welcome sense of acceptance in being with her, in simply talking to her.
And it frustrated me.
The possibility of actually meeting two girls—two interesting and sexy girls—was no longer the fortunate happenstance I thought it would be. And now I was being forced to choose, even though I already knew what my decision had to be.
Marcie brought her hand up from the water and dusted the foam away from her chest. “They’re small, but I like ’em.”
I could sense a stupid grin beginning to grow on my face. I waited, wanting to make sure we were talking about the same thing.
“I had them done about a year ago. I wanted more uniformity, and a little more size.”
She quickly glanced behind her, as if wanting to confirm we were still alone before rising out of the water and exposing both breasts.
“They’re really nice,” I said, trying to sound as objectively appreciative as possible.
And they were. Incredibly nice.
“Sure I can’t change your mind?” She smiled seductively, and then began to laugh as she lowered herself into the water. “I’m sorry. No more teasing, I promise. If you’ve met someone, I understand.”
She was open and uninhibited—not only about her body, but in her unabashed and honest confession of wanting to spend time together. And more important, she was funny and bright, possessing that rare kind of personality that could make the transition from friends to lovers a possible, even natural transformation.
I wanted to reach out and slide her onto my lap. I thought about her small bottom, hidden under the water.
Angel . . . I should be thinking about Angel. She’s probably thinking about me . . . about us being together. I should be ashamed.
But I wasn’t.
Here’s a brief synopsis: 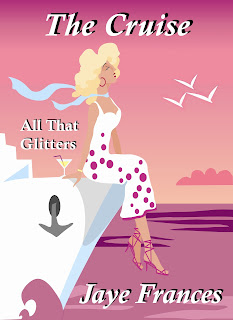 It’s love on the high seas for Dean, a thirty-something bachelor taking his first cruise, hoping for a shipboard romance. On the prowl for the elusive hard-body, he quickly becomes disillusioned, wondering if his expectation of a boatload of beautiful sea nymphs is something found only in travel brochures.
Until he meets Angel.
She is the girl of his dreams, brought to life as a bewitching goddess, ready to engage in every sensual delight. Quickly lured into submission by Angel’s seductive charms, Dean is ready to surrender his heart and soul to this provocative beauty.
Until he meets Marcie . . .
The Cruise – All That Glitters is available now
in kindle eBook from Amazon

Author Bio: Jaye Frances is the author of The Kure, a paranormal-occult romance novel, The Possibilities of Amy, a coming-of-age story of high school romance, The Cruise-All That Glitters, a humorous adult satire about a single guy hoping to have a romantic encounter at sea, and The Beach, a sci-fi fantasy about a man who is given the opportunity to receive his ultimate wish—and lives to regret it. Her next book, scheduled for a November 2012 release, is titled Love Travels Forever, a collection of poignant short stories and essays.  She is also a featured columnist for the NUSA SUN magazine. Born in the Midwest, Jaye readily admits that her life’s destination has been the result of an open mind and a curiosity about all things irreverent. When she’s not consumed by her writing, Jaye enjoys cooking, traveling to all places tropical and “beachy” and taking pictures—lots of pictures—many of which find their way to her website. Jaye lives on the central gulf coast of Florida, sharing her home with one husband, six computers, four cameras, and several hundred pairs of shoes. For more information, visit Jaye’s website at www.jayefrances.com, or Jaye’s Blog at http://blog.jayefrances.com

I like fall the best. I live in NY and everything looks so colorful in fall. Apple season is the best.

My Favorite holiday is definitely Halloween! I love decorating for it - and who doesn't like candy? :)

I used to like christmas, but now it´s so many "must do-s" that i don´t enjoy it as much. And since i work shifts and all days, no matter if it´s holiday or not, i just don´t feel the holidays any longer. Depressing, but true =/ Maybe it´ll change when/if i get children.