Review: Fangs and Lullabies by Kalleysten 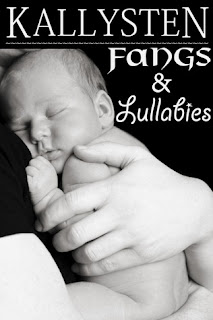 A child’s birth. His first teeth and first steps. School friends and bullies, recess, school plays and science projects. A girl, a crush and a broken heart. These childhood experiences are shared by countless little boys from different horizons.

And yet… Jacob is anything but average. For as long as he has been able to understand, a secret has shaped his life, kept even from his closest friends: his father, Andrew, is a vampire. And so is his other father, Nicholas.

In a strange era when demons are beginning to appear all over the world and threaten humans and vampires alike, the three of them form quite an extraordinary family. And yet, at the same time, they could hardly be more normal.

Two fathers raising a son neither of them ever thought he would have. A Sire and Childe resuming their relationship after years of estrangement. Through snapshots covering Jacob’s life from birth to adulthood, discover this unusual family, and how, in the end, all it takes is love.
My Review:
I have enjoyed erotic M/M from male authors, but have never read one written by a woman.  I must say that I truly enjoyed this book and was so glad I had a chance to read it!!I have a thing for unusual story-lines, and this one definitely fit into that category!!
Andrew had fallen in love with an exceptional talented woman, who decided that they were going to have a baby!  Even though this was impossible considering the fact that he was dead, he truly believed if anyone could make it happen it was the brilliant woman he had chosen for a wife.  Sadly, even though this amazing feat did in fact come to pass, it came with a heavy price.  Cara would never live to see her creation begin his life.  Andrew promised Cara that he would not blame their child if something happened to her and how could he?  He was the only known vampire to literally sire a child, which also would retain Cara's legacy as well.  He greatest accomplishment turned out to be Andrews greatest treasure.
Nicolas was Andrew's first child, not by birth, but by transformation.  Andrew sent him away close to a century ago because Nick could not control his feeding habits.  He like living off human blood but always ended up killing his victims. Andrew turned him out when he found out about Nick's preferences with the promise he could come back if he changed.  Nick struggled for oer 20 years trying to kick the habit and was finally able to get clean so to speak just for the sole purpose of going back to Andrew.  Unbeknownist to Nick, he was about to walk back into Andrew's life when it was at it's most complicated.  Would they be able to pick off where they left off?  Or will Andrew's new addition drive them even further apart?
You caught a little glimpse from each character's POV, but honestly I loved reading it from Jacob's. It was so interesting viewing the situation through his eyes, at whatever age he was at the time.  This book follows Jacob as he grows up with 2 daddies that are both vampires.  Jacob was so easy to fall in love with because he was a very sweet child, and even sweeter adult.  This was a very well written book and the story itself kept you completely involved.  I would highly recommend this book to all paranormal and M/M lovers.  The sex scenes were quite steamy, but the story itself with capture you and tug at your heartstrings!!  Excellent Read!!!

I love when I read a blurb and it's nothing like any other book I've read. That's what I thought when I read the blurb for Fangs and Lullabies. The good review from you only made me more interested. Thanks.

This sounds like a really awesome book, I can't wait to read it!

I've had this one on my wish list. I love the unique story telling format and the family feel this book seems to have.

I've been wanting to try something by this author and this looks like a great place to start :)

Wow, this does sound good. I will definitely have to add this to my TBR pile.

I just Loved your Review of "Fangs and Lullabies". I'll be honest, I'm a HUGE Cover Art Fan & I probably would have passed this Book by, I know it's not right to judge a Book by a cover, but I am being honest....passing this Book by would have been a Great loss for me because it sounds like it is going to be an excellent read, Thank You Nikki for Reviewing it for your Fans.