Happy Tuesday Everyone!!  Guess who I have here today?  Freakn Eve Langlais!!  That's right!!  And she is giving us the skinny on her newest Freakn hit.   I guess you can assume what Freakn series right?  LOL!!﻿ 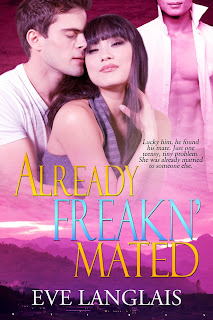 Meeting the woman of his dreams would have worked a lot better if she didn’t already belong to another man. But Chris wasn’t about to let something like ‘until death do us part’ keep him from claiming his woman. He’ll do anything to win his mate, including throwing his attractive cousin at the pesky husband.

Despite the danger, and her marital status, Jiao can’t help falling for a handsome wolf. Honor says she should stay away, but her curious inner cat is flexing her claws and demanding they claim their man.

But Jiao isn’t the only one falling in love. When her husband finds himself head over heels with a she-wolf, will Sheng do the right thing and end the marriage sham? Or will the past catch up first and bite them?

Freakn' Shifters series (each can be read as a stand alone):

Sound yummy?  You know her books are!!!  How would you like to win it?  Just fill out the Rafflecopter!!  Good Luck!!
a Rafflecopter giveaway

You Freakin Kiddin Me?
Freakin Unbelievable!
A Freakin Good Time!

Freakin' Any Way We Can

Love this and LOVE Eve's work!

Thank you for a chance to win :)

I Freakn Have you :)

What Freakin' Happened? (sorta like when you get drunk and end up married/mated)

I can't wait to read this book! I am so excited! I love this series! The excerpt was Freakn' Hot!
slinkydennis@yahoo.com

Title: Not Freakn' Him!

What The Freakin Hell aka WTFH

It's About Freakn' Time.

Ha Ha I love all the titles that came before me. I think the next book should be Freakn' Forever.

Thanks for the chance to win.

How about Totally Freakn' Out.

Thanks for the chance.

Freakin' Crazy or So Freakin' Fine

Adorable n Freakin Wanted.
=) Thanks for the giveaway, looking forward to reading this,

Name for the next one? How about:

I know, totally lame, but I do love your books!

We're Freakn' What?
Get Your Freakn' On

how about "I'm just plain freakin"?
:D i know not very good but i haven't ever been good with titles either.
thank you for the chance at such a great giveaway.

So many great ones I like Freakin Fabulous ! Thank you for the great giveaway!
tishajean@ charter.net