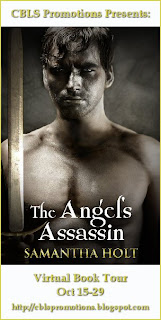 Hello and Welcome to this stop on Samantha's tour!  Today she is talking about the pros and cons of being a medieval writer..lol.  Let's see what she had to say:
The pros and cons of being a Medieval Romantic writer
Pros
1. You walk around in a rosy haze making the world seem wonderful.
2. You’re creative! This means you can write wherever you want. The bath is my favourite.
3. You fall in love with a new man each time you write a new book.
4. You get to think naughty thoughts and not feel ashamed about it.
5. Watching romantic films is considered research.
6. You get to explore castles as research.
7. After hours of writing medieval dialogue, husband responds very well to being called ‘My Lord.’
8. You expand your cooking knowledge when researching medieval recipes.
9. You learn new things about chosen period and therefore sound amazingly well-educated.
10. You get to write about men in loose linen shirts
Cons
1. You walk around in a rosy haze. Family don’t like this apparently.
2. You brain prefers that you write in bed. At 2am in the morning.
3. You fall in love with a FICTIONAL  man. Husband doesn’t like this much either.
4. You spend so much time thinking naughty thoughts that you forget how to actually do the real thing.
5. All your royalties get spent on tissues when watching said romantic films.
6. You have to explore castles as research - do you know how many steps those things have?
7. You forget how to talk normally after writing dialogue and the postman is never impressed. I thank thee for thy missive, good Sir.
8. You learn useless things that will never impress anyone.  Cobwebs were considered to cure warts in medieval times - try using that as a conversation starter.
9. You have to write about men wearing hose. Hose are not sexy.
10. Family refuses to eat medieval culinary delights  thus rendering knowledge useless. Why will they not eat a recipe delightfully named ‘Garbage’? 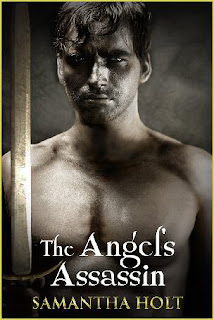 A medieval story of love and betrayal.
As a rebellion sweeps , Lady Annabel finds her home overrun by rebels. Much to her relief, a dark knight comes to her rescue, claiming to have been sent to protect her by her uncle.
But Nicholas holds a secret about the job he was sent to do and it is a far cry from what Annabel believes it to be. As the attraction between them grows, Nicholas begins to question the dark life he has lived. But is it enough to change him and will Annabel ever trust again after learning the true nature of his sinful duty?

“What is your name?”
He stared at her as he paused mid-bite. Withdrawing the bread, he shifted uncomfortably.
“My name is of no import, my lady.”
“I would know the name of my rescuer.
He looked to the floor. “I am no rescuer, just a lowly knight doing his duty.”
“Your modesty becomes you, Sir Knight, but I would still know your name.”
Annabel awaited his response, the air between them growing uncomfortably thick.
He heaved a sigh, wondering how it was that a diminutive woman had got the better of him.
“Nicholas,” he grated out reluctantly.
“Nicholas,” she repeated softly. “And I am Annabel.”
“I know, my lady.”
“Nay, Annabel. Not ‘my lady’. You have surely earned the right to address me as such.
He shook his head, dropping his gaze to the ground once more. He could not bring himself to utter her name, not when he knew what was to come. “Nay, my lady, I am your servant and I will address you as a servant should.”
Annabel must have sensed she was fighting a losing battle as she protested no more and fell silent. Nicholas risked sideways glances at her as her as she nibbled delicately on the hardened bread, and he realised he took far too much pleasure in the sight of her ample lips moving with each bite.
Brushing the crumbs from her skirts, Nicholas watched, mesmerised, as she twisted her long braid over her shoulder. Tugging on the red ribbon that tied the end of the braid, it loosened, sending the length of her hair shimmering across her shoulders. It brushed the dirt and Nicholas felt his mouth dry as she touched a finger to his arm. Surrounded by a halo of hair, she glanced up at him, her mouth curling. Without a word, she tied the ribbon about his large arm and fussed with it until she was satisfied.
Nicholas touched tentatively at the ribbon and gave her a perplexed look.
“You saved my life, Nicholas. ‘Tis a favour from a lady to a knight.” She grinned at his confusion. “You have received favours before, surely? I would expect a knight of your valour to have championed many a lady.”
He wondered if she was teasing him but her expression was completely guileless. He groaned inwardly. This woman probably believed wholeheartedly in courtly love. From his little experience he had come to conclude that it did not exist.
“For fear of disappointing you, my lady, I am sorry to admit that there you are mistaken. I have championed no ladies.”
“Well, ‘tis no matter,” she told him with a tender smile, “For you have championed me.”
Unable to bare her dazzling eyes any longer, he stood abruptly. Champion? He laughed inwardly. She had no idea of the kind of man he was, and he was thoroughly aware that he was far removed from the heroic knights that minstrels and poets spoke of.
He felt a pang of something, an uncomfortable sensation settling in his gut. Nicholas couldn’t name it but he didn’t like its implications. For all her naivety and gentle manners, this woman was going to be trouble. He felt threatened by her somehow, as if she had directly challenged him rather than quietly accepting his every word without question.
“Are you ready to continue on, my lady?”
Annabel sighed and stood, in spite of her obvious weariness. “I am in your hands, Nicholas. I will do whatever you command.”
Nicholas tried to tamp down on the desire stirring in his loins at her words and failed. Instead, he grunted and turned away, stomping off without checking if she was following. The sooner this job was over, the better.
About the Author:
Samantha Holt resides in , , with her twin girls, having followed her soldier husband around the for nearly 10 years. Growing up in Hampshire, she was inspired by the authors Jane Austen and Elizabeth Gaskell, both of which lived and wrote only miles from her home town.
Samantha loves the romance genre and has been devouring romantic literature for as long as she can remember. History is another passion of hers and she loves to combine her love for history and romance into exciting and passionate tales.
Contact Samantha at:
Website - http://www.samanthaholt.org.uk
Facebook - http://www.facebook.com/romanticfiction
Blog - http://www.samanthaholtauthor.blogspot.co.uk
You can follow along the tour here:  http://cblspromotions.blogspot.com/2012/10/scheduled-vbt-angels-assassin-by.html
a Rafflecopter giveaway

Awesome excerpt. Thanks for the chance to win.
Yvette
yratpatrol@aol.com

I like the excerpt so far, will have to add to my TBR. Thanks.

Love the excerpt! Thanks for a chance to win!

Thanks Susan and Barbara! Good luck!

Wow! The Angel's Assassin sounds fantastic! Best of luck with your blog tour.

Thanks for the giveaway. Please enter me. I would love to read this book. It sounds really good. Tore923@aol.com

I thoroughly enjoyed the excerpt for The Angel's Assassin and look forward to reading it soon.
Best wishes and continued success
cms72023 at gmail dot com

Loved the excerpt and the book sound amazing!

Thanks for this great opportunity.

Great exert and thanks for being part of the blog hop! It is my first and I am loving it.

This sounds so good thank you for the great giveaway!
tishajean@ charter.net

thanks for a great post and giveaway! This book sounds fabulous :)

Thanks for the great interview and excerpt. I love your list of pros and cons :)
kitcat76(at)hotmail(dot)com

Cannot wait to read this book it sounds fantastic .Thank you for sharing and for this chance to win.Have a great weekend .

thanks for the fun post and great excerpts! This book definitely caught my attention :)

Laughing at the pros & cons!

Thanks for the opportunity to win

great interview! made me want to read this book! :)

Loved the excerpt! Thank you for the chance to win~<3

Love this and can´t wait for my chance to read, =)

Thank you all for your kind words! Good luck to everyone!

I'm looking forward to reading THE ANGEL'S ASSASSIN. It looks fabulous. Loved the excerpt thank you.

Excellent excerpt and I cannot wait to read more! sdylion(at)gmail(dot)com

This book is sounds awesome, I would love to add it to my collection.

I am SO excited about this book hosting Samantha on my blog. Think I'm falling for Nicholas already!

Thanks for the excerpt, will definitely be adding to my to-read list!

this is going on my to be read list! love the blurb!
miriam.whitewolf@gmail.com

Thanks for sharing the blurb and excerpt of the book :)

You picked the right section of the book to have us wanting more! Great excerpt. Thanks for the giveaway - man I loved to win this book and would definitely post a review. ~Brenda

I loved the pro's and con's! such is a writer's life!

Ha! What I want to know is did the cobwebs really help with warts - man I have possibly been throwing away a gold mine LOL Thank you so much for sharing with us today and making me smile. Looking forward to reading The Angel's Assassin :)

Thanks so much for the contest!
forettarose@yahoo.com