Giveaway, Review, and Inteview with Jaye Shields and her book Confessions of a Sex Demon 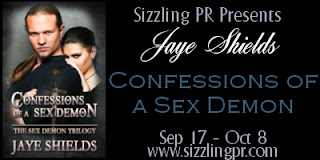 Welcome to a Freaky Friday here on CEWTNK.  It's finally here and it's time to take a look at another yummy naughty!!  Today I have Jaye Shields on the blog and she is to share a little insight into her work and in this book!!  Let's take a look at what she has to say:
How old were you when you first realized you wanted to write?
Forever ago. Did I actually think I’d be published by 24. Probably not, especially since I never finished anything I started until just last year.
Tell us a little bit about the book.
Zahra proves that sex demons do it better as she goes from captive to captivator.
Sex Demon Zahra Aniron is a closet romantic. Too bad she spends her time having hot, kinky sex with paying strangers. But she needs the money to pay off her sister's debt to wizard thugs. There could be worse things than getting paid for pleasure, especially since a sex demon needs climax to survive.
As a blacksmith, Lennox Aegros puts his fury to good use pounding steel into swords. When he arrives at a new town, his real cause for being there isn't to sell weaponry, it's for revenge. When he finds the succubus he's been searching for, her beauty means he can mix business with pleasure. But the joke's on Lennox, because as he succeeds in torturing his victim by repeatedly bringing her to the brink of orgasm and then denying her the release that she so desperately needs, he realizes that Zahra's slow demise means the breaking of a heart he didn't think he had.

What was your biggest influence that steered you towards writing?
My imagination. It had to be documented. It was an easy transition since I was read to from a very early age and bought tons of books during my adolescence. It was a joy to read, but I wanted to tell my own tales.
I have to ask, what are the hardest scenes for you to write?
Hate to say this, but none. For me, the hardest part of writing is not writing, but editing.
Are sex scenes difficult for you to word?
No, although I have had a couple bad mishaps caught by my crit partner. Let’s just say it wasn’t good.
Do you see yourself writing in another genre?
Yes. I love paranormal, but I just submitted a historical/paranormal and am currently 20k into my contemporary.

Has your family been supportive?
My family is extremely supportive. Even my grandma has read Confessions of a Sex Demon. Ever since the days I was writing with crayons, my mom, my dad, my aunts, everyone in my family has been behind me as a writer.

Are any of your characters reflective of you?
Yes, especially the characters in my paranormal trilogy Immortals in Alameda. The first book releases October 29th, 2012 and takes place in the city where I live. With the Sex Demon trilogy, I have to use way more of my imagination. I mean, Zahra’s a prostitute and Sephina (Addictions of a Sex Demon) has a drug problem. Tee-hee, these are definitely not subjects I have experience with.

What do you like to do when you're not writing?
I love to travel and have been fortunate to go many places. When I’m at home, I’m usually reading, playing guitar, or hitting up all the cool things to do in the San Francisco Bay Area.

Who is your favorite book heroine?
Lucia and Nix are two of my favorite heroines, and both are from Kresley Cole books. Regin comes in third. Yep, I’m addicted to Ms. Cole.
Do you have any unusual habits that revolve around writing?
Yeah, drinking entirely too much coffee and consuming way too much Devonshire cream with my lemon ginger scones.

What is your favorite mystical creature?
The Pegasus. Dragons come in a close second place.

How do you feel about reader comments?
I can’t wait to have some!

Do you have any advice for new authors?
Don’t give up doing what you love just because of a little rejection. Take it and drive forward to prove those people that they missed out. BIG TIME.

Where are your books available?
J Confessions of a Sex Demon is out September 17th and will be available in digital format through Barnes and Noble, Amazon and my publisher’s website, http://www.beachwalkpress.com.I 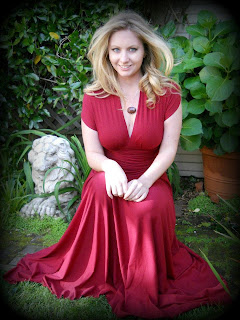 About Jaye: Born and raised in the grunge capitol, she took her love of music and poetry from the Pacific Northwest to California. Now she lives in Alameda, a quaint island town in the Bay Area. With a degree in Anthropology-emphasis in Archaeology, she’s itching to climb some more pyramids. When she’s not writing, she’s either at her day-job or taking long walks along the Alameda beach and gazing at the outline of San Francisco in the distance. Oh yes, and her heart can generally be found in Paris... 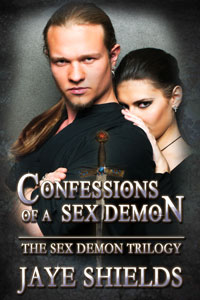 Sex Demon Zahra Aniron is a closet romantic. Too bad she spends her time having hot, kinky sex with paying strangers. But she needs the money to pay off her sister's debt to wizard thugs. There could be worse things than getting paid for pleasure, especially since a sex demon needs climax to survive.
As a blacksmith, Lennox Aegros puts his fury to good use pounding steel into swords. When he arrives at a new town, his real cause for being there isn't to sell weaponry, it's for revenge. When he finds the succubus he's been searching for, her beauty means he can mix business with pleasure. But the joke's on Lennox, because as he succeeds in torturing his victim by repeatedly bringing her to the brink of orgasm and then denying her the release that she so desperately needs, he realizes that Zahra's slow demise means the breaking of a heart he didn't think he had.
Content Warning: strong language, graphic sex, light BDSM scenes
Purchase Book: Beachwalk Press
Excerpt
Zahra woke to a sharp pinch against her skin. She tried to peel open her eyelids, but they were heavy stones. She wanted to touch her eyes, but her arms moved nowhere. Fear caused her lids to fly open only to realize that she was indeed strapped down.
The perpetrator smiled, but it was subtle. Very subtle. His tan skin was darker in the dim room. His blue irises appeared so light that his eyes became demonic charcoals glaring at her in the shadowy room. He finished strapping her foot down.
"Do you like your accommodations, demon?"
"You should have asked Bane for help decorating. He's also very good at the dark, gloomy dungeon thing." She'd hoped to sound feisty, but instead, her voice was nothing more than a pitiful rasp.
"Since you're used to your mouth being filled, I'll help you." Lennox stood over her. She never took her eyes from his intense frown as he tied a scarf around her mouth. He pulled it tight enough to cut into the edges of her mouth. Zahra did her best to smash his fingers into the cold metal table she was strapped to. Unfortunately, the back of her head missed its mark and thunked hard against the steel.
At least she could still see what was taking place. Fear coursed through her. She barely knew this man and she couldn't imagine what he had in store for her. She was a succubus, used to kinky requests, and most men knew they didn't need to kidnap her for such a session. She watched Lennox's tall form cross the mostly empty room. The only furniture was a small table. Probably where he kept his—
Scissors. Lennox turned toward her with a pair in his hand. As he walked in her direction, he looked entirely too innocent to be foreboding. His blond hair was a stark contrast against his tan skin. She'd felt his muscles earlier and they were those of an intense lover, not a fighter. Clearly this guy was tweaked. He was hot as hell and normally she liked freaky guys. If he hadn't insulted her ever since they first met, they might've even had a chance. No charge.
Lennox stood between her legs and she could barely see him from her tight bondage against the table. The cold metal of the scissors slipped under her corset. As the fabric began falling away, the soft groan of the metal cutting through thick black fabric echoed in the empty room. Her tight top became looser with every passing second. Heat crept into her body. Good news: she had the feeling this guy could make her come. Hard. The bad news: she was kidnapped by a psychopath and no one knew where she was.
Maybe he's a trap-and-set-free kind of psychopath. Love 'em and leave 'em.
"Your body betrays you. You crave your abductor, don't you, succubus?"
She avoided his gaze by staring at the ceiling. Zahra could feel the heat from his intense appraisal of her body as he guided the shears across her pants. Apparently, he was leaving no clothes for her to try to escape in. It was becoming clearer by the moment that he had no plans for her to leave.

All my followers know that I have a thing for demons.  I even have a level in my dungeon, just for them because well they certainly are talented in ALL areas!!  It's not to often that we read about a Succubus or that she ends up being more than what she seems.  Zahra was trapped by her own unwillingness to allow harm to come to her sister.  Seph was indebted to the nasty wizard who ran the town and Zahra was determined to work it off.  She was hugely loyal to family and couldn't think of any more harm coming her way.  Seph had already received a raw deal dished out by her father, and she didn't  need anything else else to deal.  Lennox, out hero in this book  has a rotten past and has tracked Zahra down in order to satisfy the need for revenge.  But once he has her, will he be able to go with the original plan of slowly starving her to death?  The author did an excellent job on this little quicky.  It was interesting, fun. sexy, and short!!  I look forward to more from this author!  This was a very good read and I have enjoyed it immensely!!!

Now for your chance to win!!  Just fill out the rafflecopter!!  Good Luck!!
a Rafflecopter giveaway

Thank you for hosting me on your dead sexual blog! Do glad you enjoyed Confessions of a Sex Demon. Zahra's brothers story is next and Sephinas story is third. Hers might even be my favorite... Thanks again! XOXO

I don't really have any favorite demon. Though after reading about this book, I am leaning toward Zahra. This book is going on wishlist.

Susan, Zahra will steal your heart. Or at least I hope so, let me know ;)