Giveaway and Tour Kickoff with Victoria Danann and her Book The Witch's Dream!! 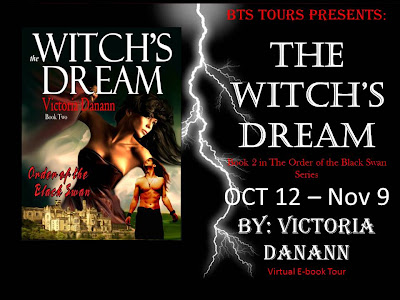 Good Morning my wickedly wonderful viewers!!  Today I have Victoria with me and we are talking about music and of course her newest book, The Witch's Dream.  I asked Victoria to share her top ten must be included in the book soundtrack songs and this was her response:
) “Stranger” – Jefferson Starship (Elora’s song) This song actually inspired the title of Book One.
2.  ) “Never Gonna Give You Up” This song is actually an integral part of The Witch’s Dream. The book trailer features Derik Nelson (my real life Rammel Hawking) doing Ram’s acoustic version of the song. **referrenced in the book
3   ) “Season of the Witch” – Donovan (Litha’s song)
4   ) “I Burn For You” – Sting (Songs for Dreaming)
5   ) “Rider on the Storm” – The Doors (Songs for Dreaming)
6   ) “Waiting for You” – Seal (Storm’s song)
7   ) “Fix Me” – 10 Years (The Demon’s Song)
8   ) “Never Gonna Give You Up” – Rick Astley (Kay’s song) **referenced in the book
9   ) “Now and Forever” – Richard Marx (Ram’s song)
1   ) “Werewolves of London” – Warren Zevon (Baka’s song) **referenced in the book
Great Selection!!  Now let us take a look at The Witch's Dream: 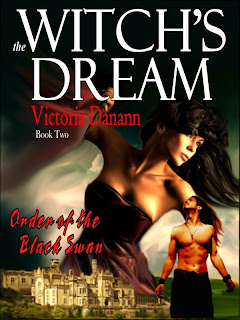 The Witch's Dream, By Victoria Danann
The Order of the Black Swan #2 Genre: Adult Paranormal ROMANCE, Paranormal Fantasy
Publisher: 7th House
Release Date: October 14, 2012
ebook ISBN: 978-1-933320-56-4       https://www.smashwords.com/books/view/177745     (Amazon ASIN tba 10/06/12)  WORDS:  98,000 print    ISBN: 978-1-933320-63-2      Amazon: http://www.amazon.com/gp/product/tags-on-product/193332063X/  (available 10/06/12) PAGES: 268 (5x 8 paperback)
BOOK TRAILER: UNLISTED until 10/01/12 http://www.youtube.com/watch?v=-KPUGx6zQE0&feature=youtu.be
BOOK DESCRIPTION:
He was left behind when Elora Laiken made her choice. Now he’s had it with love, but a transplanted witch who happens to be the world’s best tracker hopes she can change his mind.
The Witch’s Dream begins with B Team on loan for temporary assignment to Black Swan headquarters in Edinburgh where they are supposed to fill in for stretched-thin resources and assist with a werewolf issue. They’ve been given permission to stop in Ireland for a few days and help Ram and Elora celebrate their handfasting at the palace in Derry.
When they reach Edinburgh, the afterglow of an elftale wedding quickly turns all business. A missing person report turns into a demon abduction. A simple werewolf sanction becomes a diplomatic issue requiring the one thing Elora is no longer willing to give - finesse. From New York to Ireland to Edinburgh to Siena to the Texas Hill Country to Napa Valley. From promises to rages to hunts to epiphanies.
This is a story that proves true love can find you when you’re least expecting it – even when you’re far, far from home.
Erotic quotient: A few steamy scenes. No menage. No BDSM.
EXCERPT :
When Kay’s bunch arrived it suddenly seemed as if the one hundred seventy five room palace on twelve thousand acres would not be nearly big enough. His family had migrated to South Texas in the nineteenth century and found it agreeably inhospitable. Berserkers enjoy a good challenge. So they founded an organization to clean up the mess, taking on rowdy itinerants who heartily embraced a get-it-done, no-rules philosophy and called it the Texas Rangers. Were it not for berserkers it seems unlikely that the frontier mix of Comanche, desperados, and javelina could have been subdued so relatively quickly and by so few.
Chaos Caelian, named such by his maternal grandmother as was her privilege in berserker society, was affectionately known as Kay. It was the nickname bestowed upon him by his teammate Rammel Hawking soon after they’d met. Ram had thought a knight named Kay – like the foster brother of King Arthur from Arthurian legend – was amusing. So Chaos became Sir Kay and it stuck. Even his own parents eventually began calling him Kay.
Yes. Everybody knew the near giant knight as Kay except for his three older sisters who refused to give up calling him Bubba, never letting him forget for a minute that he was the “baby” of the family. The four youngest Caelian children were close in age, only a year apart, and in familial ties. There was a much older brother, but he and their parents almost seemed to comprise a second family. The three preschool girls started out calling him “brother”, but the nickname quickly degenerated into Bubba and would not go away.
Their grandmother, sometimes called Evil Gran by those she had named, gave the girls similar hardships to bear. Having inherited the “sight” from her own grandmother, Evil Gran claimed she knew three girls were coming and set out to name them after the Norns; the three keepers of time according to Norse myth. Hence, they were named in order of linear time – past, present, and future: Urda, Verdandia, and Skulda. In a triumph of sibling camaraderie and conspiracy over custom, their names had morphed into something more suitable before they entered kindergarten. Urda became known as “Urz”, Verdandia as “Dandie” and Skulda did a triple twist into “Squoozie” which, odd as it was, seemed like a custom fit.
Elora had once heard Kay say that opening the door to his boyhood home was like going through the wardrobe to the land of “Nornia”.
The entire family resembled the popular perception of Vikings: tall, fair haired, fair skinned, with blue eyes, an abundance of athletic ability, and an indomitable desire to know where to plunder the best jewelry. Fortunately the family had accumulated multigenerational wealth in land, cattle, and oil in the late nineteenth and early twentieth century so the quest for jewelry did not require going a’viking as it was known in the old days. Kay’s sisters were content with the occasional plunder of Gump’s, Tiffany, and Cartier. Author Bio:  For the past thirteen years, Victoria has illustrated and authored Seasons of the Witch calendars and planners. Though works of fiction are a departure for her, she has had this series simmering on the back burner of her mind for years. In addition to authoring and illustrating Seasons of the Witch, she plays rock music and manages one of Houston's premier R&B/Variety/Pop bands.  This series will eventually include some of my actual experience in the paranormal with fictionalized anecdotes from my journals during the years when I was a practicing "metaphysician", but most of the material is fantasy - of course.
WEBSITE: http://www.VictoriaDanann.com
BLOG: http://VictoriaDanann.me
FACEBOOK: www.facebook.com/vdanann
TWITTER: @vdanann 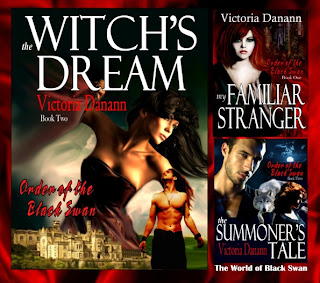 Hi Victoria!!! I really love the cover of your book and can't wait to read it.

looking forward to read ur books. thanks for the chance :)

Hi Victoria, I'm new to your books but I look forward to reading them. I love witch themed books. (Then again I am a Goddess Worshiper)

Love this and can´t wait for my chance to read, =)
Love the giveaway & Happy Friday!
//Linda

Thanks for the giveaway! I look forward to reading your books. :)

Hi Victoria, thanks for the chance to win one of your books. They look great and will be adding to by tbr list.
magic5905 at embarqmail dot com

Hi Victoria, the book sounds great. And I have always loved your calendars. Can't wait to read this book.

Hi Victoria-
The cover is great. The book sounds wonderful and I am looking forward to reading it. Thank you for the opportunity to win

Hi Victoria!
I am just finding out about you, look forward to reading your book.

The descriptions are very alluring!

Hi Victoria!
I am just finding out about you, look forward to reading your book.

The descriptions are very alluring!

thanks for a fun post and congrats to Victoria on the new release :)

Hi Victoria. I'm looking forward to seeing you at some of the other stops on your tour. Have fun with it.

Hi! Great post, i can't wait to check out your work :) Thanks for the chance

Victoria - Your picture is adorable!! Love it! Thanks for sharing your soundtrack and such a fun post. Cannot wait for your book...I get to post on it soon too!

Sounds like a fun series. I put the first book on my TBR list.
mcv111 at hotmail dot com

I have this book in my to read list - along with the second.... I bought this a while back and..well - I'm reading it now.

Sounds like an amazing read and I will be adding the series to the TBR list. sdylion(at)gmail(dot)com

Hi Victoria, your a new to me author and i cant wait to read your books.

Hi Victoria! *Waves*
Congrats on the release of your latest book!

Hi Victoria Congratulations on your release and thank you for this chance to win.Have a great weekend.

Hi Victoria!! Love the covers! The books sound great! I just added you to my TBR list! Thanks for the post and for the chance to win!