Hello and welcome to this stop on The Hollow Giveaway Blog Hop!!  I have the incrediably talented Honey Jans here to share a little about her book, insight into her writing, and to giveaway a copy of her Naughty Goldie and the Three Bears!!  Take it away Honey!!
How old were you when you first realized you wanted to write?  I was a late bloomer.  I was thirty when I turned my hand to writing.  My sister gave me two grocery bags full of her used paperback romances and I couldn’t stop reading them.  When I was finished I thought I bet you I could write one.  Of course it was a lot harder than I thought but I love it and wouldn’t want to do anything else.
Most authors have an unusual story or way that they come up with their ideas for books…Do you have one?  As a matter of fact I do.  I’ve had two books come from an opening line that just popped into my head.  They kept bugging me until I wrote them down.  I’m inspired by many things from a phrase I might overhear to a daydream that comes while I’m driving.

What was your biggest influence that steered you towards writing? My love of reading was my biggest influence.  When I was younger I must have read most of the books in our small library.  Then I graduated to paperback romances and the die was cast.
I have to ask, what are the hardest scenes for you to write?  I have the most trouble with conflict and violence which is crazy for a writer.  The first time I had to kill off a bad guy in one of my books I cried.  I hated to do it even though he was pure evil.
Are sex scenes difficult for you to word?  No.  The sex scenes usually flow easily for me and I enjoy writing them.  I always try to keep things fresh.
Do you see yourself writing in another genre?  As a matter of fact I’d like to try my hands at a mystery some time.  Of course knowing me it would be an erotic mystery :-)

Has your family been supportive?  My close family has been very supportive and I really appreciate it.

Are any of your characters reflective of you?  I think you’ll find a little bit of me in all my heroines especially Goldie Lockwood in Goldie and the Three Bears.  She’s got a lot of my sass and irreverent humor.  And she also has my deep sense of family loyalty.

What do you like to do when you're not writing?  I like to paint and I love to travel.  I also love to read and I’m never far away from my Kindle.

Who is your favorite book heroine? Do I have to pick just one?  I have so many favorites.
Do you have any unusual habits that revolve around writing?  Actually I like to get a steaming cup of coffee in the morning and drink it while I’m writing.  I also like to take my laptop outside and into nature to write.  It helps free me up.
What is you favorite mystical creature?  I love shape shifters of all kinds.  I also love vampires.  Mind you I didn’t think I would when I first  gave them a read but I wanted to broaden my horizons.  Well I picked up my first Sherrilynn Kenyon dark hunters novel and I was hooked.

What were some of your biggest challenges at the beginning of your career?  Finishing the darned book.  I was rewriting the first three chapters over and over again.  Basically, I was on my own at first and didn’t have a clue.  But once I got involved with Romance Writers Of America and joined my first critique group I was on my way.

Do you have any advice for new authors?  Yes.  First be a reader.  Then join a professional group for guidance, be it RWA, or EPIC.  You can find some awesome support and mentorship there.

Where can we reach you and become informed of updates? my website is www.honeyjans.com and my blog is http://atasteofhoneyjans.com 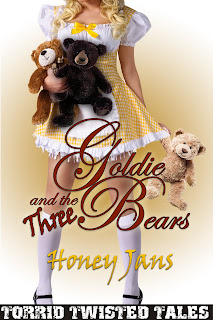 Hansel and Gretel, would be a fun horror story :)

Cinderella, would be my vote. thanks for the hop!!
miriam.whitewolf@gmail.com

The little mermaid would be awesome!

My favorite fairy tale was always Snow White so I guess I would pick that one. Seven dwarfs has infinite possibilities for story lines!

Beauty and the Beast. Yeah, Disney did a great job, but I need something a little darker and sexier for my fairy tales!

I would like to see Peter Pan remade.
skpetal at hotmail dot com

I know Anne Rice wrote a book that played off of Sleeping Beauty, but it was demeaning and violent. I want a true romance made out of it ;) Something beautiful and more grown up than Disney!

Thanks for a great giveaway! :)

thanks for the great giveaway! Beauty and the Beast :)

There is a Lil Red Ridinghood or the three little pigs ( ... tweek it a bit on the characters and ...)
Thanks for sharing the interview and book ... Book has been on my TBR list for a week or two :)

Thanks for the giveaway,
//Linda

Sleeping Beauty is the one I want to see redone.

Beauty and the Beast. I would like to see how beastly he could really get.

I'd like to see Beauty and the Beast redone. I've always loved that story

This is a difficult question as so many are being remade - I think there is one, I am not absolutely sure of the name, but I think it was the Princes and the Frog - what possibilities there!

Little Red Riding Hood. Thanks for the giveaway.

I would like to see Little Red Riding Hood.

Snow White would be my choice. Thanks for being part of the hop and for the chance to win. <^_^>
reneebennett35(at)yahoo(dot)com

Red Riding Hood- want to see all those teeth! sdylion(at)gmail(dot)com

I really enjoyed this interview. and the excerpt. lisagk(at)yahoo

Snow White and the Seven Dwarves.

Beauty and the Beast!


beauty and the beast...

Beauty and the Beast with beast as a shape shifter of course.

I'd like it to be either Beauty and the Beast or The Little Mermaid.

CINDERELLA would be a fun re-making.

Beauty and the Beast

Thanks so much for the contest!
forettarose@yahoo.com

Beauty and the Beast. Will always be a favorite :)

Snow white! Thanks for great contest.
Thanks.

This Fairy tale I doubt you know. Don't remember the original name. Something like "More than salt".

Thanks for giveaway,
Adila

I'd like to see Little Red Riding Hood's big bad wolf all redone and sexified! LOL!

OH and to Adila ---- I don't remember the name either but I know what you're talking about. A girl loved her father more than salt and he banished her from his home because he thought she didn't love him. It's a good story.

I would like to see Red Riding Hood and Hansel and Gretel :) Thanks for the giveaway!
flava_sava_chick@yahoo.com