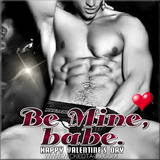 Yes...I will be yours!!  Hello CEWTNK!!  Today I have the fabulous author Karice Bolton to share not only her characters first kiss, but her awesome new series as well!!  Take it away Karice:
﻿
Thank you so much to Nikki for allowing me to provide a guest post!  In honor of all things in the kiss category, I thought it would be fun to provide an excerpt from Awakening between Ana and Athen.
A little snippet about me, and why I find it so fun to write at least a few romance scenes in most everything I write is because I married my H.S. sweetheart.  I totally believe that falling for people hard and fast isn’t a bad thing.  It might not be for everyone, but it worked for me (many moons ago)!!  So for this series, I thought it would be intriguing to dive into long lost loves, memory loss, fallen angels, and battling for it all in The Watchers Trilogy. As the titles kind of allude Awakening has more romance, Legions has romance and lots of battles, and Cataclysm has a lot of both!!  Cataclysm will be out in the Spring!!  I hope you fall for Athen as much as I did while writing about him and Ana.
I’d love to hear about your first smooch in the comments section below – whether it was hysterical, out of this world, or completely forgettable!
Thanks again and hope to hear from you! 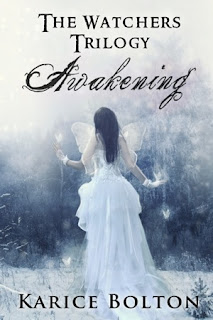 Alone in snowy, remote Whistler village, Ana tries to build a new life since losing her parents. With a cozy condo, a sweet-faced bulldog and an evening job to leave the days free for the slopes, life slips into a great routine. If only she could shake the guilt for not remembering anything about her parents and banish the night terrors that haunt her every dream.
On a whim, Ana goes out with Athen, a guy she's just met in the Grizzly Pub... The only problem is that she feels like she already knows him.

Doesn't this look like an amazing!!  Come back soon for the review!!!!

My first kiss was totally forgettable. I can't even remember who it was.

I remember my first kiss. It was at camp. I was 13 lol but it was hot to me. Oh Mark ♥
MaDonna
derna4u@yahoo.com

Andrea- So funny! That's probably a lot of people!!

MaDonna- I love that it was at camp!! So awesome and so true!! At 13 it was probably the most exciting thing EVER!!

Thanks for writing guys!!

~Karice
For some reason I show as unknown on Google LOL