Love is in the Air Giveaway Hop 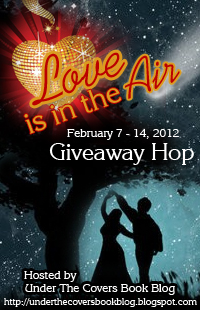 Hello and welcome to CEWTNK!!  I'd like to start off by saying thank you to all of the wonderful ladies at UTC for putting this together!  They have an excellent blog and I have been a follower for as long as I have been blogging!!  You chicks rock!  So here today I have 2 books to giveaway.  These are e-books, so they are open to everyone!! 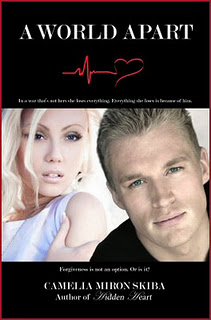 In a war that’s not hers, she loses everything.
Everything she loses is because of him.
Forgiveness is not an option.
Or maybe...Lieutenant Cassandra Toma, trauma surgeon in the Romanian National Army starts her deployment at a joint-unit air base on a wrong foot, clashing on her first day with her new commander, Major David Hunt. Her rebellious nature and sassiness rival her excellent performance in the operating room—the only reason why she's not reprimanded, or maybe not the only reason.

They meet. They clash. A forbidden passion consumes them with the intensity of an erupting volcano, leaving her heartbroken and him with tarnished honor and pride as an officer. The only way out for David is disappearing into the dangerous warzone in Iraq. Their flame was supposed to be over when destiny brings them back under the same roof, this time with a common goal—to find Cassandra's brother, Maj. Robert Toma, kidnapped by insurgents while on patrol.

To rescue Robert, Cassandra and David put aside their resentments, uniting forces against a common enemy. Trying to forget the painful past, Cassandra opens up to give David—and their love—another chance. What she doesn’t realize is that her anguish is the result of David’s impetuous action—one reckless choice he made for which she may never forgive him.

His mistake, his secret, could cost them both the love they've finally found. 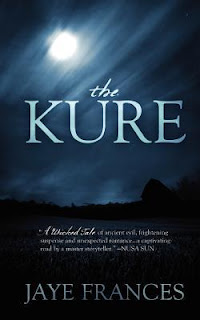 John Tyler, a young man in his early twenties, awakens to find a ghastly affliction taking over his body. When the village doctor offers the conventional, and potentially disfiguring, treatment as the only cure, John tenaciously convinces the doctor to reveal an alternative remedy—a forbidden ritual contained within an ancient manuscript called the Kure.

Although initially rejecting the vile and sinister rite, John realizes, too late, that the ritual is more than a faded promise scrawled on a page of crumbling paper. And as cure quickly becomes curse, the demonic text unleashes a dark power that drives him to consider the unthinkable—a depraved and wicked act requiring the corruption of an innocent soul.

Ultimately, John must choose between his desperate need to arrest the plague that is destroying his body, and the virtue of the woman he loves, knowing the wrong decision could cost him his life.

So up for grabs is a copy of each!!  Just fill out the rafflecopter form.  Feel free to join in all the rest of the great giveaways here and be sure to check out the other great blogs on this hop!!!
http://underthecoversbookblog.blogspot.com/2011/12/love-is-in-the-air-giveaway-hop-sign-up.html

Thank you for participating in our hop! <3

Thank you so very much for hosting A World Apart. I'm very grateful to you for being part of the tour.

I LOVE Cami's book. She's one of my fave authors!!

The first book I fell in love with was The Wedding In White, a cute story by Diana Palmer. Thanks for participating in the Blog hop.

First book I loved was City of Glass, Cassandra Clare.

Hmmm, Little Women was one of the books I first fell for.

I've read A World Apart and I adore this book! And the author as well. :o)

I have been wanting to read the Kure and the other 'World Apart' sounds good too.

My first book to love was probably a Nancy Drew, but my first favorite romance was a romantic suspense by Phyllis Whitney.

Thanks for participating in the hop and for the giveaway opportunity.

Probably dating myself when I say "Gone With the Wind"
Thanks for the giveaway.

Hi! hopping around and happy to find all these great blogs!
Thanks
Lupdilup

THe first romance book I ever read was the Malory series by Johanna Lindsey. I was hooked. I fell in love with them and had to have them all. I've read them more times than any other book. They helped me get through one of my hardest times in my life, the passing of my gramma.

I started out reading the Hardy Boys and the Nancy Drew series.

Charlotte's Web by EB White. I cried and cried to my mom - "why??" And since that first read, I can't bring myself to read it again becaue I don't want to cry those 8 year old tears again
:(...

Thanks for the memories!
NOT
:)
MJB

I can't really remember the first book I fell in love with but I do know that in 5th grade, I read THE OUTSIDERS by SE Hinton for the first time and it stayed one of my faves all though school.
June

The Flame and The Flower by Kathleen Woodiwiss is the book that made me fall in love with romance books.

The one that has stuck in my mind over all these years is Outlander by Diana Gabaldon! I'm still enjoying the new installments as they come out:)
jwitt33 at live dot com

Probably one of the Little House on the Prairie books when I was a kid...I used to LOVE those books! Thx for this GREAT opportunity...Happy Valentines Day <3

So long ago . . . I think it might have been Ashes in the Wind by Kathleen Woodwiss. Thank you for the fun:)

I love reading Paranormal it started with Twilight! I love vampire books one of my favorites!