Before the hate comments start pouring in, one of my guests today, C.S. Splitter(who wrote this post) is in fact a man!!  So if he wishes to gender bash then he may!!  LOL!!  Take it away Splitter!!


Men are Idiots
How many times have you heard that?  The thing is...it is often true.  We all have our moments.  Sometimes, however, being an idiot pays off.  It did for me, at least.
I am the analytical sort.  I look at numbers and try to see patterns.  I research topics to draw conclusions.  This is especially true when it comes to business and writing IS a business.
But I did not do those things before I wrote “The Reluctant.”  I just got some inspiration and tried to write a good story.   Had I done a little research, I would have realized that women rule the fiction market making up about 80% of the audience.  If I had known that beforehand, I would have written a different book.  I would have written a different series.  I would have catered to what I thought women wanted in their reading.
Instead, I made my main character, Tom Crayder, a regular guy.  There are no bulging muscles, no bodices being ripped, and no overt romantic gestures.  I know what you are thinking:  “Splitter!  Not all women demand those things in their books!  Even those of us who like some of that stuff have wider tastes.  You are really stereotyping the female of the species.”
Err....all I am saying is that had I done my research, the numbers might have led me to those conclusions.  I didn't say they would have been right.  In my ignorance, I took my main character one step further: I made him a bit of a pig.  He doesn't mean to be a pig, he just can't help himself sometimes.  He draws wrong conclusions, let's his libido do his thinking at times, and is generally a fellow idiot.
So, I wrote a book with a male lead who has few traditional leading man characteristics AND I made him in such a way that 80% of the audience would have a hard time liking him.  I told you I was an idiot.
However, what no amount of research would have shown me was that women would like Tom.  More than 90% of the emails I receive are from women and, almost universally, they take on this form:
“I didn't like Tom at the beginning.  That part about him considering cheating on his wife was a huge turn off.”
“I hated Lorena, the home wrecker, too!”
“By the end, however, Tom had grown on me.  He reminds me of my husband/boyfriend/friend/brother/father.  Finally!  An honest portrayal of a man.  He really is a good guy and those scenes with his wife are heartwarming.  And are you going to give us more background on Lorena in the future?  I really want to know more about her...”
They, whoever “they” are, say that numbers do not lie.  I disagree.  Numbers would not show just how diverse women's tastes in books really are.  Numbers would not support having a “regular guy” as a main character.  Do women read action/adventure?  You bet.
Ignorance is bliss.  Ignorance run wild is idiocy.  I was wildly ignorant and, now, I am glad about it.
“The Reluctant,” the first book in the series, went nuts on the Amazon charts in January.  Book two, “The Willing,” just came out in eBook form in November.  Both of them have just been released on Amazon in print.
Did I mention that I have made “The Reluctant” free?  Well, it is.  Just follow the links below.  Plus, we are giving away “The Willing” as an eBook today!
If you didn't win “The Willing,” I am also offering a promo price for the blog tour at Amazon.  Free + $.99...I told you I was an idiot.
Splitter
Splitter's Amazon Author Page:  amazon.com/author/splitter
SplittersWorld Blog:    http://splittersworld.blogspot.com/
Facebook:   https://www.facebook.com/profile.php?id=100002241805910
Twitter: @SplitterCS
Let's take a look at his books: 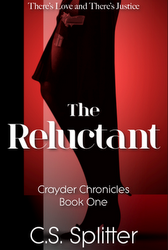 The Reluctant:
Action, adventure, suspense, and thriller in one story told with a liberal dose of humor.

Tom’s problems are not unique. His business is failing and his wife has to work too many hours to make ends meet. He is under some rather large financial pressures and wants more from his marriage and his life.

He finds his respite in the air as a private pilot. Unfortunately for Tom, he is behind on payments for his plane and is forced to take odd jobs from a local crime boss. Tom is no criminal, but the errands he is running are just slightly on the wrong side of the law and the money is almost good enough to allow him to make his plane payments.

Just as things begin to come under some semblance of control, he meets a woman who just might represent the adventure he seeks. He soon discovers that appearances, and beautiful women, can sometimes be deceiving.

“The Reluctant” is the first in the Crayder Chronicles series and yet is a stand alone story with a satisfying conclusion of its own. 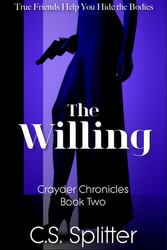 The Willing:
Book Two in "The Crayder Chronicles"
How far would you go to protect your friends and family?
Tom Crayder is the All-American guy next door with a business, a wife, a son, a mortgage, and an expensive hobby. He is also a politically incorrect, wisecracking operative working for a shadowy organization dedicated to administering justice outside of a broken system. Not even his wife knows of his other life when she finds herself unwittingly involved in a drug war.
Strap in with Tom as he navigates his way through the strata of a drug cartel. Lock and load with Lorena, a hard-hearted assassin, as she lends her deadly skills to Tom’s fight for his family. Sit back to watch Tom and Lorena figure out how to work together without killing each other.
Join the rest of the cast from "The Reluctant (Crayder Chronicles)" as they pitch in to track down the hitmen that threaten their associate.
Some mysteries are solved. Some questions are answered. Some live. Some die.

Sounds great right?  Well tune in for the blog hop where this book is up for grabs!!!!

I can vouch, splitter is an idiot savant ;)

you are not the first to make that observation, Jenn lol

I've read both of Splitter's books & thoroughly enjoyed them!! And that opinion comes from an average 77 year old female fishducky!!!

I find that pretty funny that you would have written a different story/series had you known women ruled the book world. Though it seems good thing you didn't know as it seems you have written a great story with a very real character in Tom. Sounds like a good read!