Review of Blue By: Lou Aronica 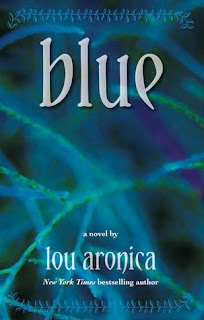 Chris Astor is a man in his early forties who is going through the toughest stretch of his life. Becky is Chris's fourteen-year-old daughter, a girl who overcame enormous challenges to become a vibrant, vital young woman - and now faces her greatest obstacle yet. Miea is the young queen of a fantasy land that Becky and Chris created when Becky was little, a fantasy land that has developed a life of its own and now finds itself in terrible, maybe fatal trouble. Together, Chris, Becky, and Miea need to uncover a secret. The secret to why their worlds have joined at this moment. The secret to their purpose. The secret to the future. It is a secret that, when discovered, will redefine imagination for all of them. Blue is a novel of trial and hope, invention and rediscovery. It might very well take you someplace you never knew existed.

Chris is an amazing dad in the story.  It begins with him trying to put back together his life and relationship with his daughter after the divorce.  His ex-wife, Polly, had come to terms that their lack of a relationship needed to end, child or no child.  No one explained to Becky why the divorce happened, just that her dad had to move out of the house.  It was a really sad introduction to a typical people dealing with the ravaging that divorce causes.  Polly had remarried and moved on while Chris seems to be stuck and unable to move forward.  It isn't due to any lingering feelings for Polly, more the inability to connect with anyone since his daughter was ripped from him.  Even though I can understand Polly's need to feel love, she continuously acts very selfish and spoiled throughout the entire story.  She caused a major rift between Becky and Chris, that felt like it was motivated by jealousy than anything else.  Becky loved her father and throughout Becky's struggle with cancer, Chris basically lived and breathed for his daughter.  Maybe Polly should have taken lessons.   Through Becky's sleepless nights dealing with the horrors of cancer treatment, the stories of Tamarisk were born.  Chris had begun the stories as a way to take Becky's mind off of the treatment and impending dangers the cancer prevented.  Together they created this fantastical world ruled by the beautiful princess Miea, who was everything Becky longed to be.  This world became her way of escaping the pain and it was laid out in great detail between the two storytellers.  The connection was severed by the divorce and Becky swore to never again revisit the realm of Tamarisk.  But all of that changed one night as Becky lay sleeping.

There are signs throughout the first few chapters of Becky's illness returning.  No one seems to notice but her best friend, since Becky is able to hide it pretty well.  The strange thing is that a terrible disease is back on Tamarisk, destroying the animal and plant life.  Will they be able, with the combined efforts of both worlds, to save Becky and her magical land?

I enjoyed this book even though it had a lot of  pain within its folds.   I hate imagining anything happening to a child, being a mother myself.  It always makes you take the parents perspective and wonder what you would do in such a situation.  I would  have shoved my personal life under the bed and completely concentrated on Becky getting better, much like Steve did.  But even though there is pain in this book, there is also beauty and wonder.  I can't imagine being able to see with your own eyes a world in which you so lovingly created.  How the landscape and the animals changed as Becky got older and out-grew somethings.  It truly was a treasure trove of creative genius!!  This is one of those books that makes you believe in magic again!!  I'm so glad I had the opportunity to read it!