Getting to know Shonell Bacon 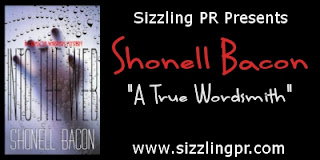 Hello and Welcome to this stop on Shonell's tour!!  I was lucky enough to get an interview and this is what she had to say:

How old were you when you first realized you wanted to write?
I was ten. My mom and I were at a flea market, and she bought me a .25-cent green diary. Instead of writing the typical 10-year-old girly things, I wrote sports articles on my beloved Baltimore Orioles and my own scripts to my favorite soap at the time, The Guiding Light. From the very start, there was something about words and using them to tell stories that appealed to me. That appeal has continued to grow throughout my life.


Tell us a little bit about the book.
Into the Web is about twin mystery novelists, Jovan and Cheyenne Parham. Readers met the women in Death at the Double Inkwell. ITW takes off about two years after DDIW end. In ITW, the twins are still working to pick up the pieces of their lives while trying to find a balance between their writing careers and the relationships they have. Their relationships and writing take a major hit when they find themselves connected to a string of murders involving young teenage girls who are lured off a popular teen social networking site to their deaths. Here’s the book trailer: http://www.youtube.com/watch?v=xsiU17qbBZQ


What made you choose this genre?
Actually, before writing Into the Web (and the debut novel that ITW is a sequel of, Death at the Double Inkwell, I wrote what one would call women’s fiction. Back around 2000, while taking a novel class, we had to pick a book that we would study throughout the semester and then write the first three chapters of a novel in the same genre of the book we picked to study. I picked Mary Higgins Clark’s All Around the Town. It is one of my fave books by Clark, and having reread it for this class, it sparked me to write the first three chapters of what would come to be Death at the Double Inkwell. I enjoyed the whodunit of the mystery genre, of laying complexity into the story to keep the killer at bay from the reader for as long as possible. Writing a mystery, for me, felt like fitting together pieces of a puzzle. Sometimes, you pick a piece and try to fit it, but it doesn’t fit. But then there is that a-ha moment when you see how the pieces fit and can see the whole puzzle. That intrigues me.


Most authors have an unusual story or way that they come up with their ideas for books…Do you have one?
Hmm, not really. My stories come from a compilation of things. Death at the Double Inkwell came from wanting to write a mystery and wanting my main characters to be mystery novelists that somehow get caught up in cases, a la Jessica Fletcher from Murder, She Wrote. For one of the main characters, I wanted to put her into a relationship quandary and them amp up the issue to provide her with growing angst throughout the story. Another novel I wrote and plan to publish, Empty Swings, came from writing the bus home one day and seeing a swing set in a park. Only one of the swings swayed back and forth, and in watching that, this empty feeling came over me. I wondered what it would be like to have a swing set in my yard but to no longer have the children to swing upon it. Another novel that I’m working on, INSIDE, came from stories about young girls being abducted and me wondering how their lives go on after being found. So, I guess, in a way, many of my ideas come from snatches of real life that I attempt to figure out, understand, and fictionalize.


What is the key element in your character creation?
Not sure if there is a key element; I do try to make sure that my characters are flawed. No one is perfect, and I can’t let my characters be. When I am working on dossiers for the main characters, I spend some time thinking about whom each character is and what flaw would fit with them to be troublesome in the story and realistic for the readers.


What was your biggest influence that steered you towards writing?
My imagination and the need to escape real life. That’s the honest truth. I started writing when I was ten and became “serious” by the time I was in my late-teens, early-twenties. Life hasn’t always been easy, and my life and my need to be OK influenced me to write to get things out of me. As I got older, the influence came from the MFA degree I pursued. Studying the elements of fiction, reading great literature and analyzing/discussing it, having my own work critiqued, and writing a novel to be approved of to graduate all influenced me in how I write and what I write.


I have to ask, what are the hardest scenes for you to write?
Hardest scenes? Any scene where I have to hurt the main character. My characters are very real to me, and when I have to place them in dangerous situations or hurt them or hurt someone they love, I have to mentally prepare myself for that.


Are sex scenes difficult for you to word?
No. When a sex scene is needed in the story, it comes as easily as the rest of the writing. I would imagine, though I’ve never had to deal with this, that it might be difficult to word sex scenes if they are not integral to the story and you are just writing them for OMG factor.


Do you see yourself writing in another genre?
I DO write in other genres. I started writing in women’s fiction. I also have a few Christian fiction works written. I don’t really fit into any one genre. For me, the goal is to develop real people with real lives and problems and to see where their stories go.


Has your family been supportive?
My family has been supportive since day one. My sister and I have a running joke between us because she always wants to read my synopses and from that says, “That was a really good book” as if she read the whole thing! LOL My mom is my biggest supporter, and my brothers respect what I do. It does mean a lot to me that I have my family’s backing.


Are any of your characters reflective of you?
All of my characters are reflective of me. From the protagonist to the antagonist, there is some part of each that connects to who I am. I think, overall, the main characters of my stories share a lot of my qualities – what I am “for real” and what I would like to be like.


What do you like to do when you're not writing?
I’m a sports fan, so I love watching sports: baseball (collegiate and professional), basketball (mostly collegiate), football (collegiate and professional), and golf and NASCAR. I also enjoy going to the neighborhood cafe to my chocolate-caramel latte, book snooping, and people snooping. I love spending time with my family, learning more about social media and virtual worlds, and finding ways to improve myself.

Who is your favorite book heroine?
Sugar from Bernice McFadden’s novel (also my fave book), Sugar. She is hard. She is soft. She is strong. She is weak. She is competent. She is wanting. She is desired. She is hated. She is everything and nothing all at once. She’s so real to me, and when I see her on the page, I swear I see the page breathe.


Do you have any unusual habits that revolve around writing?
Not really. LOL. I almost wish I did having read the question! Some might think my visual writing/editing is unusual. It’s a whole process for me. When I’m in my writing element, I take time to lay, turn on the mind’s screen, and let the movie of my story play as I talk edits and rewrites into it until it looks how I envision the story unfolding.


What is your favorite mystical creature?
Actually had to think about this one! I think my fave would be the Siren. She is such a modern mystical creature. I think there are plenty of men that have stories about listening to the sweet sounds of words that escaped a women’s mouth and led them to their demise. LOL


What were some of your biggest challenges at the beginning of your career?
Even though I’ve been writing for a LONG time, I actually feel that I’m just in the beginning of my career—at the very onset of it, actually. Earlier on, rejection dismantled my belief that I could do anything with my writing, and several times I had to talk myself into try, try, trying again. With the release of DDIW in 2010, my debut solo novel, I finally felt like I was on the precipice of having a writing career. Now, in 2012, I kinda feel like I’m actually attempting to live the career as I have planned to release several of my works myself while releasing my mystery novels through another pubber.


How do you feel about reader comments?
I take them with a grain of salt. I’ve had comments that I know were written by people who just wanted to hurt me; the comments had absolutely nothing to do with the story and all to do with a person’s opinion of me. I’ve had positive comments that thrilled me beyond belief, and I’ve had criticism that actually made me think and want to learn and develop myself further.


Do you have any advice for new authors?
Love what you write—if you don’t, readers won’t. Live to become a better writer—writers should be lifelong learners of the writing craft. Study the publishing arena—not so that you can write to trends but so that you can become knowledgeable of what’s going on around you.


Where are your books available?
Death at the Double Inkwell is available digitally (via Amazon) and print.


Into the Web is available digitally: http://goo.gl/rV2Hr

What can we expect from you in the future?
A new Double Inkwell series book (in 2013) for sure.


This year, in October, I will be releasing La Doña Rising, a story about a young woman who is shielded from her family’s crime connections but after a tragedy finds her quickly learning the ropes as she seeks revenge. Her actions might be the end of her life—and the lives of those around her.


There are a few shorter works due out, too, and people can learn more about them at my website: http://shonellbacon.com.

Thank you so much for having me!