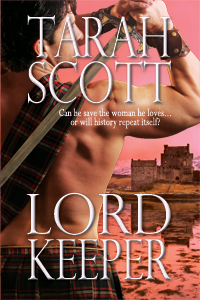 No man bargains for war when he chooses a bride, but when he steals her from holy ground, he can expect nothing less.

A midnight race for freedom leads Victoria Hockley, the Countess of Lansbury, to a churchyard deep in the Scottish Highlands. But not even hallowed ground can save her from the devil who’s pursued her from England, or from the furious Scot who swears to protect her.

Iain MacPherson swore he was nothing like his father, but his kidnapping of Victoria Hockley shows the same kind of obsessive jealousy that sent his mother to an early grave. Now Iain has hell to pay, and the devil may very well be the noble English lass who has bewitched his very soul…
Show More
Show Less
My Review:

Yes Yes Yes!!!  This is hands down my favorite book by Tarah Scott yet, and I have enjoyed quite a few others!!  It begins with our fierce but fair Lord Iain speaking with the priest.  He is having a hard time concentrating on the conversation as his attention is directed to the lovely vision behind the priest.  Who knew a sudden yearning to resurrect an old custom would flash into his mind? All he knew was that he had to have her.  And this lovely woman was going to his for keeps!!

Trying to escape the pain of her past, Victoria seeks solace in a church. He husband is dead and her brother-in-law has plans for her that she wants no part of.  After finally finding peace in the church, it is ripped from her by a savage barbarian who makes off with her.  She is dragged into the into another situation that she has no control of and wants nothing to do with.  But has this bold Highlander have what it takes to melt this English beauty's frost?

Who doesn't love a good Highland romance?  The thought of being swept away (in this case literally) is undeniably romantic.  Victoria was abused by her husband and expects all men to treat her the same.  She wants nothing to do with marriage and its messy entanglements.  Iain may just be the man to help her see past all the pain.  But can he save her, only to lose her again?  Or are second chances possible?  This book was great!!  It had an incredibly thickly layered plot that I was surprised by plus delightful characters and fast-moving engrossing situations.  This is a must read to all highland romance lovers!!

More men in kilts. I can't wait to read this ... added to the TBR list!

Added to my wish list love a great Scott story...

Yummy A Scott showing his true colours. They really are a very jealous lot.

And people wonder why I love Scots. LOL, definitely want to read this one!

This book definitely caught my interest. I usually stick to paranormal romance, but have begun to read other genres too. Yet another book for my growing book wish list.