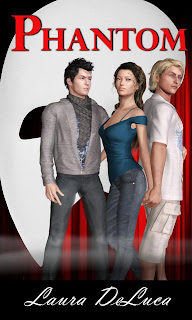 When her high school drama club decides to produce the musical phenomenon, “Phantom”,, Rebecca finds herself in the middle of an unlikely love triangle and the target of a sadistic stalker.


Rebecca lands the lead role of Christine, the opera diva. She finds herself torn between her two co-stars—Tom the surfer, who plays the lovable hero, and Justyn, the strangely appealing Goth who is more than realistic in the role of the tortured artist.


Almost immediately after casting, strange things happen both on and off the stage as people are hurt in true phantom style. Is Justyn bringing to life the twisted character of the phantom? Or are the roles of the hero and the villain reversed? Rebecca doesn’t know who to trust, but she knows she’s running out of time as opening night draws closer. To reveal the identity of the real-life Phantom, Rebecca must strip away his mask—and in doing so, risk her own life

The Phantom of the Opera is hands down not only one of my absolute favorite books but also movie (Especially since Gerard Butler plays Phantom) and plays.  But I admit that reading the book or watching the movie fills me with a sadness and hollows out a place in my heart.  Why must the phantom forever be shunned by Christine?  Why can't in one reproduction or version can't Christine run away with the Phantom?  It is a longing that has often plagued me as I wipe away the tears after she once again spurs him for Raoul. I would like just once to see my long tormented phantom have a happy ending.  Rebecca shares my passion in this.  She has been in love with this production for as long as she can remember.  Rebecca has spent her highscool years doing her best to disappear amongst the other teens.  But when she discovers that the senior play is going to be Phantom, she knows she must find the courage to try out.  She has every song and every line from the book and the play memorized and can hit all the high notes perfectly.  But can she tap down her fear of the spotlight long enough to blow the competition out of the water?

Tom is the All-American basketball/surfer star in the highschool and the one guy Rebecca has always had a crush on.  He always excels at everything and has always been active in the drama-club, which usually results in him as the lead role.  But that all changes his senior year.  A new kid has moved into town that posses the haunting voice that is needed to play the Phantom and knocks Tom ambitions out in left field.

Justyn is an eccentric, artistic teen that has recently moved to their small town.  He prefers to dress all in black and has perfected the Gothic vampire look minus the teeth.  Upon discovering the senior play was going to be Phantom, he comes out of the shadows to audition and shocks everyone with the beauty of his voice.  But after strange thing begin to happen off and on the set, will Justyn take the blame because he is the obvious choice?

I admit, I like a great mystery.  I was about half way through the book mentally checking off the list of suspects when I settled on the one I thought was doing it.  lol...I was really off because that character died exactly two pages later.  The ending was quite surprising.  I really had no clue and was way off!!  But I was delighted by that fact!  I hate predictable books!!  This was a great read.  I'm sure all fans of Phantom will love it!!

I am so glad you enjoyed my book. I think you're the first person who has read it who loves The Phantom of the Opera as much as I do, so it was exciting to hear your take on it. I'm glad you weren't disappointed!